EditorialvinesBordeaux Safari: The Story Behind The Vines 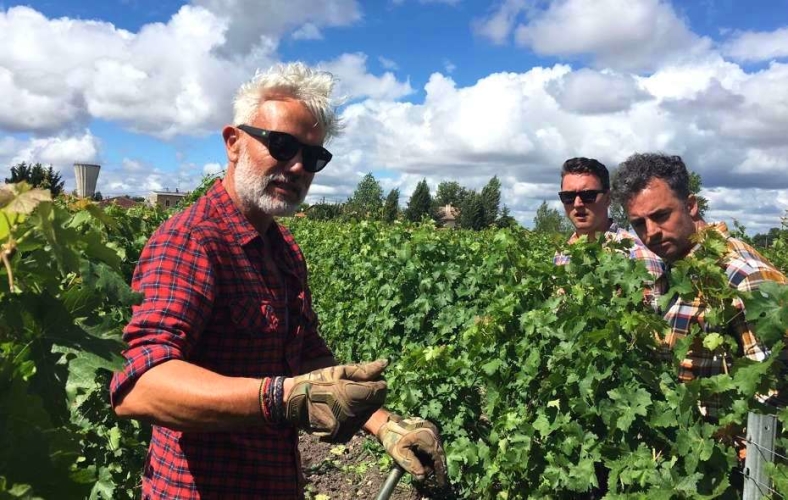 Working the vines is a truly magical thing. We are delighted to launch Bordeaux Safari, an exclusive, first-of-its-kind trip where customers can experience the behind-the-scenes management of a top vineyard, overseen by the very best in the business. 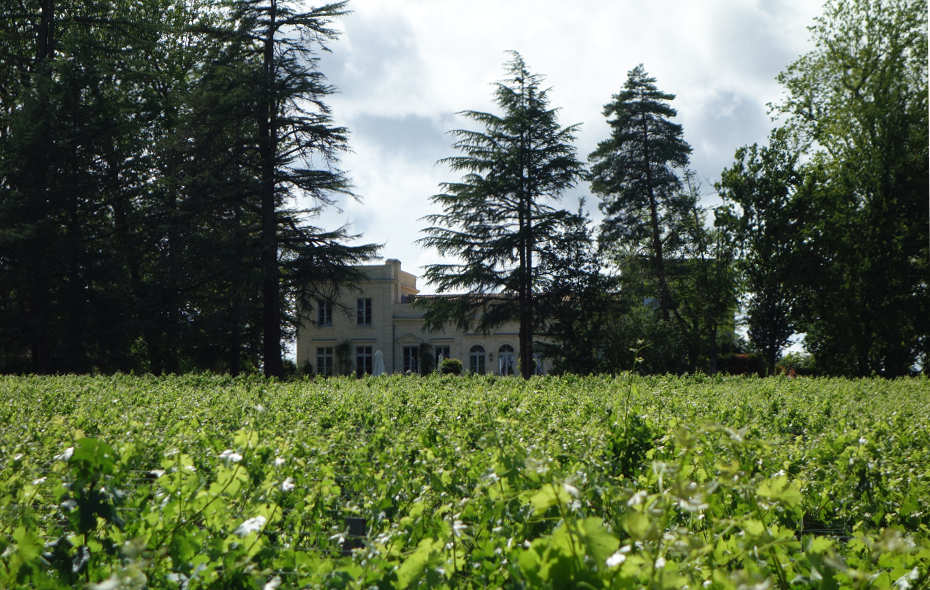 As any grower will tell you, great wine starts with great vines. While state of the art equipment and care in the winery are important, no amount of work can salvage a neglected vine.

Two men who understand this better than anyone are Marco Simonit and Pierpaolo Sirch, also known as “The Pruning Guys”. The dynamic Italian duo lead a team of twenty technicians dedicated to training winegrowers on the best ways to care for their vines. With their flannel shirts, stylish haircuts and an irreverent attitude to the status quo, Simonit and Sirch have been shaking up viticulture ever since 2003. Not many grape growers would have the confidence to march into a top Bordeaux château and tell them they could do a better a job, but that is just what Simonit and Sirch have done, on multiple occasions. This cool confidence, paired with spectacular results, has led many insiders to dub The Pruning Guys the rockstars of viticulture, while representatives from Leroy, Roederer, Ornellaia, Klein Constantia and many more have all come knocking…

We value innovation at FINE+RARE, so we thought it was about time that we paid The Pruning Guys a visit. Although Simonit and Sirch’s team have worked all across the world, many of their most high-profile contracts are in Bordeaux, where they have Latour, Ausone and Yquem among their roster of châteaux. So, it was only natural that we headed to Bordeaux to find out more. Headed up by our CEO Patrick O’Connor and Sales Director Craig Norton, five of our senior team headed to France to take part in what our hosts aptly named a “Bordeaux Safari”…

Day One: An Introduction to Pruning at Château Haut-Bailly

We started in Pessac-Léognan at Château Haut-Bailly, where we were greeted by Marco. Tall and striking with a shock of white hair and his trademark checked shirt, Marco would not look out of place on a music festival stage. He is joined by his softly-spoken, smiling colleague Tommaso. The pair seem several worlds away from the couture suits and perfectly manicured lawns of Bordeaux.

Despite this, it’s clear to see that The Pruning Guys mean business. The first item on the agenda for our visit is an introduction to Simonit & Sirch’s unique method. The philosophy is built on four steps: 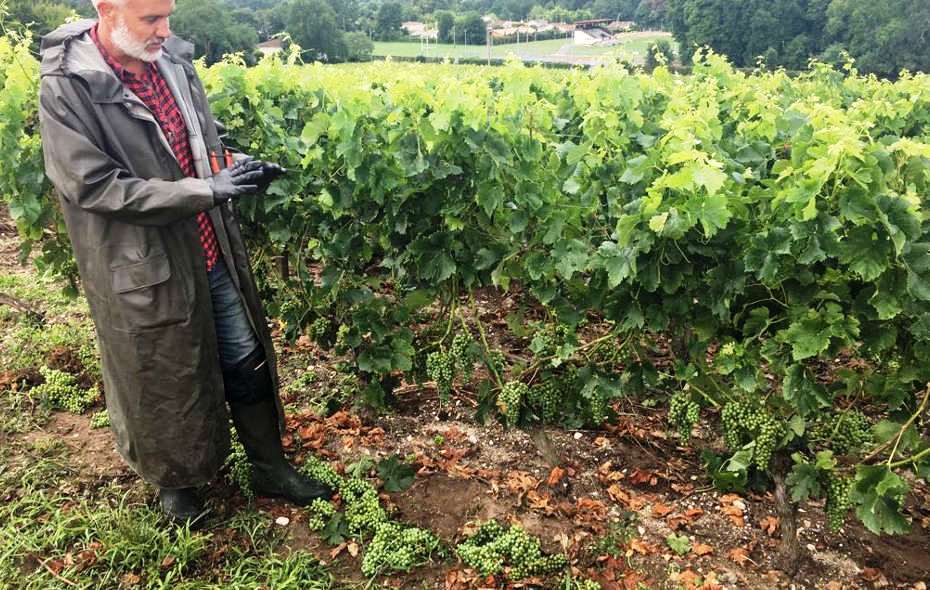 Grapes successfully thinned, we returned to the winery, where we were met by Haut-Bailly director Gabriel Vialard for a tour of the cellars. Here we sampled the ageing wine in order to experience how different types of oak barrel can affect the taste of the wine. It was fascinating to see the differences that the range of oaks could bring to the wines maturing inside. The oak helped change the texture of the wines and brought out different elements of the flavour profile; while some types of oak emphasised fruit flavours, others underlined secondary flavours and aromas.

That evening saw the perfect end to the day in the form of dinner at Château Haut-Bailly with a superb tasting, hosted by Veronique Sanders. We tasted the 2002, 2003, 2008 and 2011. The wines were showing beautifully and were a great reminder of how well Haut-Bailly performs with age. If you haven’t sampled some of your back-vintages of Haut-Bailly in a while, now may well be the time to open a bottle or two.

The second day of our Safari took us to Pape Clément in Graves where we came into contact with some of the local wildlife. Horses are an integral part of vineyard management at Pape Clément, and are used to till the soil and work the vines in all four of their Grand Cru Classé A sites. This has the dual impact of being kinder to the environment and gentler on the vines. “This is an example of how our work requires us to take a flexible approach,” explains Marco as he shows us how to harness the horses. “The addition of horses requires a bespoke approach and another set of considerations. How do the vibrations from the hooves affect the soil and vines?” 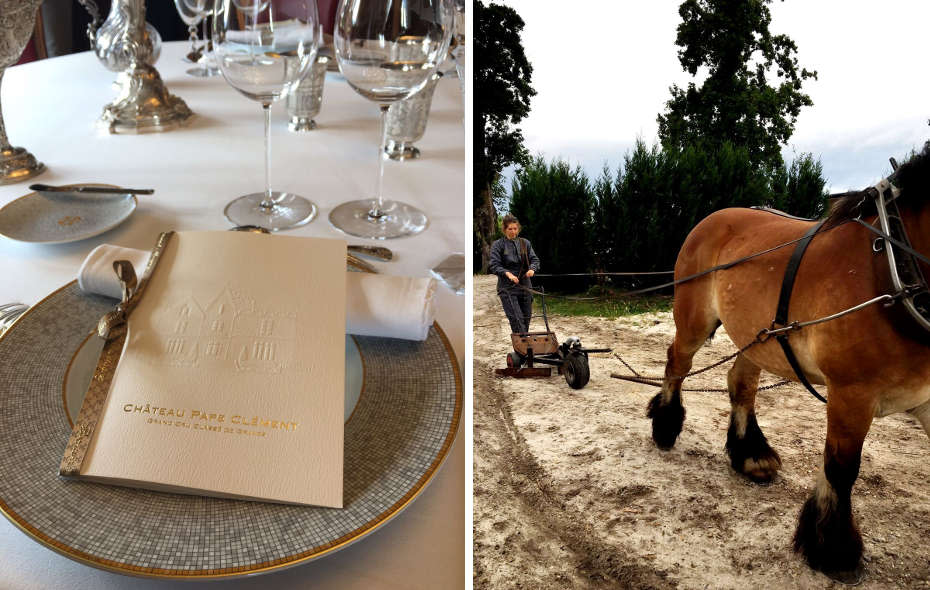 After lunch we met with Bernard Magrez’s winemaking team, including the Chef de Culture Sébastien Esquerre, who took us on a tour of the cellars and delivered a back-vintage tasting and workshop on the intricacies of blending varietals. What was apparent is that we thoroughly agree with Antonio Galloni, who said “I continue to be very impressed with both the stylistic evolution and the overall quality of Pape Clément.”

For our third and final day in Bordeaux we hopped over to Pauillac to pay a visit to Pichon Lalande. Pichon Lalande has been experimenting with biodynamic farming for some years, and The Pruning Guys have played an integral role in the process.

As such, their estate was the ideal back-drop to learn about biodynamic principles. Marco Simonit took us through the essentials and explained the theory of a biodynamic compound or ‘tisane’. 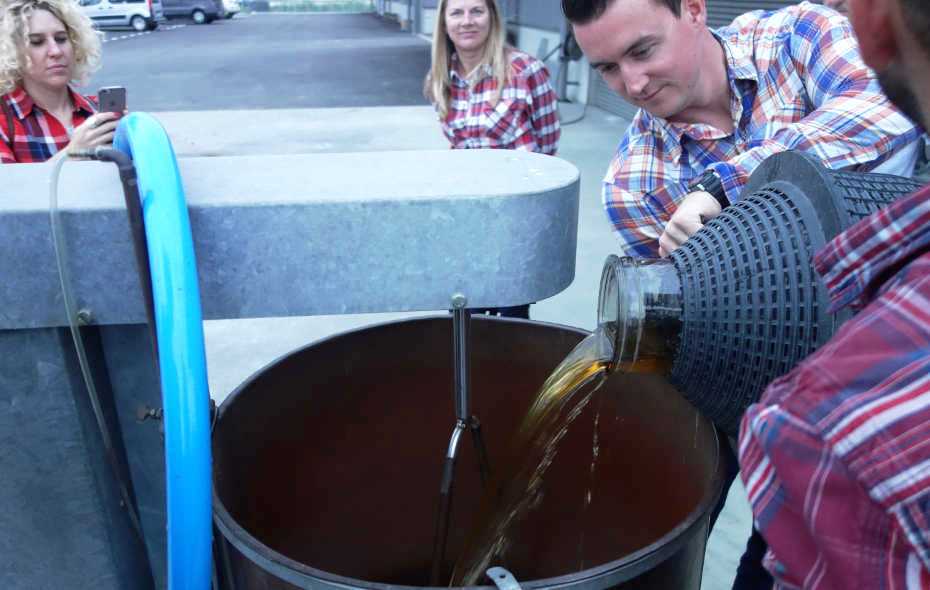 We were then given the opportunity to prepare the compound ourselves and spray it on to the vines.  “We don’t always suggest that every single vineyard goes biodynamic, it depends on the site itself. However if a vineyard is in trouble, biodynamics is one of the things we will try first.” Marco is clear however that there is more to the process than simply spraying a compound on the vines. “There are other forces at play; we also consider the moon cycles, and the rhythm at which the spraying is performed.”

The Pruning Guys take the same bespoke approach to their vine surgery. However, despite this four step framework, there is no one-size-fits-all approach. “There is no universal solution to managing vines”, says Marco. “An essential part of our work is discovering the personality of each vineyard we work on and tailoring our techniques.” To do this, they do a lot of delicate detective work, using specially-designed micro chainsaws to open up vines and diagnose its issues. “Winemakers sometimes don’t realise that a vine can be saved simply by removing the dead parts,” Marco explains, chainsaw whirring. “Uprooting a vine is the absolute last resort”. 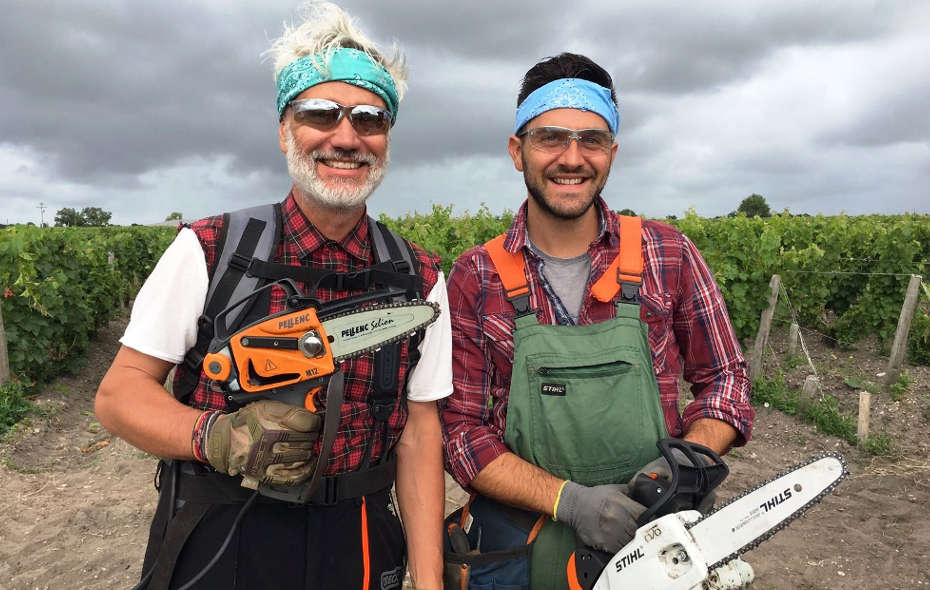 We watched as they fired up their chainsaws and, with expert precision, began to gently tweak the vines. At first, watching the process felt slightly nerve-wracking; even in expert hands, the sight of a chainsaw meeting some of the world’s finest and most expensive vines is enough to make any wine-lover baulk. However with quiet confidence and skill, The Pruning Guys soon made it clear just why they are so in-demand. They used the chainsaws to make fine and delicate changes to the vines, removing any dead or damaged wood.

After watching the vine surgery, we paid a visit to the cellar with the oenologist. Here we took part in the racking process, transferring precious wine from one barrel to the next in order to aid oxygenation, clarify and stabilise the wines.

This was followed by a tasting of Château Pichon Lalande with the Nicolas Glumineau, and his colleagues Julien Benquet and Francois Taris Loiry. We tried the 2016, 2014, 2011, 2009 and 2005 wines. The 2016 was exceptional when we tried it during En Primeur week and it is even better now, indicating that those lucky enough to have secured a case will be very happy with their choice. 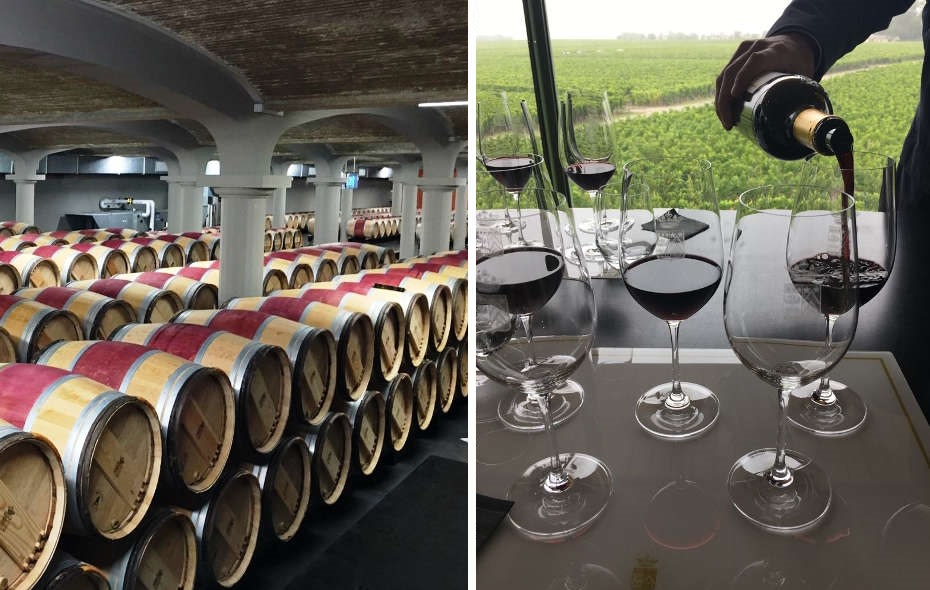 Fancy undertaking a Bordeaux Safari of your own?

The Pruning Guys’ expertise needs to be seen to believed. Starting in Winter 2017/18, we will be running similar trips to Bordeaux for select groups of clients. From working the vines and exploring the cellars to meeting winemakers and tasting the wines, these will be immersive, highly bespoke experiences perfect for the serious wine lover. If you would like to go behind the scenes at some of the finest châteaux in Bordeaux, under the expert eye of The Pruning Guys, please email events@frw.co.uk to express your interest. 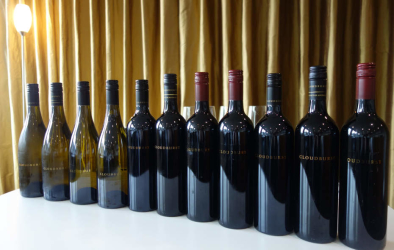