Domaine Paul Pernot in Burgundy terms is a fairly large Estate with a total of 20 hectares under vine and is the largest owner of Puligny Montrachet vines second only to Domaine Leflaive with 15 hectares in total. When it comes to Puligny-Montrachet, Jasper Morris MW reports in “Inside Burgundy”- Domaine Paul Pernot “could be the outstanding domaine of that appellation”. The domaine is unquestionably one of the top handful of growers in the appellation, his Pulignys have exquisite delicacy and poise but with the structure to age gracefully.

At present the majority of the wines are sold on to extremely fortunate négociants in Beaune. The remainder the domaine retains and bottles under their own name; it’s the absolute crème de la crème and quintessentially representative of Puligny Montrachet at its best. Now home to the seventh generation to work the land, this incredibly traditional producer has barely changed in the last four decades, testament to the old adage: “if it ain’t broke, don’t fix it.

The domaine wines of Pernot include the Grand Crus Batard-Montrachet and Bienvenues-Batard-Montrachet and the top Puligny Premier Crus of Les Pucelles, Les Folatieres, Clos de la Garenne and Champ Canet. The vineyard holdings in Les Folatieres are impressive at 3.08 hectares. They also produce a Meursault 1er cru Blagny. Worth noting the basic Bourgogne Chardonnay produced at the domaine comes from old vines planted in 1975 bordering the Puligny village demarcation lines. 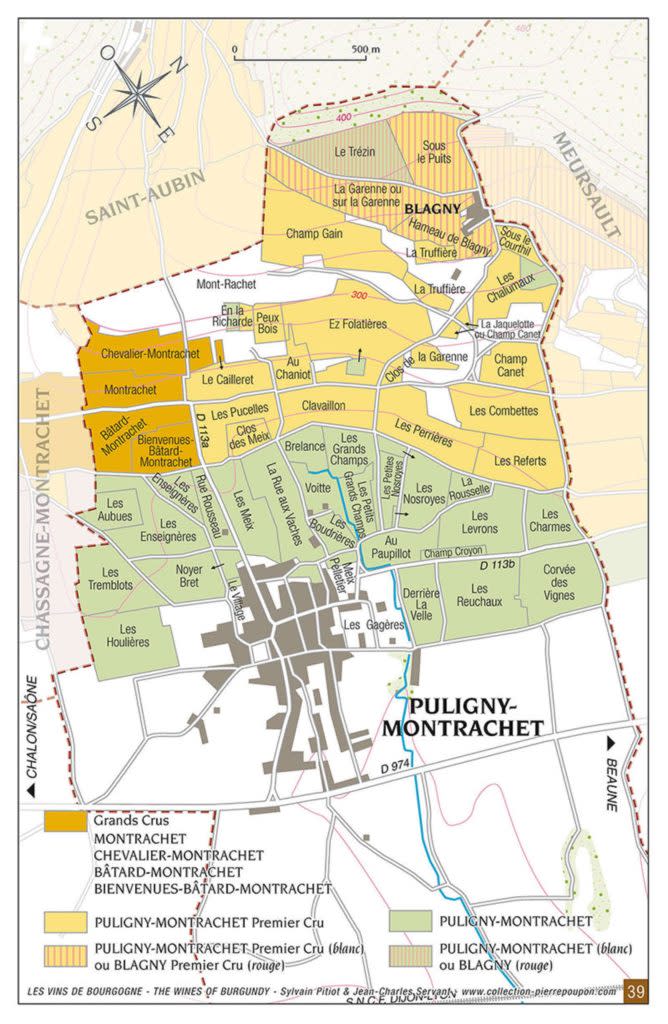 Paul Pernot is now 82 of age but still very much present on the Estate working closely with his two sons (Michel and Paul Jnr). Michel and Paul are now the legal owners of the property and are responsible for all the decisions made. Michel works predominantly in the cellar and in the export side of the business (with his daughter Alvina who has been working there since 2017) and Paul manages the vineyards. Whilst the domaine is famed for its white wines in the last 3 years there has been more investment into improving their red wines which in the past have produced slightly irregular quality compared to the highly esteemed reputation of the white wines. Other improvements in viticulture at the Estate more generally over the last 5 years include ploughing all their vineyards to control weeds and pests in order to reduce the amount of treatments and therefore preserving the natural health of the soil and the vines.

The wines are all picked by hand and the pickers instructed to select only healthy and ripe grapes “just the ones they would like to eat”. The juice is then immediately pressed from skins on arrival at the winery, settled for a day and fermented 100% in barrels. During vinification all the wines are treated exactly the same from Bourgogne Chardonnay to their Grand Cru sites. There is a restrained use of new oak as well as a relatively short elevage of 11 months. This is all done to preserve the maximum typicity of their different soils. There is also minimal battonage perhaps just 2 or 3 times during this time to help start the malolactic fermentation. The wines are fined in the 10th month of elevage and lightly filtered before bottling. Barrels are only ever lightly toasted and sourced from top Burgundy cooperage of Francois who works directly with the domaine and adapts their barrels according to each vintage.

According to Philippe the 2017s first challenge was to protect the vines from the Spring frosts and learn from the mistakes made in 2016 when vast amounts of the crop was lost. There was a huge cooperative effort in the appellation this year with winemaking teams from all of the surrounding domains out in force in the early hours of April mornings burning bails of straw and causing as much smoke as possible to stop the early sunrays damaging the buds. After the risks of frost had past the growing season passed without incident and weather remained favourable to the vine. According to the domaine the difficulty of the vintage was choosing the correct date to pick, which allowed for a good maturity while preserving acidity. The choice of the domain was to pick on September 1st. Vignerons that harvested much later than this in the region according to Philippe were in danger of producing wines with a significant lack of acidity.

Asked about the positives of the 2017, Philippe calls it a beautiful vintage, very flattering, well balanced on the estate, ready to drink quickly but still with a good ageing potential. On the negatives the wines does not have the ageing potential of the 2016s especially from winemakers who harvested too late (lack of acidity) and chose a long vinification – producing wines that are too heavy and lacking in tension.

To celebrate the opening of F+R Home in Hong Kong we purchased a barrel of Pernot's Bienvenues Batard Montrachet 2017 and teamed up with designers "With Ceremony" to produce a limited bottling of 150 magnums. The final design is still to be finalized but its going to be special. Watch this space for more details.

Recommended Producers to look out for

Asked about personal favourite producers in the region. Philippe loves Domain Jean-Baptiste Ponsot in Rully, Raveneau in Chablis, Domaine Joblot in Givry (2016 vintage superb), the Marc Roy estate at Gevrey Chambertin, Mugneret-Gibourg estate in Vosne-Romanée (exceptional quality for Burgundy reds) and the Jean Tardy estate in Vosne-Romanée (9 appellations on 4.5 hectares only). Outside of Burgundy, favourite producers include the Didier Dagueneau estate in Saint-Andelain (For us, Louis Benjamin brought the estate to a level even higher than his father) and in the northern Rhone Jean-Michel Gerin, Domaine Mathilde & Yves Gangloff and Domaine Bernard Gripa.

I asked Phillip what he thought were the biggest changes that are happening in Burgundy right now and for him the classification of the vineyards of Burgundy as a UNESCO world heritage site both in terms of trade and tourism is really the biggest development in the area and will mean the reputation of the region will only grow more global following this recognition.

A Treasure Trove Of Italian Classics Arrives At F+R