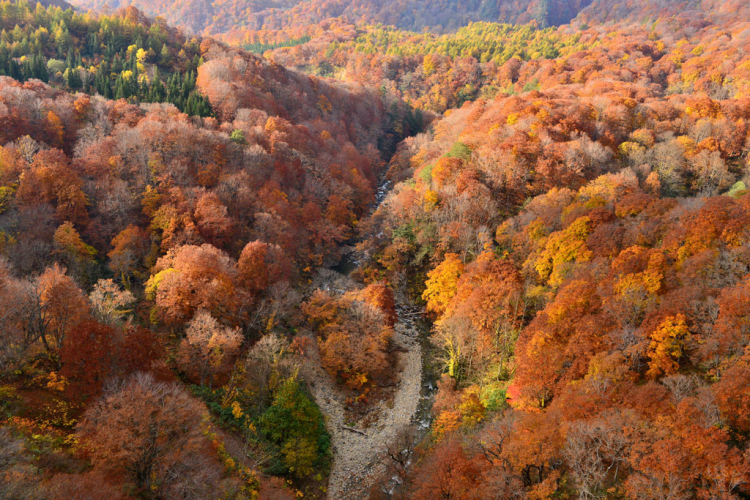 Mizunara has everybody spellbound. The Japanese oak – once relatively unknown and troublesome – is now desperately sought-after. Holly Motion speaks to some of the biggest names in the cask industry about what they really think of the mystical wood

If you journey to the northernmost prefecture of Japan you will find Hokkaidō. Venture deeper into the Japanese island’s stunning national parks and forests and you’ll find its native quercus crispula – the mystical mizunara. Measuring up to 30 metres in height, with long, curved branches and broad leaves, the Japanese oak tree is undeniably majestic.

In recent years, this humble tree, favoured by luxury furniture makers, has become an incredibly highly sought-after commodity in the whisky world for the slightly unusual characteristics of sandalwood, coconut and incense it imparts. It is so desirable, in fact, that a single barrel can easily cost 10 times the amount you’d pay for a standard Sherry cask. If you can get your hands on one at all, that is.

Mizunara hasn’t always been as desirable as it is today. In fact, track back 10 to 15 years and very few people had heard of it, let alone deigned to put their beautifully crafted whisky in it. Its popularity neatly coincides with the sudden rise of Japanese whisky and Suntory’s decision to release a whisky that had been aged, albeit fleetingly, in this Japanese oak.

What many didn’t realise at the time, and arguably still don’t to this day, is how problematic the mystical mizunara is to cooper, source and use as a maturation vessel. It takes approximately 200 years before a mizunara tree reaches the desired diameter for a cask (70-80cm). It doesn’t grow in a straight line, which makes creating staves a bit of a logistical headache for coopers. It has an extremely high moisture content (mizunara literally translates as water oak), and contains more knots than other woods, which is an issue when trying to make a cask watertight. It is also porous and prone to leakage.

It's fair to say that it’s not a natural choice, and historically it wasn’t used in this way. Japanese distillers traditionally used European or American oak to mature their whisky because they were heavily influenced by Scotch traditions. But a shortage of casks during and after World War II forced them to look closer to home, to their native oak tree.

Fast forward to today and the number of mizunara-finished whiskies is at an all-time high. As a consequence, mizunara barrels have only become more difficult (and expensive) to source.

Andrew Rankin has worked in the whisky industry for 47 years – what he doesn’t know about casks isn’t worth knowing and his connections are enviable. None more so than his relationship with one of the oldest independent cooperages in Japan, from whom he sources a steady supply of mizunara for his new Scottish Highlands distillery Ardross. He describes the Japanese oak as a “fairly recent phenomenon” that was kickstarted by Suntory – a company he knows exceptionally well from his 20-plus years at Morrison Bowmore – where they filled an “absolutely tiny percentage” of Yamazaki into mizunara a decade ago.

In the years that have followed, Rankin has been watching the mizunara market closely and is sceptical as to whether there is enough supply to meet demand. 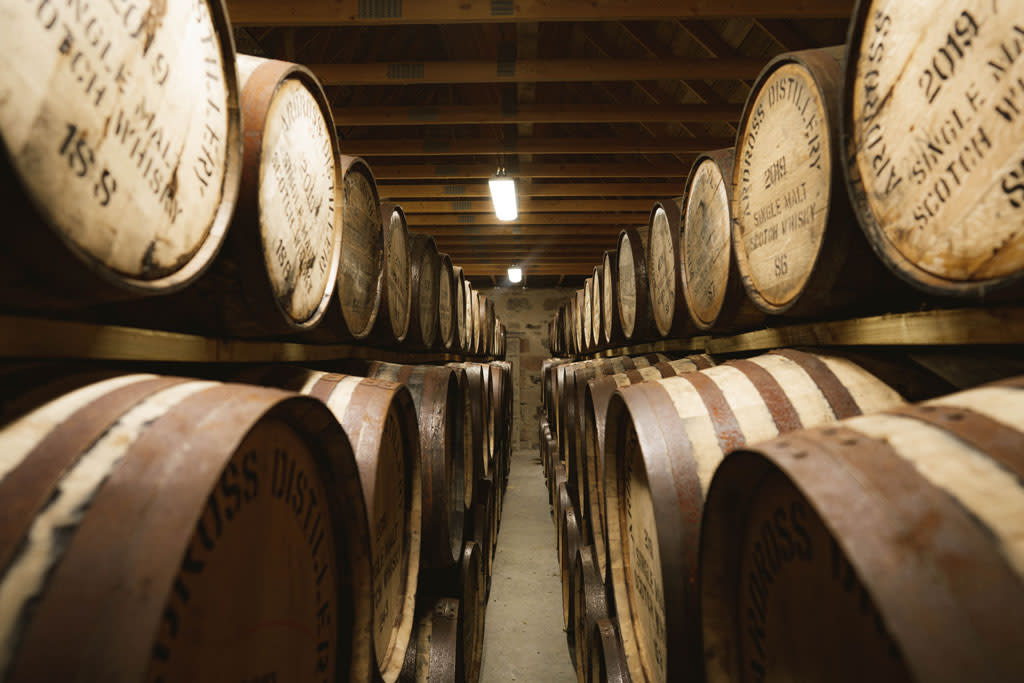 Sleeping soundly: a number of mizunara barrels were used to fill Ardross new-make in 2019

Even with his connections, Rankin says he doesn’t get a committed volume of mizunara each year because it is dependent on the level of deforestation and the quality of the wood. “We were due to get 20 [barrels] in at the beginning of this year,” he says, “but we still haven’t got them because of selection problems with the wood and shipping problems.” He’s hopeful they’ll arrive before the year is out, but there’s no guarantee.

From the people I have spoken to, this lengthy wait is par for the course. East Asia Whisky Company’s Christian Leusder says it takes “approximately three years before you receive a good-quality mizunara barrel”. When you’ve parted with a staggering £8,000 per cask – five times the cost of a standard European or American oak barrel – it can be galling when other producers punt for a mediocre cask, which is only partly made from mizunara or is made from multiple trees, and sell their whisky for a similar price. These, arguably, poorer imitations can be with the buyer within a month or two because they take far less time to cooper and ship.

Leusder believes the “massive” difference in cask pricing and considerable delay is worth it to produce something that isn’t just “bandwagon [and] off-the-rack”.

Another bone of contention regarding mizunara is the length of time the whisky has spent in barrel, and whether the cask is fully or only partly made from the Japanese oak.

Suntory UK Brand Ambassador James Bowker says the Japanese whisky behemoth is “lucky” to have a “relatively consistent, quality supply chain” that has been established over many years. These relationships enable them to fully age whiskies in single casks rather than cask transferring or finishing.

“You’ll see this practice across our portfolio where we use mizunara,” he says. “It gives a more rounded, complex, tertiary profile rather than a simple hit of the primary cask notes.” However, Bowker is quick to acknowledge this expensive process which requires a “significant” time investment is not always possible – financially or otherwise – for some producers.

Rankin says he really doesn’t know where all these producers are sourcing mizunara casks from because they are, naturally, far more scarce today than they were a decade ago. He is also sceptical about how long some of these whiskies have spent in mizunara and believes it takes at least five years to get any influence from the wood.

“At the moment, you could put your whisky in a mizunara cask, roll it about on the floor, and say it is mizunara-cask-finished,” the Master Blender says. “And you probably know, and I probably know, that it is going on.” The people who don’t know, Rankin says, are the end consumers because producers are not currently required to be transparent about this on the label.

East Asia Whisky Company’s Leusder picks up the point. “If you look at what Chivas Regal are doing, they are producing a lot of mizunara single malt whiskies which are just finishes and they don’t actually have an age statement so you don’t know how long they’ve been in there,” he says. “And I personally can’t really taste the mizunara out of it.”

He continues: “Finishes can be gimmicky. They can go wrong. And they do not always yield the best product.”

This is one of the reasons East Asia Whisky Company dips their toe in the mizunara pool but has no intention of fully submerging its feet. Its current Macallan mizunara series stops after the third release. A mizunara-finished Springbank and Bowmore release will follow, and then Leusder says the team might try and get their hands on a younger vintage and decide to age it in mizunara until the 40-to 50-year mark, when it will no longer be a finish. 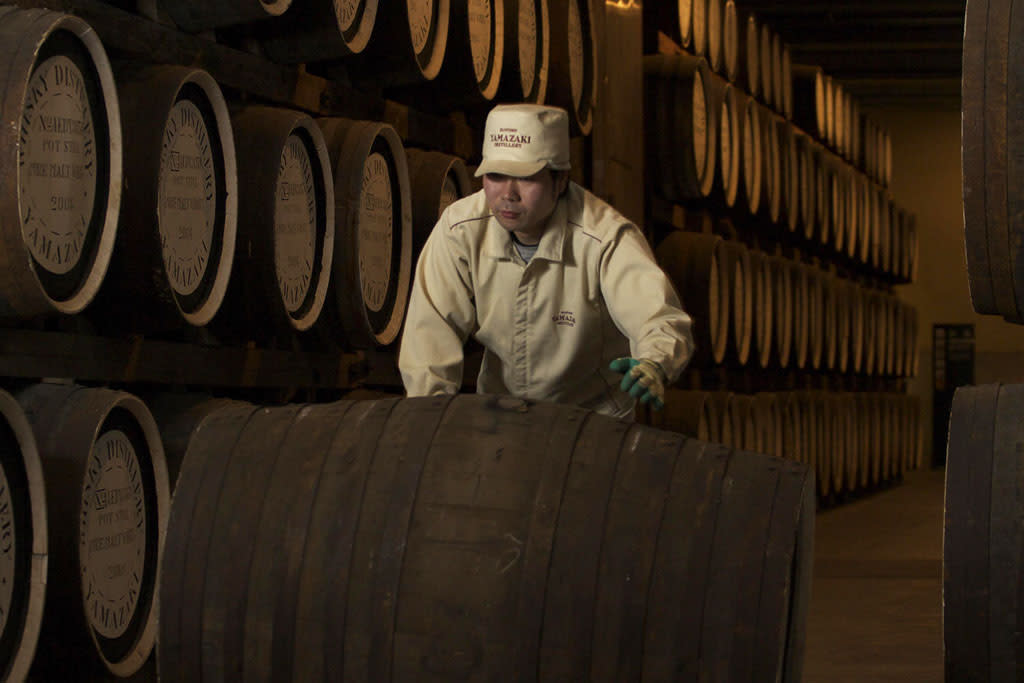 Where it all began: the House of Suntory is widely credited for the meteoric rise in demand for mizunara

Dr Bill Lumsden, the genius behind Glenmorangie and Ardbeg for the past 26 years, has pioneered experimentation on every aspect of whisky production. It is telling that he has never released a product with mizunara oak in it. He says it is the taste profile, rather than sourcing and porosity, that puts him off the Japanese oak.

“If I was to take Glenmorangie new-make spirit – and I’m neither confirming nor denying that I have done this – and mature it in a new heavily-toasted mizunara oak cask for 12 years, at the end of the day, I would have something that would probably taste a little bit bizarre,” he says.

Lumsden says he always recalls doing a tasting in conjunction with The Glenlivet Master Distiller Alan Winchester and Suntory Chief Blender Shinji Fukuyo in London when Fukuyo presented a fully mizunara-matured whisky. Lumsden struggles to remember if it was Yamazaki but remembers the taste profile with crystal-clear clarity. He describes it in just two words: “bewilderingly strange”. Coming from a man who invented the Russian-oak matured Ardbeg Kelpie, which he says has elements of “the smell of burning rubber when a car has screeched away”, this is quite the review.

Casting an eye to the future, there is little doubt producers will continue to release mizunara-finished whiskies – certainly in the short to mid term.

Leusder says he thinks it will always be popular simply because it’s so rare, but predicts there will be a larger and widening gap between high and low quality. “There will be less and less of the high and more and more of the low,” he says, “and the market will be more and more confused as to which is which.”

When pushed, Suntory’s Bowker says he absolutely thinks the trend will continue and other categories will start using mizunara. But, he adds with trepidation, that he hopes producers will “respect this special wood and ensure that consumers get to experience it at its best rather than being tempted by more affordable shortcuts as you so often see in this industry”.

For the time being, at least, it seems like the mystical mizunara is going to continue to enchant producers and drinkers alike. And, unless things drastically change, the onus will be on the whisky drinker to watch out for the sorcery and find the magical liquid that undoubtedly exists.

Browse our selection of whiskies here. 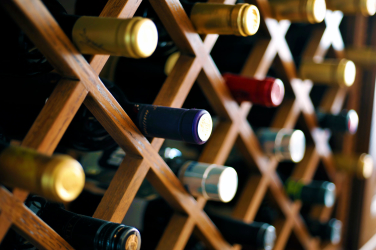 What producers are drinking this Christmas