EditorialspiritsEverything you need to know about Glenfarclas

Everything you need to know about Glenfarclas 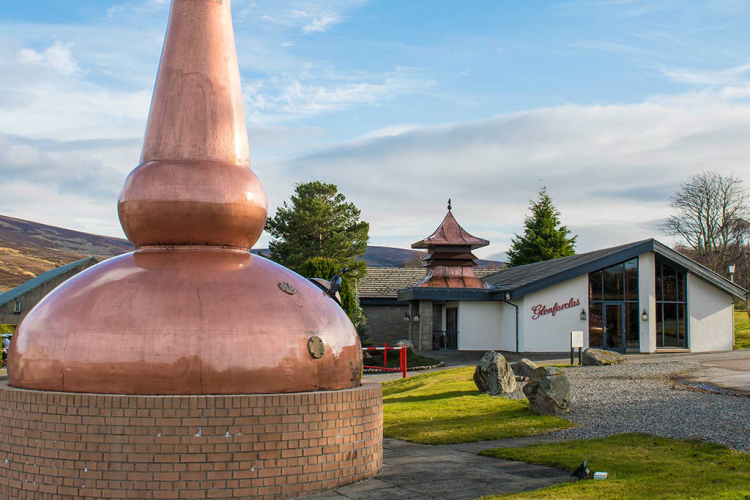 Everything about Glenfarclas is venerable. For almost 200 years, the distillery with one of the most enviable addresses in Scotland has remained fiercely independent and committed to quality. Where countless others have amalgamated and joined behemoths of the industry, Glenfarclas has remained family owned – amassing enviable stocks of aged single malt in the process.

Today, the sixth generation of the Grant family maintains many traditional practices, including direct firing its stills, to produce the highest quality, full-bodied sherried Highland single malt possible. This resolution and myriad difficult decisions made by the family during times of immense hardship have led to genuine innovation and secured Glenfarclas a place as one of the most coveted and collectable names in Scotch whisky.

But just how has one of the only family-owned Scottish distillers become such an icon and which Glenfarclas bottlings are the most highly sought after?

THE HISTORY OF GLENFARCLAS

The Glenfarclas distillery was built on the River Spey in 1836 when Robert Hay was granted a licence to distil whisky. Cattle breeder John Grant took over the farm and distillery following Hay’s death for 511 pounds and 19 shillings and leased it to John Smith who left five years later to build Cragganmore.

The site passed between Grant generations until the Glenfarclas-Glenlivet Distillery Company was formed with Pattisons of Leith in the 1890s. This partnership wasn’t to last long and Glenfarclas was fortunate to weather the Pattisons Crash in 1898 that threatened to bring the entire industry down with it. The distillery has firmly remained under the Grant family’s ownership since.

George Scott Grant is one of the key figures in the distillery’s long history. During his 52-year tenure, which ended with his death in 2002, George built up Glenfarclas’s name and brand image. George had the foresight to restrict the supply of stock to blenders and squirrel away stocks. This decision has proven extremely lucrative as Glenfarclas now boasts a depth of stock that few other whisky distilleries can rival.

John L. S Grant, the current chairman, has been with the company since 1973 and succeeded his father in 2002. The sixth generation is represented by George S. Grant who joined Glenfarclas in 2000. George works as the larger-than-life global brand ambassador, introducing the world to the remarkable Glenfarclas story and spirit.

The distillery’s fortunes oscillated throughout various whisky booms and busts. Production has increased, been scaled back, and considerable stock laid down when times were hard. Throughout all this, the Speyside distillery can legitimately lay claim to a series of firsts – it was one of the first single malts to be consistently available when others were concentrating on blends and it was among the first Scottish distilleries to open a visitor centre. It was also the first to introduce a cask-strength single malt whisky.

Today, Glenfarclas operates the biggest stills in Speyside and its Highland single malt accounts for two thirds of the distillery’s annual production – sold in more than 90 markets worldwide. 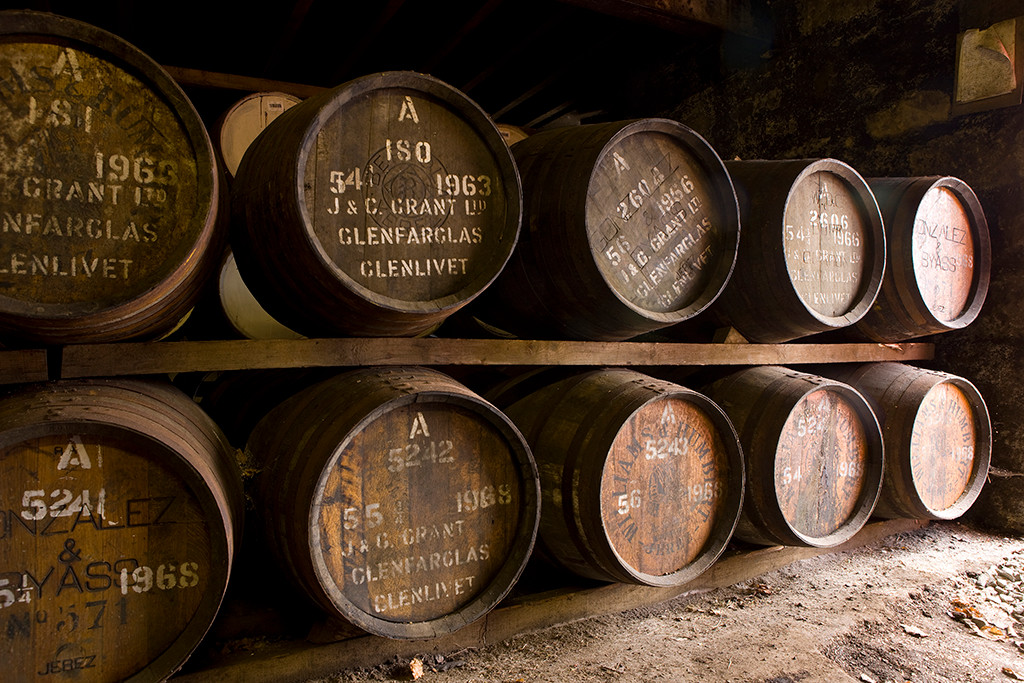 Some of the many slumbering single malt barrels at the distillery

The distillery, located one mile from the River Spey, is situated on a stretch of land that boasts the likes of The Macallan,  Balvenie,  Glenfiddich and Aberlour. The distillery sources its water from the neighbouring Ben Rinnes mountains.

Glenfarclas is famed for its full-bodied, Sherry-matured expressions. The distillery only releases expressions at natural colour, often at cask strength, aged for extended periods of time.

The unique still shapes and sizes, alongside the traditional ingredients and distillation techniques add to the distinctive distillery character. Glenfarclas new-make spirit is only ever matured in a combination of first-fill and refill ex-Oloroso casks from the highly regarded José y Miguel Martin. John Grant makes an annual pilgrimage to the bodega in Jerez to ensure his Highland single malt will eventually slumber in the finest quality oak.

To this day, all six of Glenfarclas’s stills, which are the largest in Speyside, are direct fired. The distillery team experimented with steam heating in 1981 to no avail as the family believed the final product to be inferior and lacking its characteristic full-bodied style. The distillery is capable of producing approximately 3.5 million litres of spirit annually. Normally, two of the stills are kept in reserve, while four work around the clock.

Glenfarclas has consistently released single malt whiskies of exceptional quality from its enviable stocks. The Grant family has more than 50,000 casks slumbering in its expansive on-site warehousing at any one time to draw from.

In 2007, Glenfarclas gave the world a glimpse at its incredible depth of stocks with the first release of its highly collectable Family Casks bottlings. The series of 43 (and counting) single-cask, vintage single malts spans seven decades and is highly sought after by whisky lovers.

SOME OF THE MOST COLLECTABLE GLENFARCLAS BOTTLINGS

Notable limited releases include the Glenfarclas 50-year-old (released in 2005) and the 175th anniversary commemorative bottling, released in January 2011. The latter was an impressive vatted whisky from casks from 1952 and five successive decades.

In June 2015, Glenfarclas launched the highly collectable limited expression £511.19s.0d Family Reserve to mark 150 years of the Grant family’s ownership of the distillery. The bottling was named after the amount (511 pounds and 19 shillings) John Grant paid for the Glenfarclas farm in 1865, and came with a copy of the original bill of sale for the distillery.

One of the most remarkable limited releases is the Glenfarclas Family Trunk, released in 2018. Only 60 of the leather shipping luggage trunks containing 50 bottles of 200ml single malt from the Family Casks collection, dating back to 1954, were ever produced. Today, a single trunk, available to purchase from the distillery, costs £120,000.

In 2020, the distillery released another highly collectable whisky for the Spirit of Speyside Festival, which was cancelled due to the global pandemic. Each year, a member of the team chooses a spirit to be bottled for the annual whisky celebration. In 2020, the responsibility fell to the men behind the still, and The Stillmen’s Dram was born – a 10-year-old matured in a first-fill Oloroso butt, bottled at cask strength. 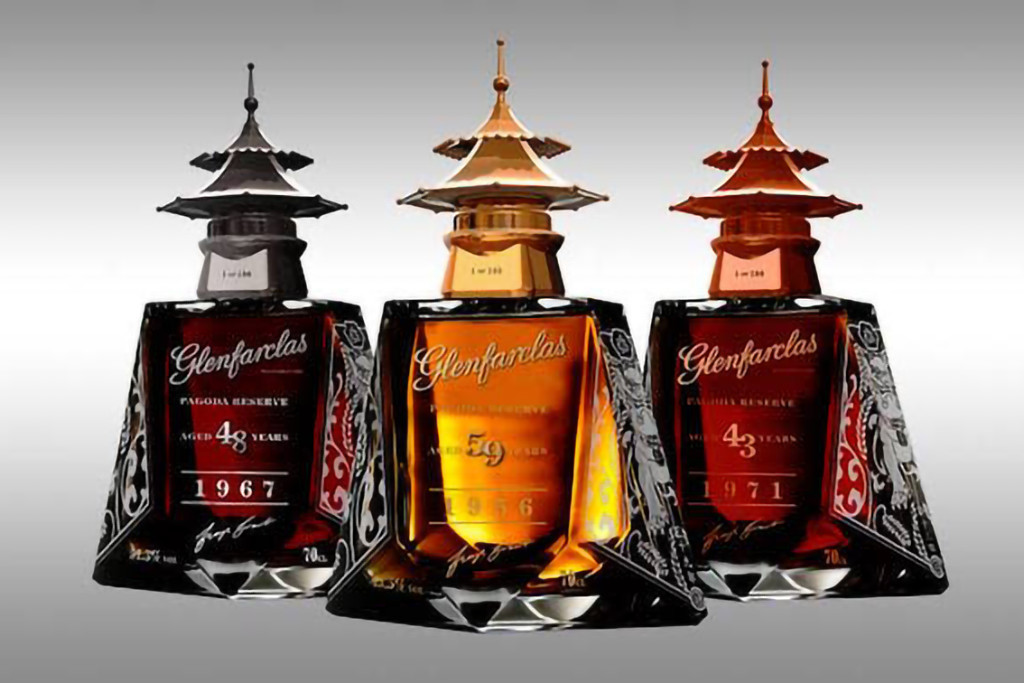 The highly collectable Glenfarclas Pagoda Series, containing some of the oldest single malts from the distillery

The Glenfarclas Family Casks collection is a highly collectable series of single cask bottlings from the family’s extensive stocks. Since the first bottle was released in 2007, the Family Casks whiskies have garnered a loyal following and become a real collectors’ item. The single-cask whiskies, which span seven decades, are some of the finest expressions from each vintage since 1954.

The highly collectable Pagoda series features two of the oldest Glenfarclas whiskies ever released. The extremely limited vintage whisky bottlings are inspired by the famous pagoda kiln which was decommissioned at the distillery in 1972. Each Glencairn crystal decanter is a unique work of art. No two are exactly the same and each element – from the side graphics to the exquisite pagoda stopper – have been painstakingly crafted. 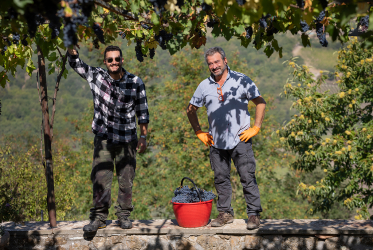 The savants of Sangiovese: Il Marroneto