Behind the Bottle: Hundred Acre

We were very lucky to have the Hundred Acre team visit us in our London office last week and to open up some very special bottles from one of Napa’s most celebrated modern wineries.

The property was set up just 20 years ago and has very quickly became one of Napa’s most iconic premium estates. The story behind the bottle is a fascinating one and shows a fearless approach and complete dedication to producing Napa wines of the nth degree of quality.

Of course for such a thing to happen so quickly in a region already crowded with premium Cabernet Sauvignon icons, it is no surprise to find out that serious investment was made into the project. But the investment has been worthwhile, producing truly extraordinary results. The approach has been bold and pioneering in so many ways; what winemaker and owner of Hundred Acre, Jayson Woodbridge, has achieved in a relatively short period of time should be applauded.

It is perhaps the fact that Jayson is both owner and winemaker of the estate that has helped him fast-track his wine to icon status in such a short time. It is very rare for any of the top estates in Napa to actually own their land, but after making his fortune investing in geological projects in his homeland of Canada, he used his accumulated wealth to buy premium vineyards in the region. Whilst most iconic Napa wineries buy in their fruit and are therefore perhaps over-protective and conservative with what they do with it, Jayson’s complete ownership means he has more freedom to experiment. The fact that he can afford to experiment has enabled him to push the boundaries of what is possible in the region.

Another amazing part to the story is that Jayson is completely self-taught and has honed his skills on a purely trial-and-error basis. What is extraordinary is the restraint he has shown in identifying what to release on the market. Only the very best wines made at the estate are ever made available. Whilst it seems hard to believe a novice vigneron could produce so many top wines, he argues it is the thousands of mistakes - and resulting wines he never put onto the market - that has protected the reputation of Hundred Acre. At the same time it has enabled him to continue to experiment, learning what does and doesn’t work in these vineyards and the winery. His tireless experimentation has seen him push boundaries to extraordinary levels.

One classic example is the “deep time” wines made at Hundred Acre - which we were fortunate enough to taste when they visited us in London. The “deep time” wines are made in miniscule quantities and sold only to their loyal mail-order fan base – limited to just a handful of bottles each. These wines are virtually unseen on the market and the opportunity to taste them even rarer. The “deep time project” was an idea Jayson had to find out what happens if you age wines longer in barrel than is the norm for Cabernet Sauvignon (particularly in Napa). Rather than the standard 12-18 months in oak, Jayson wanted to push it for as long as possible to find out what happens. These wines spend an amazing 48 months in barrels and remain completely untouched during that period. They are racked once prior to being filled and just racked after 4 years in barrel, protecting the wines from any potential contamination as well as volatile acidity which could be a real concern. “The most difficult decision is to leave the souffle in the oven” Jayson quips.

The results are awesome. The depth of aromas and flavours, with the clinical precision of the fruit and its pristine character, bursts out the glass. It is the layers and layers of texture in the wines that come from such extended barrel ageing which make these so breathtaking.

Another example of Jayson’s risk-taking can be seen in the choice of vineyards he purchased. His Kayli Morgan site was initially planted with Sauvignon Blanc and his decision to plant Cabernet Sauvignon on clay soil was frowned upon by many vignerons in the region. His purchase of the Eisele vineyard for a staggering $1.69million per hectare was also seen as hugely over-priced at the time - only for Chateau Latour to buy the neighbouring site for more than double the price several years later.

Jayson's precision winemaking approach is another huge factor in the quality of his wines. In his Ark vineyard, which is effectively an ampitheatre receiving 180 degrees of sunshine throughout the day, he segmented it into nine separate plots of which each plot is made up of two separate root stocks. Each block is then harvested at four different times, totalling 72 different expressions of Cabernet Sauvignon from one vineyard. Each of these 72 plots are fermented in small 500 litre puncheons – not producing enough thermal mass / heat to damage the fruit aromas and allowing for a cool, even ferment before being oaked in 100% new oak barriques. This technical detail goes a step further when you find out Jayson also set up electronic micro-misters within the water system – effectively air conditioning the entire vineyard and creating an environment that perfectly suits slow ripening grapes. The cost of such a set-up is mind boggling and the results are really quite extraordinary.

It is no surprise that the Wraith wine from Hundred Acre is the first ever wine to receive the maximum 100 points for the first three consecutive vintages made. These wines are rarely seen on the market but we have secured a small allocation. Get in touch with your dedicated F+R Account Manager for availability. 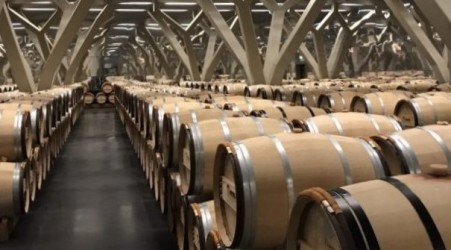