EditorialwinesKapcsandy's Roberta Reserve - Behind the Bottle

Kapcsandy's Roberta Reserve - Behind the Bottle 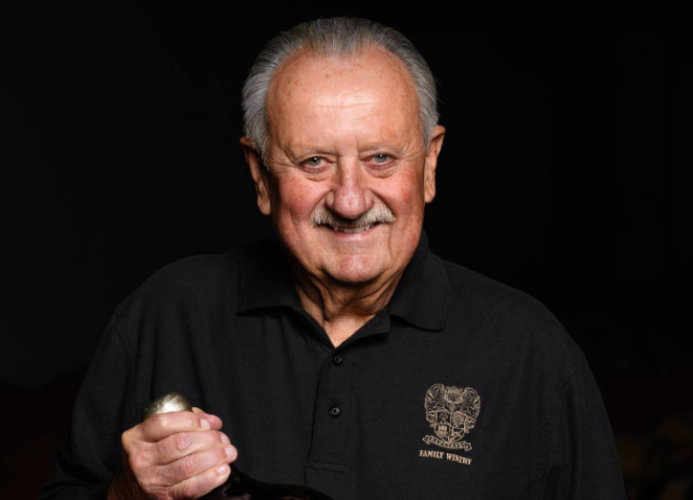 “...could easily eclipse a great vintage of Petrus in a blind tasting.”

Robert Parker (on the 2013 Roberta Reserve)

Kapcsandy Estate was set up by the extraordinary Lou Kapcsandy, a man who has lived an eventful life prior to becoming one of Napa’s modern-day superstars. At just 17 years of age he fled Hungary during the Communist Revolution of 1956. On eventually reaching America, despite speaking no english he got a job at a bakery in New York whilst at the same time studying for a degree in chemical engineering. On applying for official residence in the US he was drafted into the marines where he took up boxing before becoming a professional American footballer. Unfortunately a broken leg cut short his career.

After leaving the Marines, Lou moved to Seattle to build his fortune, setting up a construction company. It wasn’t long before Lou started to discover the world of fine wine and began to collect wines from the epic 1961 vintage onwards. He particularly fell in love with the Classified Growths of Bordeaux and began to visit and build up relationships with the likes of Chateau Latour and Leoville Las Cases, which would come to play a big influence in the development of the Kapcsandy Estate many years later.

After selling his construction company in 2000 Lou was ready to set out on his next project – setting up his own wine estate. At that time an opportunity of extraordinary fortune seemed to land at his feet. A plot of vineyards that was regularly used in the Beringer’s Private Reserve cuvee became up for sale. Lou was a huge fan of that wine and was instantly attracted to the proposition. In hindsight Lou couldn’t understand why Beringer didn’t buy the land themselves. It turned out they didn’t even know the plot was for sale and later admitted they would of jumped at the chance if they had known. The vineyard was certainly in need of some work, as the vines were infested with phylloxera the entire plot required replanting. Fortunately for Lou he was undeterred and snapped the land up right under Beringer’s feet before replanting the vineyard at a higher density (more typical of Bordeaux densities than Napa).

“On more than one occasion, I have singled out the Kapcsándy Family Winery’s Roberta’s Reserve as one of the world’s greatest Merlot bottlings not made on the Pomerol plateau, and arguably the finest example from California. It’s a Merlot with extraordinary depth of flavor and structure, and it appears capable of evolving in bottle for at least two or three decades.”

The Kapscandy project was very much created to produce a more Bordeaux style of wine from Napa – avoiding over jammy fruit and high alcohols. The team behind the wines love of Bordeaux, as well as their background certainly helped capture a more Bordeaux-esque profile. Dennis Malbec (head winemaker at Kapcsandy) was born and raised at Château Latour, where his father worked and where he himself later began his winemaking career, before moving to California to work on the Kapcsandy project. Malbec remained in charge of winemaking until his untimely death at the age of 46 in a car accident in the summer of 2016.

Helen Turley (Marcassin Vineyards) was in fact the winemaker at Kapcsandy for the first vintage and her husband John Wetlaufer is credited with helping organize the re-planting of the new vineyards. Lou credits Wetlaufer for convincing him to plant his vines in a north-south row direction. At the time this very much went against convention in the region but these days many wineries are now following suit. This exposition is believed to offer more uniform ripening of the fruit and prevents grape sugars from racing ahead of phenolic ripeness.

For the Kapcsandy team, the high density planting encouraged smaller berries and higher skin to fruit ratio which in turn provides more structure and concentration of tannins as well as higher flavour intensity in the grapes.

“when I say that the Roberta’s Merlot is reminiscent of Pomerol, I’m not talking about a plump, jammy version from a fringe area of this small appellation. We’re talking about a powerfully structured, deep, long-aging wine like Château Pétrus.”

The first Roberta Reserve was first produced in 2005 and was initially awarded 94-96 points by Robert Parker, but on a tasting 10 years later he re-scored it 98 points describing it as a “beautifully, lush, succulent, generously endowed wine”. A pretty incredible achievement with such young vineyards.

The wine consistently scored in the high nineties but gained legendary status when it was awarded its first 100 points from the Wine Advocate with the 2013 vintage, Robert Parker stating it “could easily eclipse a great vintage of Petrus in a blind tasting.”

The latest release of 2016 whilst perhaps not hitting the heady heights of the 2013 still receives heaps of praise from Lisa Perrotti-Brown at the Wine Advocate describing it as “simply profound” awarding the wine 98 points.

If you missed the latest release, get in touch with your account manager to register interest for your 2016 Kapcsandy allocation. Click here for availability of previous vintages.