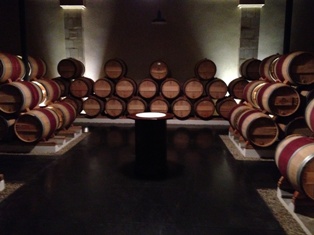 2013 has been a challenging vintage for most of France. Much of Bordeaux has been affected by storms earlier in the year, resulting in considerably lower yields for many. Luckily, at Rauzan Segla not too much of the crop was lost. This has helped the chateau overcome what was looking to be another major concern for the vintage: rot. The unpredictability of the weather has also resulted in uneven ripeness; my perceptions are that 30% of the crop was instantly discarded.

At first glance, it was evident that Rauzan Segla was in a strong position to tackle the difficulties. When looking at the vintage as a whole, the success of each chateau is dictated largely by their ability and commitment to react to the challenges that the weather has laid down.

Come harvest time, the hard work can be separated into two primary teams: the pickers in the fields and the sorters at the ‘Table de Trie’. The picking teams have been established for years, and generations of families work the harvest together. The sorting table was operated mostly by those that commuted from Margaux, giving a real sense of local flair to the affair. With very much a family feel to it, there is a sense of responsibility fed down from John Kolasa, to produce not just a profitable year, but a wine that they can all be proud of.

The work in the fields is truly back breaking. Being 6’4, the grapes hung at roughly mid-shin level for me and you spend roughly 80% of your time bending over and inspecting the grapes. With temperatures at times soaring up to 30’C, I quickly gained appreciation for how hardy these people are. Whole bunches were cut, inspected and collected for the sorting table. Bunches deemed of insufficient quality are simply discarded in the field.

After this, the grapes are quickly transported to be processed at the sorting table. The workers are split into two teams that operate on separate vibrating tables. The first sorted through whole bunches, picking out any individual rotten grapes that might have slipped through, including grapes that had not fully ripened. The grapes were then fed through the de-stemmer, which separates stalk from grape while keeping the grapes intact, thereby limiting any risk of oxidisation.

A second team then picked out any final foliage, stalks or grapes of insufficient quality that had managed to find their way through the labyrinth. Interestingly, a blanket of SO2 is sprayed onto the grapes for the first vital few minutes before being placed in the vats, again to avoid oxidisation.

The lunches were incredible!

Everything you hear about lunches during the harvest is absolutely true; large four course meals were served up everyday. Hearty local cuisine of duck leg and chips, beef stew and fresh salmon were followed by a selection of cheeses, more bread and dessert. And let’s not forget the wine; between the table of ten, we were ‘expected’ to polish off a magnum at every meal. Being the youngest in the team by quite a way, the onus fell primarily on me. The wine was sumptuous, they didn’t worry about labels or vintages here, but what I do know was that it was the base blend of Ch. Margaux and Ch. Rauzan Segla! After a stiff coffee, it was back to work, which would last until 6:30 – 7:00pm.

A lasting memory will always be one of John’s first words to me on my visit, “If it isn’t red, it shouldn’t be in the glass….”

John is the driving force behind the Chanel properties. After heading Ch. Latour for eight years, he has brought it all with him: knowledge, experience, exceptionally high standards and, most importantly, unrelenting passion.

After the privilege of an hour long car ride with John - which I think I will tell my grandchildren about in years to come - I felt I had finally got an understanding of what drove him. Unlike many in today’s world of business and profits, John’s sole aim is to build and establish the reputation of Rauzan Segla by producing great wines, priced reasonably, which will age magnificently. Simply put, the goal is to produce a wine to be enjoyed, not savoured for its price tag.

This was my first harvest in Bordeaux, I had a thoroughly enjoyable time and was blown away by the sheer beauty of the city and of the Medoc. Margaux is gorgeous and the town of St. Emilion is a real gem. I would resolutely recommend anyone to visit this lovely part of the world, but more importantly, to visit the chateaux responsible for some of the best wines in the world. There is simply no better way to kick start ones interest and knowledge in wine than to go to the source of where it all happens. The team were exceptionally warm and welcoming, making my time there unforgettable.