Right from the lead up to the harvest of 2019 through to the Spring of this year we have been speaking extensively to winemakers throughout Bordeaux on their thoughts regarding the progress and quality of the vintage. In November of last year at the Union des Grands Crus de Bordeaux tasting in London, it was already becoming clear this was being touted as a vintage of exceptional merit. Marielle Cazaux from Chateau Conseillante showed me her blackened hands after coming straight to the tasting from the pressing of her 2019s. She was all smiles, as she has been since late summer, super excited about how the vintage has turned out.

Could 2019 be another great vintage? Its almost like some Bordelais are too embarrassed to admit it! For many at that time, they remained cautious to shout from the rooftops, as the real conclusive insight into the vintage comes when the wines have finished going through malolactic fermentation. 6 months on and now fully through malolactic, a quiet confidence in the quality of the vintage exudes from the Chateaux. There is no doubt the fruit quality is looking exceptional.

There are some issues which we will no doubt hear more about as we lead up to the en primeur campaign. For many on the Left Bank, volume is down due to drought causing berries to shrivel as the water evaporates. But this is not a universal phenomenon. Chateau Leoville Las Cases volumes are in fact up compared to 2018 because they had less mildew in 2019. Thanks to their positioning so close to the river their vineyards are a cooler site than most in Saint Julien and did not suffer extensively from the heat or drought. Thankfully there was sporadic rain showers at Las Cases in early August, mid August, mid September and during harvest which was perfectly timed to prevent the vines shutting down. Heterogeneous ripening was perhaps Las Cases’ biggest concern and unlike other vintages where they harvest row by row, in 2019 they were harvesting plant by plant.

Drought does universally seem to be the biggest climatic pressure in 2019. How vignerons coped with this will no doubt play a central role in the final outcome and quality of their wines. At the same time the heat spikes and the drought is something vignerons in Europe are getting more and more used to.

For some, the heat was stronger in 2019 compared to 2018, but others believe 2019 to be a cooler vintage than 2018, bar a few heat spikes in mid-June and mid-July. The vintage is undoubtedly drier than 2016 with no rain for many from June to the late September. But despite this hot/ dry weather for Emeline Borie from Chateau Grand Puy Lacoste the wines were still full of freshness. The pH levels were still impressively low whilst the alcohol level were pushing over 14%abv which is really extraordinary. For Emeline there is power and freshness in the vintage.

A very similar response came from Omri Ram at Chateau Lafleur in Pomerol. There is a real freshness to the wine with healthy pH levels thanks to cool nights and warm days throughout the summer, bar two mini heatwaves (one in June and one in July). It was also a very dry vintage (similar to 2015 and 2017) causing the berries to be small and concentrated. For Omri, dryness is a much more serious concern than excessive heat and work in the vineyard was necessary to manage this. He points out vignerons in Bordeaux these days have a much better understanding of how to deal with more extreme weather patterns brought about by global warming. At Lafleur they know what they need to do to alleviate a dry vintage. They carry out what he describes as a “surgical operation” on the vines, to reduce the risk of transpiration, keeping the vines refreshed. He removed leaves that are inside the canopy and not shading the fruit as well as cutting back the secondary shoots since the leaves are responsible for the biggest loss of water through transpiration.

It might not be normal to hear a Bordelais vigneron praying for rain prior to harvest but in 2019 the rain that fell around the equinox (21st September) was welcomed by all. At Chateau Lafleur, the rain really helped allow the vines to reinvigorate themselves. Omri states it takes 2-3 days for the vines to digest the water, then a few more days to rebuild their aromatic, tannic expression in a perfect state for harvest. Whilst it is still very early days Omri is looking at some potentially spectacular wines at Chateau Lafleur and Chateau Grand Village for the reds and the whites.

At Chateau Leoville Poyferré similarly a little bit of rain in August really helped the last stages of veraison. Prior to that the very dry weather saw their young vines get picked as early as the 16th September. The rain in September according to Sara Lecomte Cuvelier (winemaker at Leoville Poyferré) was just what was required to help the grapes in the final stages. Prior to the rain the grapes were too concentrated! Potential alcohol was measuring 15.6% abv. A week after the rain and they were at 14.6%abv.

Whilst Bordeaux as a whole still remains cautious, producers such as Chateau Lafite remain confident at the quality of the vintage, believing the fruit that went into the final cuvee has the potential to be at the level of 2009, 2010, 2016 or 2018. For Chateau Lafite, the pressed wine plays a central role in the final profile of the wine and until blending, post malolactic fermentation, will be able to assess the final quality but they are indeed in positive spirits.

As Andrew Jefford states in his latest F+R interview,  he is in awe of the progress made in Bordeaux over the last 20 years in terms of the understanding of tannins. “Red winemakers need to stop stressing about acidity and become obsessed by tannin. To learn about tannins, go to Bordeaux.” This progress has meant many vignerons are producing fantastic wines even in more challenging vintages, both in warmer and cooler vintages. Without doubt Bordeaux is basking in a golden era where technology, experience and terroir are reaching perfect alignment.

The Lafite Rothschild stable are also  really positive with their Pomerol in 2019, stating that their Chateau L’Evangile in 2019 is “finally a vintage with everything we need in volume after some difficult years, and we are very enthusiastic about the wine so far.”

In Pessac-Leognan, Chateau Haut Brion is also very excited about the 2019 vintage. What is particular and unusual about this vintage for them is that normally one of the varieties (Cabernet Franc, Cabernet Sauvignon, Merlot) outperforms the others for one reason or another, yet in 2019 all the 3 varieties were as strong as each other. Cabernet Franc is notoriously difficult for them and many others in Bordeaux, but has performed extraordinarily this year. Their Merlot also came in with good quantities of juice, which has been a problem for them in more recent vintages. They had perfect weather during flowering and the vintage remained a very sanitary one with no issues of oidium, mildew or rot.

Their alcohol levels for the reds are pushing 14.5 – 15%abv but similarly to others, their pH remains very healthy and there is surprising freshness in the wines, again they believe accounted for by the coolness of the nights. When pushed for a vintage comparison they contrast 2009 and 2010, with the acid levels of 2010. Alcohol levels may be high, but no different to their top modern vintages of  2005, 2009, 2010, 2015 and 2018.

Chateau Carmes de Haut Brion also sounded very optimistic. Their restrained style no doubt benefits from a warm vintage. To cope with the warm weather they deliberately left more grapes on the vine and de-leafed the canopy to reduce the amount of transpiration, which meant they were able to produce a wine with 13.5%abv. If they didn’t make these amendments they could of made a wine closer to 15.5%abv. The result they believe is a wine of great quality and a vintage of good quantity in Pessac. 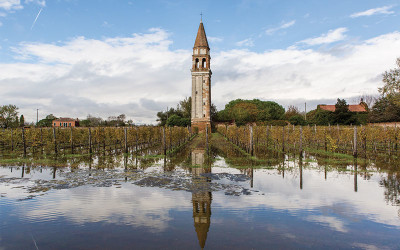