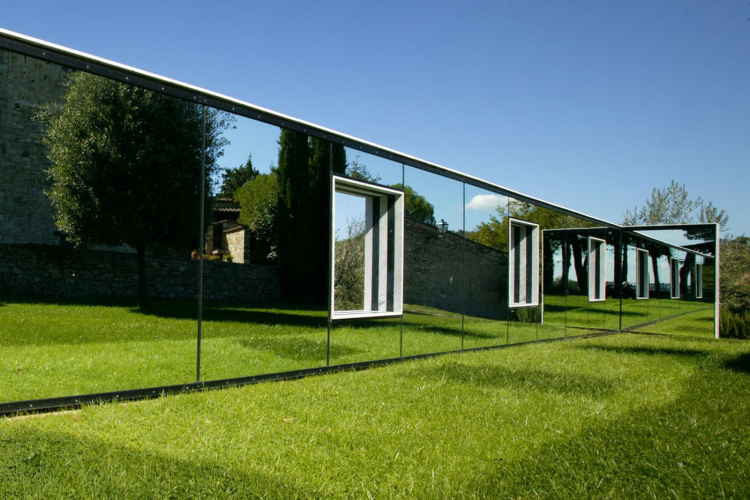 In amongst the 18th century buildings and vineyards at Castello di Ama, you’ll discover striking modern sculpture. Disruptive and disarming, the art and wine of this Chianti Classico estate is at the cutting edge. Sophie Thorpe spoke to CEO Lorenza Sebasti and winemaker Marco Pallanti to find out more

The constant tension in wine is between art and science; the best winemakers managing to toe the line between the two to create something that can be inspirational. This relationship is most tangibly expressed on the labels of the world’s most iconic wines, with the likes of Ch. Mouton Rothschild, Leeuwin Estate or Domaine de Trévallon bearing specifically commissioned works. But at Castello di Ama, art is much more than an aesthetic afterthought; it is entwined with the very substance of the forward-thinking Chianti Classico estate.

While the property has a long history – its hilltop location praised for the quality of its wines as long ago as the 18th century – the most recent chapter in Castello di Ama’s tale starts in the 1970s, when four friends identified the potential of the abandoned hamlet. It was however the arrival of Marco Pallanti in 1982, and then with current CEO Lorenza Sebasti in 1993 – daughter of Lionello Sebasti, one of the founding four – that proved pivotal. Together this duo has drawn equally on the worlds of art and science to thrust the estate to the forefront of Italy’s winemaking scene.

When Pallanti arrived, fresh from his studies in Bordeaux, the cellar had been built, the vineyards established. The winery was remarkable for Tuscany – flush with stainless steel and temperature-control technology, lightyears ahead when much of Italy (and Europe) was still making wine in the same way their grandparents and great-grandparents had. The vineyards, however, needed work, planted at low densities and on overly vigorous rootstock. Pallanti gradually transformed the vineyards, switching them over to the lyre system – an open trellis that allowed more exposure for the fruit and fuller ripening, tweaking the varieties planted and using only the finest fruit in the cellar.

While the winery has all the latest gadgetry, there are no hard and fast rules for Pallanti – it’s all about having the option to tailor his winemaking to each cuvée. This palette of possibilities is a luxury of being, in his words, a “pedestrian winemaker” – being amongst the vines and barrels all year round, able to respond and adapt accordingly. “I’m not a consultant… I have the possibility to taste the berry, taste during the ageing and can decide step by step,” he explains. In many ways science allows him the luxury of playing the artist – armed with the knowledge and tools to craft each wine. 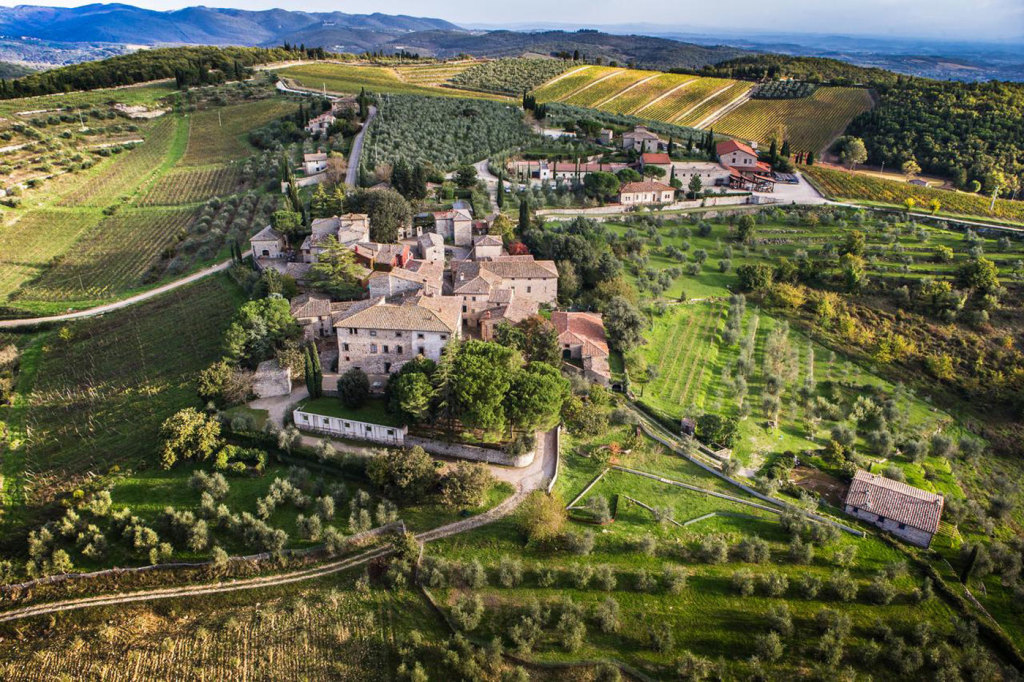 Over four decades at the estate for Pallanti, and almost 30 for Sebasti, one thing remains consistent: the importance of their role as “guardians” of Castello di Ama. “I never follow the fashion,” Marco Pallanti tells me. “It’s not about changing vats, or using another kind of temperature, or ageing more or less in barrels… but truly having more and more spiritual identity of the vines. This strong personality – this is what we have to keep. This is a gift.”

In search of this spiritual identity, Pallanti has adapted his oak usage over the years – and how he talks about it, placing more emphasis on size rather than origin. At first he worked with big casks, of 20 to 40 hectolitres, but as the wines gained in body, they could support small casks – something which he feels is important for the stabilisation of colour. His aim, however, is never for the oak to be too present; in fact, over the last decade, the portion of new oak used at the estate has been halved, as he seeks to unmask the fruit and its terroir. Their responsibility is not to fads or fashions, but to the soul of this special site.

Sebasti and Pallanti (previously married) have always loved modern art – but the inspiration for Castello di Ama’s remarkable project was the restoration of its cellars in 1998-99. Stripping it of concrete and artificial lighting, there was a huge wall just as you entered the winery with a line of large casks no longer in use. The duo felt intensely that they needed to get rid of them. “It didn’t show how we feel about the wine and the winemaking,” Sebasti explains. “Looking at this space, we both dreamed… this is a great space for a contemporary art sculpture.” They had recently been to see a Michelangelo Pistoletto show, and they thought maybe they could invite him to create something. He did just that, finishing his work L’Albero di Ama in 2000.

Since then, 15 artists – including Anish Kapoor – have produced pieces of art that are now part of the estate, gradually infiltrating the gardens, vineyards and winery. Initially the works were commissioned via the influential Galleria Continua, but since 2015 Philip Larratt-Smith has been in charge of curating the collection. The most recent addition, by Miroslaw Balka, was conceived over nine visits, with the Polish artist spending more than two months in total at the property. But every single artist visits Ama – the artwork inspired by the place and its wines, the finished pieces eventually returning to inspire Sebasti and Pallanti in their own art. “I believe our pieces of art can explain my wine better than me,” Pallanti says. 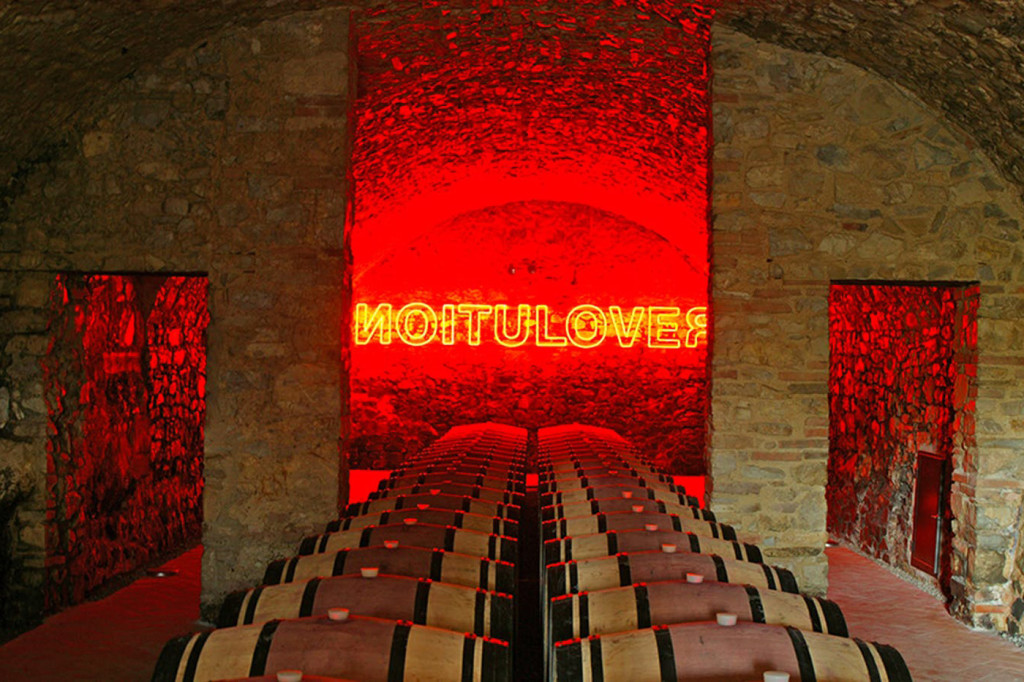 “Our dream has been to develop this collection,” Sebasti explains. “All the artists that we have met, they fall in love with the place… [They] get inspired by the story, by the history, the real methodology of our winemaking, that we don’t produce only from our vines. Somehow the art of wine and the art itself, they can have a dialogue.”

That dialogue sparked the creation of Haiku, Ama’s other Super Tuscan – a blend of Sangiovese, Cabernet Franc and Merlot. Daniel Buren’s Sulle Vigne: Punti di Vista consists of a mirrored wall, two metres high and 25 metres long, that stretches along the edge of their San Lorenzo vineyard, offering five different windows, or five different impressions, of the same site. “So strong, so powerful… it’s about wine, art, history, landscape – everything is there,” Sebasti says of the work. It was standing in front of this impressive installation that Pallanti was inspired to make Haiku, a wine which he sees as an alter ego of the estate.

These remarkable contemporary sculptures are scattered around the hilltop site, providing a dramatic contrast to the original 16th century buildings – and a neat reflection of the estate’s philosophy. “We have this grafting with the new, with the rootstock of the past,” Sebasti says. “We work in a traditional place, with traditional varieties, but for the new world, for the consumer of today.”

The latest installation will be revealed later this year, 22 years after the first piece was commissioned for the collection. “As human beings, we all live with art,” Sebasti says. “If we can bring art into everyday life, it’s a great strength.” Combining respect for their history with the latest technology, she and Pallanti are forging a path ahead, artfully curating the story, and soul, of this extraordinary estate. 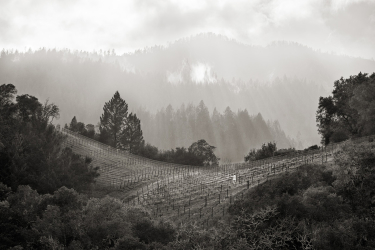