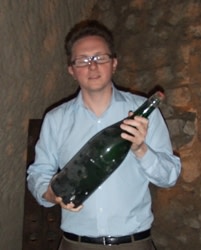 Our day 3 lecture was on the picking of grapes to bottling stages and led by the ever composed cellar master Frédéric Panaiotis at Ruinart’s recently renovated maison. (They also had the best patisseries and coffee of the week!) This test was one of the hardest for me, partly being that we had no time to review the notes the day before, so I was grateful to sit down to a tasting soon after:

Quite subtle, mainly white stone fruits on the nose, the palate leans more towards green apple but has real length and structure, with a lovely gentle mousse.

Much more forward than the R, sharp citrus, yellow grapefruit and a hint of tropical fruit. The palate is fuller with pineapple but still plenty of length and nice clean balance.

Golder in colour but the nose seems to have closed up, some hints of white Burgundy. The palate is very round with a perfect balance between complex honeyed notes and a long citrus finish. Vintages need 7 to 10 years before opening as the reductive wine making and suppression of autolysis means it takes more time to mature.

Very bright and a hint of lychee and pencil lead on the nose. Guava dominates the palate, with sweet tropical notes. Rich but the first wine to lack some length.

A whole different story here, the colour is light copper to begin with. The nose is red fruit, roses and a hint of linoleum (?) which actually makes for a nice smell. The palate is definitely roses, long, fresh, it does not finish on a wow like the 1996 but it will develop further and can last for years. 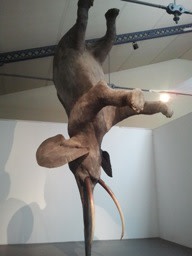 We then went onto Pommery which, from past experience, I was very excited to see as these are no ordinary cellars. Pommery host an annual contemporary art exhibition; the results are always spectacular and well worth paying for a visit. This year it was based on sound and started with motion sensored noises as we descended into full “cellar-sized” installations, which included a mechano toy orchestra, a bell covered tyre swing and the more unusual “dancing wellies” – it would be an eerie place to be alone. After photos with the upside-down elephant we went onto a lunchtime tasting of almost the entire range including:

Fresh biscuity nose and cooked pineapple, then more white stone fruit on the palate with a nice clean mineral streak and a citrus finish.

Melted butter dominated nose though there was some vanilla which was surprising since the palate was crisp and citrusy, nice length and develops Werther’s Original creaminess.

Hints of sherry, nice, marzipan flavours on the palate, clean almond finish, does not taste like 17g/l residual sugar.

To finish this afternoon session (this was when we began to suspect some competitive spirit kicked in amongst the houses in what they served…) Benedicte (2012 organiser) and Sarah opened:

With no sugar this was way ahead of its time, disgorged three years ago it held itself together with huge freshness, lots of yellow citrus but underneath some tangy truffley notes, yum.

Day 3’s evening activities introduced me to the surprise of the trip and a house I have never come across (although with new distributor Liberty I am sure this will change): Charles Heidsieck. A very private house, they do not reveal how many cases they make or vineyard holdings size, but they did welcome us into their Art Nouveau style glasshouse for a glass of:

Then the highlight of the trip… we descended into their cellars through an almost secret door set off the path that winds through the estate (they only installed a lock last year!). Passing through these working cellars – visits NOT possible to the public – we reached the “library stock room” with a fabulous bar set in the middle made from pupitres (the old bottle racks). Our host Christian went to the corner and as if by magic pulled out a jeroboam of 1982 Champagne Charlie (no longer in production) then asked who wanted to open it! Despite its age, it had a remarkably fresh nose and there were still some very fine bubbles, even if they did fade in the glass. Citrus at first soon developed to truffle notes, seeming even younger than the 2000; What a spectacular opportunity!

After this incredible tasting, we went on to dinner to the soundtrack of much hilarity and good cheer which was paired with: 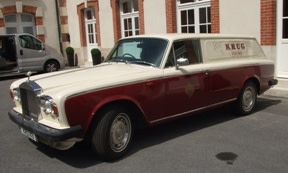