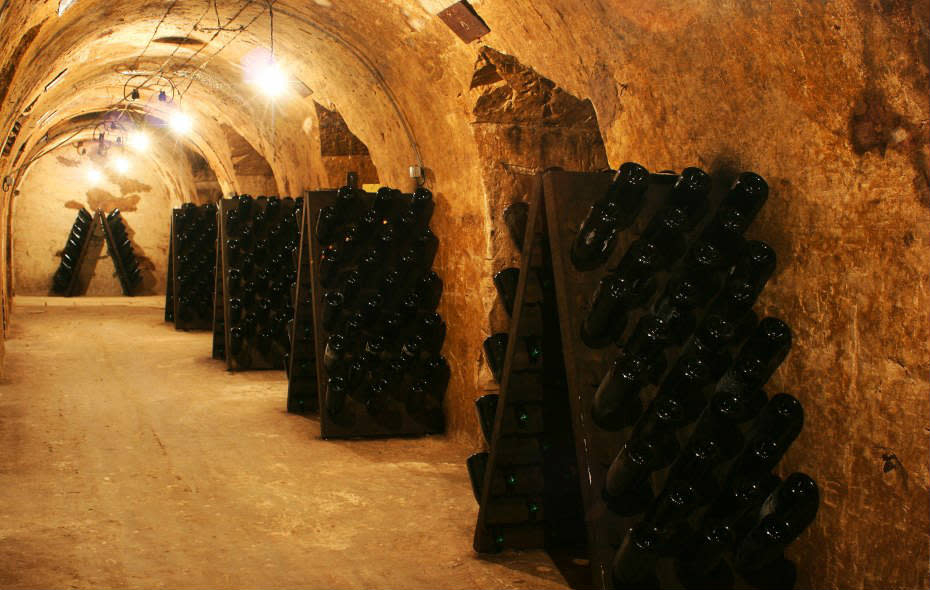 And so under heavy clouds again we trekked into the Lanson headquarters for the last lecture "From the Cellar to the Consumer" which was technically the most relevant, or at least the one we should relate to most. There were a lot of market figures to absorb so we were quite overwhelmed by the time we met the cellar master.

Today’s tasting would be another first, testing a theory I heard many years ago, “buy Lanson young and lay it down for a few years”. We tried one wine – NV Lanson Black Label - with many different disgorgement dates and the first difference was the progression from pale lemon colour to gold with the bubbles getting gradually finer:

NV Lanson Black Label (disgorged February 2012) Nose is very clean, a lot of lemon and slightly floral. Palate leads with pears and is fresh and clean. Sour finish but overall in balance.

NV Lanson Black Label (disgorged June 2002) Fresh and floral but a touch of autolysis here, something of the processed ham? Rounder and fuller and almost buttery. Less aggressive acidity and ripe pears and apricots.

NV Lanson Black Label (disgorged June 1996) Nose is subtle on this one, hint of tropical fruit and cut straw. Round, fresh and still a lot of green apples and citrus. Bit heavy on finish and with air develops bready notes.

Lunch was courtesy of G & H Mumm at their Moulin a Vent dining room in the “sea of vines” by Verzenay. One local even built a lighthouse at the top of the village, as a wink/nudge to the beautiful surroundings. We were treated to a beautiful meal, literally constructed in front of us and served with Mumm’s newly named Blanc de Blancs: Mumm de Cremant. It was fresh and pleasant, however a difficult one to pair across an entire meal. Three of the team were given the opportunity to sabre a bottle to much delight!

Being the longest day the Academy had not finished with us yet so it was off to Taittinger for more cellars. Just when we thought we had seen it all, these were a fascinating combination of the old abbey the winery is built on (picture statues of Mary carved into walls, soaring ceiling arches) and odd carvings that when you look closer are a horse, a face etc from all the past inhabitants of the site. We went into an informal tasting trying the following wines:

NV Taittinger Brut Reserve Lots of minerality, the 40% Chardonnay stands out, fresh, citrus, clean and a bit chalky, sharp green apple acidity down the sides but not a sharp finish, mainstream champagne.

2005 Taittinger Brut Subtle nose, not much standing out and same quiet character on palate. Highlights of mandarin, some sherbet, and balance is good just not stand out. Too fresh and floral to taste like vintage!

NV Les Folies de la Marquetterie (single vineyard) Ripe tropical and mandarin nose, full palate and you can taste every 9g/l in the wine. More power and body but remains fresh and has a gentle finish after the surge on the palate.

2000 Taittinger Comtes de Champagne (Blanc de Blancs) Now we get to the real vintage, subtle nose and a hint of hazelnut. Palate is honeyed, rich in Chardonnay and round (was starting to flag at this point in the day!).

2002 Taittinger Comtes de Champagne (5% spent at least 4 months in oak) Lemon meringue pie nose then fuller wine, stone fruit, fresh, round and surprisingly more ready than 2000 to approach, weight is there at the end but still development to go.

And onto a very glamorous evening with Louis Roederer at another family owned house where we moved from elegant room with stunning canapés to elegant dining room with unfettered extravagance from the chandelier to the solid gold cutlery! The food and wine matching was divine and we enjoyed over this evening:

As if this evening was not special enough, we were whisked away to be outside the cathedral at 11pm for a spectacular light display on the façade that picked out every detail of the intricate carvings. I have never seen anything like this and we were speechless throughout the whole 45 minutes. This is only the second year of the show but if you are making a visit try to make it during this time to see this remarkable display.