Two magnificent vintages back to back: after the powerful 2015 comes the stellar 2016 - a standout for its purity and elegance.

After tasting the first major 2015 releases last year it was clear this vintage in Tuscany was something very special. When wines like Solaia 2015 scored their first 100 points from the Wine Advocate and other iconic wines of the region such as Castello Di Ama’s single vineyard Bellavista 2015 scored its highest score since the 1990 vintage it was clear that at the top level the wines were exceptional. On tasting more and more wines from the vintage throughout last the year the consistency across all price points was impressive. This was without doubt a vintage to go long on.

But just a few months on from the major releases of the 2015 vintage, the reviews of some of Tuscany’s icons in 2016 were released and again the scores were the highest ever received for many of these top wines, including a perfect 100 score for Sassicaia - something only ever achieved once before with the 1985 vintage (a wine Robert Parker still describes as one of the finest wines he has ever tasted).

Our visit to Tuscany last week confirmed that the 2016s are as strong as the 2015s and in some cases exceed their already exalted standards. Francesco Ripaccioli of Canalichio Di Sopra believes there hasn’t been a time in the modern era of Tuscany where they have had back to back vintages at the highest quality level. Even 2017 is looking pretty sensational and if it weren't for the almost perfect conditions of 2015 and 2016, 2017 would also come highly recommended. Although early days it seems the 2017 will be destined to live in the shadows of the two previous vintages that will go down in history as some of Tuscany’s finest.

"After the big and opulent 2015 vintage, 2016 is very pure and classical. It is a winemaker's vintage" - Francesco Ripaccioli, Canalicchio di Sopra

Speaking with many winemakers in the region on our visit last week, much of the top regions of Tuscany in the recent past have been affected by the trend to produce wines with a high level of ripeness and a healthy dose of new wood. There have been magnificent wines produced as a result, but this has not always been the case and these days a more technical approach has been adopted. Wines are less affected by winemaking with the focus more on precision viticulture and the production of terroir driven wines. This is no surprise, it is the trend of all fine wine regions of the world today, but combine this more technical approach with the two vintages Mother Nature blessed Tuscany with in 2015 and 2016 and you have arguably some of the finest wines ever produced in the region.

The technical terroir driven approach has not only brought greater fruit clarity to the wines it has also accentuated the very distinct and unique characteristics that set Sangiovese apart from any other fine wine varietal. Prone to over extraction, and green tannins at higher yields, when handled correctly it produces some of the most beguiling aromas of any wine - bright cherry fruit, crushed dried flowers, exotic Asian and Mediterranean spices and teas as well as crushed rock mineral salinity. It is blessed with a mouth watering acidity and when handled with care, a beautiful medium bodied mid palate weight.

"We had a perfectly equilibrated vintage in 2016 as it was not too hot." - Federico Staderini

In the best of the 2015 and 2016s, the tannins are incredibly fine, silky and fully integrated. This structural architecture allied with vibrant acidity gives the wines great ageing ability.

With the 2015 Brunellos not to be released early next year, now is the time to stock up on the top 2016 Super Tuscans, Chianti Classico and Rosso di Montalcinos. Look out for our offers to follow early next week. 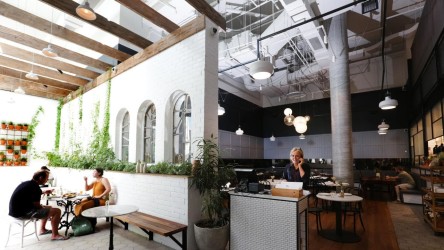