After two fantastic vintages under its belt the Bordelais certainly have plenty to be smiling about but perhaps most pleasing for the consumer is to see that at least some of that money made through the recent campaigns has been re-invested into the wineries. There is no doubt key players in the region are committed and proactively improving the quality of their wines, embracing technology and science to better what nature has given to them through their terroir. From a region in which heritage and tradition exude from the grandeur of turrets and towers, it is behind the castle walls that you find futurism and innovation.

Nowhere is that more noticeable than in Chateau Pichon Baron. On our whistle stop tour in preparation of the Bordeaux 2017 campaign we were fortunate to drop in with Jean-Rene Matignon (technical director at Pichon) and not only get an insightful synopsis of the 2017 vintage but also to see the new innovations and experimentations being carried out at the winery...

Here, like in many top Bordeaux chateau who can afford to, the estate has made great strides into off-setting the weather, the one key element in the winemaking process one can't control. Whilst the battle between Mother Nature and machine is still very much one-sided, there are innovations that can at least make the best juice possible with what one has been given.

Jene-Rene described late April as something of a warzone in the region with winemakers throughout the region setting light to anything that burns in an attempt to reduce the affects of the frosts, the sky full of helicopters using their cyclonic powers to do what they could to disturb the frozen air burning everything in its path. Pichon Baron (like most of Pauillac) was fairly lucky due to the close proximity of the river and being on a raised plateau with the cool air flowing down away from their vineyards. Even a gigantic propeller from a neighboring estate helped further disturb the air enough to make losses minimal.

Helicopters and wind machines were the technology called upon in the hours of need in April, however during the winemaking process other inventions come to forefront. 2017 has been described as a heterogeneous vintage and that meant the infamous optical sorters that every Chateau loves to display on a visit, came to be of greater significance. With uneven ripening within the same vineyard it was important for the sorters to do their thing, using laser technology to identify the density of each and every berry and to select only berries that have reached optimum ripeness. It was this sorting phase, not the frost, that brought Pichon Baron’s 2017 production down by 15%.

Pichon Baron’s winery is always an impressive sight but each visit seems to introduce new technological processes I had not come across before. Jean-Rene was racking the 2017 in preparation for the en-primeur campaign and sulphites bit the air and caught in your throat as you walk through the cellar.  Beyond the steamy haze I spotted a UV glow emanating from a barrel. In an attempt to reduce the sulphur additions during racking they are experimenting with using UV bulbs as an alternative. It turns out UV light can act similarly to SO2 in that exposure to the UV for about 10 minutes inside the barrel kills all microbial bacteria in the barrel. If it works efficiently enough it will have a drastic effect on the amount of SO2 used in the wines, particularly in Bordeaux where extensive ageing in barrel and regular racking currently requires extensive use of sulphur dioxide. At the moment the UV light technique is not efficient enough when carrying out a full racking (due to time constraints) but in the future, this technology could replace SO2 altogether. Further experiments at bottling are also under way using UV instead of SO2, which could really have a huge impact on wine production in the future.

Another technological innovation in the winery is a barrel that doesn’t require racking – further reducing exposure to oxygen further reducing the required use of sulphur dioxide. The large barrel attached to electronic sensors can provide accurate readings of the amount of oxidation or reduction (the opposite of oxidation) currently in the barrel at any one time. If reduction reaches a certain level it requires racking but only when it needs to, potentially replacing the regular racking carried out regardless of the condition of each individual barrel. Other experiments include the obligatory ceramic egg, testing the ageing potential of varying vessels from material to shape, size and longevity. Across the board the winery is a working laboratory.

During a vertical tasting of Pichon Baron over the last 4 vintages and comparing then to the 2011 the consistency in the winery is of great comfort to the innovations being made at the Estate. Pichon Baron are by no means the only ones with such technological impetus with many chateaux in Bordeaux and wineries further afield also embracing innovative practices and proactively incorporating new techniques through scientific experimentation.  But this is technology that rather than reducing the effects of terroir is helping to preserve it. 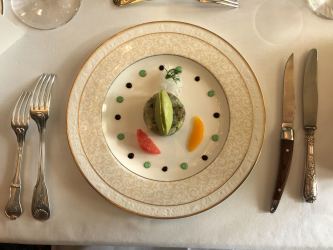