Earlier this month F+R were fortunate enough to be invited to a very special lunch with Christopher Jackson, the son of the late Jess Jackson, who heads up and manages their home estate of Stonestreet Vineyards in Sonoma County. Whilst the wines might not be as well known as the Jackson Family’s flagship Sonoma wines of Verité. The Stonestreet vineyards are in fact the family’s original property where much of the Verité wines originate from and is the family home where Chris and his brothers and sisters were brought up. One of their top vineyards is in fact named after him – “Christopher’s Vineyard”. These wines have therefore a very personal relationship to the Jackson family and they believe are some of the finest wines produced in their portfolio. Whilst Verité has stolen the limelight since its inception in 1998, the Stonestreet wines in recent years are now vying for attention as some of the finest wines in the collection. Anyone discovering the wonderful array Sonoma has to offer at the top end, these wines should be firmly on your radar.

According to the Wine Advocate’s Lisa Perrotti-Brown there has been a sharp upswing in quality at Stonestreet over the last few years, under the influence of winemaker Lisa Valtenberg and the winery’s decision to reduce the amount of new oak in their élevage, producing wines that better express the rich and varied diversity of the Sonoma region. Antonio Galloni from Vinous has also noted the increase in quality and the better balance of the wines in more recent vintages with both Vinous and The Wine Advocate awarding the latest releases some seriously impressive scores. Their single vineyard “Christopher’s Vineyard” scored 96+ points with their 2015 vintage due to be released in the next few weeks.

Speaking with Chris he said that Sonoma wine regions are largely misunderstood largely because the region is so big and therefore widely varied in climate as well as quality. Secondly the region has plenty of variations to play with in terms of both typography, micro-climates and the intricate variety of soil profiles making for one of the most versatile regions in the US. The Pacific Ocean also has a huge effect, regulating the temperature every day and providing a strong breeze in the vineyards making Sonoma distinctly cooler than neighbouring Napa Valley. Equally, the steep slopes in Sonoma (some at a 35% gradient) play a key role in the distinct terroir of Sonoma.

The Stonestreet vineyards are situated in the Alexander Valley AVA and the single vineyards are small pockets dotted around the Mayacamas mountain range ranging from 120 to 730 metres in altitude. Back as early as 2010 Robert Parker congratulated the winery for “exploiting this high elevation terroir. This has been a work-in-progress for Jackson, and he has finally hit paydirt … Readers need to pay close attention as there are some amazing Chardonnays as well as red wines emerging from Stonestreet.” Since then, the wines have only got better with the latest releases achieving some of the highest scores in the property’s history.

One of the top single vineyard Chardonnays in the Stonestreet portfolio is the Upper Barn vineyard planted in 1982. The vines are planted at an altitude of 550 metres on pure gravel/ volcanic soils and produce just 1.5 tons of grapes per hectare. The vines at this altitude sit above the fog line and benefit from both the sun intensity and the distinct diurnal shift at this altitude. Christopher compares the Upper Barn Chardonnay to the New York city skyline, a wine full of extremes. High levels of fruit ripeness, high level of acid with wines coming in at just 3.2pH as well as a distinct high level of skin to sun interaction producing distinctive high intensity fruit tones. The extreme combination of California sunshine, the high altitude, the counterpoint cooling influence from the Pacific, the sparsity of soil at this altitude, Christopher believes when combined shows off a wine that is in balance, as in all the extremes are in balance together.

Christopher’s Vineyard is a more north facing vineyard at 730 metres elevation grown on red volcanic soils with additional slate and iron. Robert Parker wrote up a stunning review of the latest review and a 50+ year ageing window! What is interesting about is this vineyard is that it has the longest ripening season in the portfolio due to high sun intensity due to the vineyards being above the fog line causes early budburst but the high altitude slows down the ripening as well as retaining the acidity. The result in the 2013 we tasted is spectacular. Lovely savoury sage, wild grass aromatics and tremendous acidity giving a beautiful persistence and freshness to the distinct California purity of fruit.

Look out for the latest 2015 release in the next few weeks. If interested in an allocation please get in touch with your account manager. 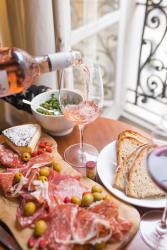