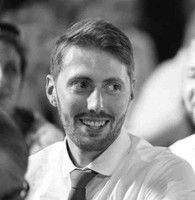 Closed Japanese whisky distillery Karuizawa is a phenomenon. For its entire operational life, it was barely known inside of Japan, let alone internationally. Yet today, its whiskies are recognised globally as amongst the finest and most age-worthy ever bottled and today is one of the most sought-after labels in the burgeoning rare whisky investment market.

Bottles of Karuizawa continue to break all the records. Just last month a bottle of Karuizawa 52YO (1960) Cask #5627 became the most expensive Japanese whisky ever sold at auction, a single 70cl bottle selling for £366,000. So, what is it that drives the demand and what qualities do bottles of Karuizawa possess which others don’t?

Like most whisky distilleries, its origins are humble, and the astonishing demand is relatively new, closely paralleling the upward trajectory of the rare whisky market over the past ten years.

By Scottish whisky distillery standards, Karuizawa had a short lifespan. Established in 1955 it was operational for only 46 years before being closed in 2001, a consequence of an economic slump domestically which impacted an industry with limited exports at the time. Although now synonymous with single malts, the first spirit to leave the still in 1956 was destined for blending and this continued until a switch in focus and the release of its first single malt in 1976. At the time Karuizawa was said to be Japan’s smallest distillery and so the relatively short years it was active, coupled with a relatively low capacity to produce single malt, led to an always limited amount of whisky on the market. Moreover, after lying dormant for well over a decade, Karuizawa was eventually demolished in 2016 by its then owners Kirin Brewing Co, dashing any hopes of a revival.

Fitting for such an extraordinary distillery was its extraordinary location on the southern slopes of one of Japan’s most active (category A) volcanoes – Mount Asama. Named after the town in which it was based, Karuizawa is under two hours by train north west of Tokyo and at the time of writing is the only town to have hosted both summer and winter Olympic Games events. The cold snowy winters, summers with up to 80% humidity and cool average annual temperature of eight degrees, creates specific atmospheric conditions ideal for whisky maturation. These conditions have been credited with creating the unique characteristics of Karuizawa single malt – the ability to age gracefully for many decades, whist retaining an abnormally high alcoholic strength and concentrated complex flavour. In terms of raw materials, it is rumoured that The Macallan may have been the inspiration. It is certain that they sourced the same grain and wood having imported Golden Promise barley from Britain and Sherry casks from Spain.

Had it not been for the formation of specialist Japanese whisky distributor Number One Drinks Co. in 2006, it is quite possible Karuizawa would have never entered whisky enthusiasts’ consciousness on the scale it has today. Founded by Marcin Miller and David Croll, it was after a cask sampling session in 2009 and after learning production had ceased, that they bid to purchase the distillery. The bid was rejected but a counter bid to purchase the inventory was accepted after protracted negotiations making Number One Drinks Co both owner and distributor of Karuizawa whisky.

Export markets beckoned and soon London based retailer The Whisky Exchange and Parisian based retailer La Maison Du Whisky would be blown away by what was presented to them and began bottling casks for an initially sceptical European market. Quality cannot be ignored however and a joint bottling in 2009 by the aforementioned retailers was compared with some legendary Scotch whisky bottlings when reviewed by respected whisky blogger Serge Valentin describing the Karuizawa 42YO (1967) Cask #6426 as “a Japanese masterpiece… once again, this baby reminds me of some old Springbanks. Say of the best sherried ‘Local Barleys’, if that rings a bell to you.” 95 points.

Karuizawa-mania ensued, fuelled also by the success Japanese whisky was experiencing as a category on the international stage, most notably Hibiki and Yamazaki scooping numerous ‘World’s Best’ awards and receiving critical acclaim including the famous Jim Murray Whisky Bible award for Yamazaki Sherry Cask 2013 Edition, reported in the mainstream media as ‘Japan beats Scotland’. The finite supply, increasing demand and sheer quality of the whisky meant Number One Drinks Co had an increasingly valuable commodity. Ever the purist , Marcin is reported to have soon tired of the spiralling secondary market prices and decided to sell off what remained of the reported 364 casks they originally owned and went on to found Japan’s first ever gin distillery (Kyoto Distillery) trailblazing within a new category with Ki-No-Bi gin.

You’d be forgiven for being a little underwhelmed by the presentation of some early releases of Karuizawa. A case in point is the previously mentioned Karuizawa 42YO (1967) Cask #6426, which at the time was the oldest Japanese whisky. Now retailing for £20,000 inc VAT, it consists of little more than a glass bottle, white sticker label and thin cardboard box. At the time of release however there was no precedent for the returns Karuizawa would achieve on the secondary market and at a release price of £250, considered expensive at the time, most were indeed opened and drunk.

Today, the most high-profile releases of Karuizawa are collected and displayed like works of art. The Karuizawa Pearl Geisha’s by Elixir Distillers are a stunning example of how the presentation can entice collectors and send secondary markets into a frenzy. They were a 2019 release exclusive to FINE+RARE and consisted of just 71 bottles of a 37YO Karuizawa and 172 bottles of a 38YO. When these two bottles are placed side by side, the labels form a mirrored image of a Geisha visually as impressive as the whisky itself.  These were the fourth release in the series so not only were collectors desperate to get their hands on these two but also the previous editions and any future ones. 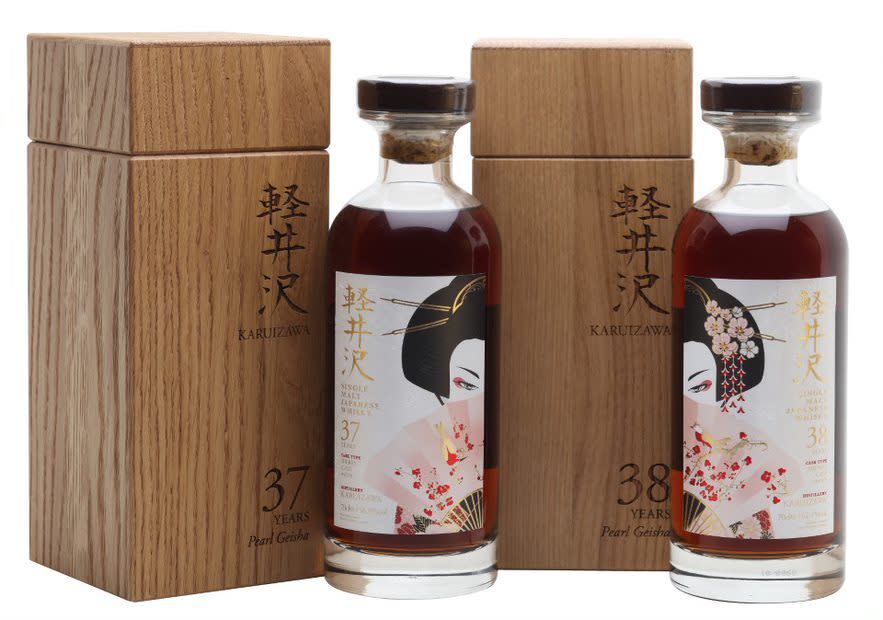 No one knows exactly how many ‘new’ Karuizawa releases there will be. The remaining casks Number One Drinks sold are said to have gone to three buyers who control the market and have been releasing intermittently since. What we can be sure of is there is very little left to be bottled and we are witnessing the final years of releases after which the number of bottles in the market will only decrease year on year. The story of Karuizawa is already legendary and it is one which cannot be repeated. For future generations of whisky enthusiasts all that will be left is the ever-decreasing supply and the chapter of Karuizawa in the history of Japanese whisky. In addition to the final releases however, there will be whisky for future generations which is intrinsically linked to Karuizawa. Although the distillery site was completely demolished, the pot stills which created the unique ‘new make’ were rescued and are already producing spirit which is being laid down at Shizuoka Distillery. There was also one final run in the old distillery site in 2006 by Ichiro Akuto of Chichibu distillery fame. A 2006 distilled Karuizawa crafted by Ichiro Akuto is something that we hope to one day see.

We have a limited amount of Karuizawa currently available – the 35YO ‘Noh’ (Cask #6183) and the Battle of Kawanakajima 35YO. If interested, please speak directly with your account manager or click here. 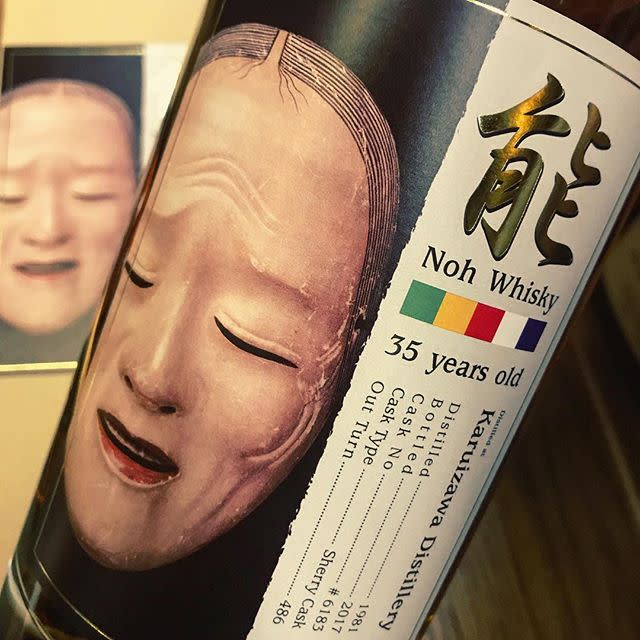 Some of the most recognisable Karuizawa labels are from the Noh series. First introduced in 2008, each release has a different label featuring a mask from the traditional Japanese puppet theatre Noh. Bottled by Number One Drinks, what is particularly rare about Karuizawa 35YO ‘Noh’ Cask 6183, is it was purchased by a private collector and bottled for him in 2017. Distilled in 1981, this is also what some consider a golden period for Karuizawa because of the quality of early 1980’s bottlings. 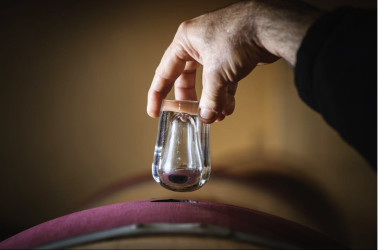