Q. Can you outline your approach to a wine when reviewing it?

Tasting wine for reviews can be considered a two-part process. The first part is linked to natural ability: Your ability to detect aroma and flavor compounds using your nose and tongue. The second part of the process is equally important to natural ability when assessing a wine’s quality: Memory recall. This is the ability to compare a wine that is being tasted to a mental library of many, many, many other wines of its peer group. For this, the taster must have accrued a significant mental wine library by tasting thousands of wines, usually over a period of many years. You certainly don’t need acute memory recall and a significant mental wine library to enjoy wine, but you do need these if you are a professional reviewer because they allow a critic to pin-point where a wine sits qualitatively compared to its peers as well as how it compares stylistically to other similar wines. Describing a wine to a consumer in the briefest possible way is a skill that can be learned and, I like to think, something of an art – especially when you are describing a wine that evokes an emotional experience. There are basic style factors to point out such as color, sweetness, acidity, weight/body, tannins, etc. The reviewer needs to swiftly hone-in on the major aroma and flavor compounds to pull out as descriptors. And, especially for the truly great wines, I think it is important to capture such aspects as the wine’s unique signature, personality and the emotional response it can evoke.

It depends. If the notes are based on tastings that are years apart, then the notes can be very different because the wine may have changed dramatically. If the wine was originally tasted as a barrel sample, all sorts of unanticipated changes could have occurred during the maturation of the wine prior to bottling. But, barring such circumstances as these and any bottle variation, a critic certainly needs to taste with consistency. So, the descriptions of the same wine tasted twice within a brief time frame should be similar, as should the scores. If, however, you are considering the notes of two different “critics”, well then of course these can vary widely and often do. Sometimes this has to do with the level of professionalism of one of the critics. Anyone can call themselves a wine critic, but ultimately what validates a critic is the level of trust that is built between the critic and her/his readers.

Q. How do you decide what wines to review?

All our reviewers have to walk a fine line when it comes to choosing what to review. Last year, our team tasted nearly 30,000 wines and we’re hoping to get that number up to 40,000 new reviews per annum within the next couple of years. That’s far more than any other professional wine review publication out there. But, even though we are the most comprehensive publication, we can’t taste everything. Therefore, we have to focus mainly on benchmarks, wines that are widely available in major wine markets around the world and exciting new discoveries. I make a point of trying to taste as widely and broadly as possible, so that hopefully no great wines fall through the cracks.

Q. You talk about cronyism being prevalent earlier on in your career, is this still the case?

It is not as prevalent as it used to be, but it still exists.

Q. Do gender stereotypes and prejudices still persist? How can the trade combat this?

Gender stereotypes and prejudices do not exist everywhere and in every work environment around the wine world, but if you consider us as a global industry, we still have a problem. We inch closer and closer towards “equality” every day, but some employers have a lot further to go than others. The trade can help to combat this problem simply by recognizing it – in all its guises. As basic as it sounds, just accepting our shortcomings goes a long way towards fixing them. Thing is, where the issue is most prevalent is usually where denial is fiercest. I don’t think putting women on a “Women in Wine” pedestal is the answer either. Stuff all that give-the-ladies-their-awards rubbish. We should never allow ourselves to be marginalized. Women, regardless of where they are or what they’re doing, should be able to compete on a level playing field with men – same rights, same opportunities, same access, same pay for the same job. If they don’t have these, there’s a problem.

Q. I have often wondered why the world of critics is mainly male dominated, do you feel you had to work harder to make a name for yourself and have you encountered any difficulties in the industry because of your gender?

I’ve been fortunate with my positions in the wine trade, greatly aided by my tenacity and very thick skin. I don’t think I’ve had to work harder than anyone though – harder than who? We all have to work hard to get ahead. I have never felt I was entitled to any position or achievement. This all said, I like to think I can quickly recognize the difference between a fair, respectful employer and one that clearly has gender issues. And again, I’ve been lucky because I have never been so desperate for a job that I had to work for the latter sort.

Q. Where in the wine regions of the world do you find most excitement / innovation?

Honestly, everywhere. We live in exciting wine times! Perhaps it is because I live here now, but I can’t help but be impressed with the incredible range and caliber of wines (at all price points) being produced in the USA’s Pacific Northwest: California, Oregon and Washington State.

Q. Where do you think you find the best value in the world of wine these days?

Australia – a whole continent of grapes, terroirs and styles and so much value for money to be had.

Q. Which wine makers do you most admire? Why?

Without naming any names, I’m drawn to the incredible rollercoaster stories of the one-man/woman-band winemaker. I have the deepest respect for winemakers who consider tending the vines as part of their jobs. The more I taste, the more I realize that the greatest wines in the world are the product of an intimate relationship between a winemaker and his/her vines.

Q. When are you at your happiest?

Q. What is your greatest wine experience?

The more, great wines I taste, the less I value any one experience.

Q. Who has been your biggest influence?

My mom, first and foremost, and then Ripley from Aliens.

Q. Where is your favourite place to eat?

Q. Which restaurant do you think has the best wine list?

There are so many restaurants with outstanding wine lists in the world, but the one that immediately popped into my head is a little off-the-beaten-trail hotel and restaurant in McLaren Vale, Australia, called the Victory Hotel. Although you do not have to spend an arm and a leg to get a good bottle of wine, there is an incredible selection of fine wines at very reasonable markups. As you can imagine, the Aussie wine selection is to die for especially if, like me, you are a huge Wendouree fan. Their Burgundy selection, in particular, is pretty awesome too.

Q. Where is your favorite place to travel, both for work and pleasure?

For work, it is too hard to commit to any one destination. I adore going back to Asia, especially Tokyo, Singapore, Hong Kong and Bangkok. In Europe, I love France (literally, anywhere in France), London, Cornwall, Tuscany (are there any bad places in Tuscany?), Barcelona and Seville. Australia and New Zealand will always be very special places for me. But for pleasure, I love rediscovering my home country: the USA. After living abroad in the UK, Japan and Singapore for 25 years, I’ve been living in Napa for three years now and couldn’t be happier. When we need to escape, we head to Lake Tahoe with the kids and the dogs.

Q. What so far has been the hardest part of the job as editor in chief of  the Wine Advocate?

A single mother doing piece work in a shoe factory making barely enough money to feed her children is hard. What I do is not hard. No matter how hectic or stressful the juggle of this job gets, I remind myself of this, and I am grateful that I have been given this incredible opportunity to do what I love and make a living out of it.

Q. What is the typical day at the Wine Advocate? 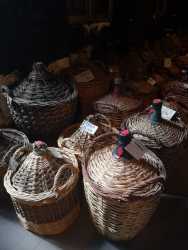