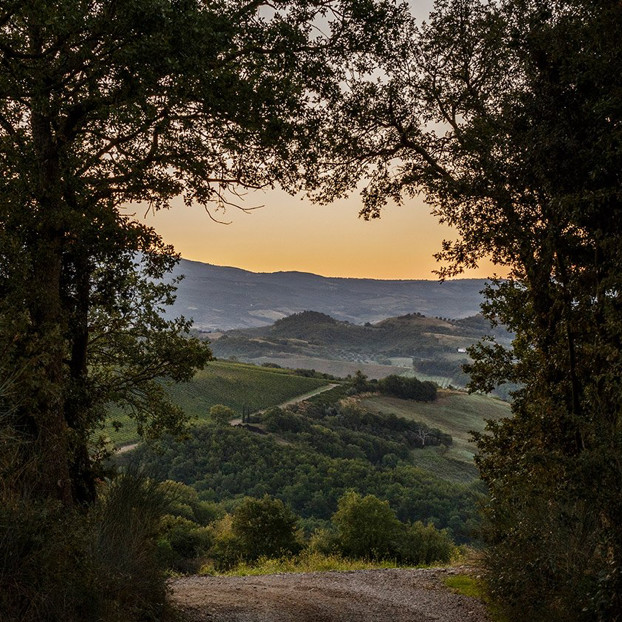 There are few names in Brunello Di Montalcino that rank higher than Poggio Di Sotto. The estate's incredibly elegant style, its obsession with quality and its signature style of gentle extraction, light colour and long ageing in specially designed oval Slavonian barrels, has garnered a loyal fan base producing consistently awe inspiring wines every year.

One of our most memorable trips through Tuscany last week was our visit to Poggio Di Sotto where we were looked after by the enchanting Federico Staderini, the chief consultant at the property and former apprentice to the great Giulio Gambelli. 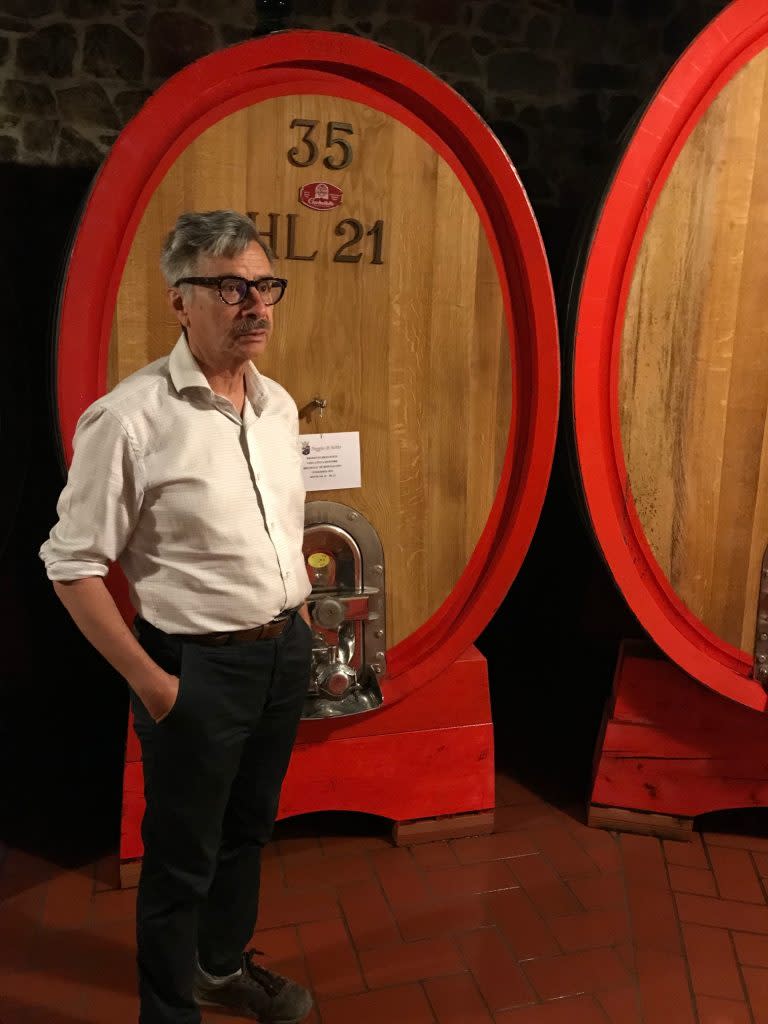 He is a man so attuned to his art that everything he says is a nugget of great wisdom and importance. Just the precision of his language extols the philosophy of the Poggio di Sotto Estate. Precision is what it is all about. Everything from the planting of their clonal nursery, to their high density massale selection vineyards to their bespoke elevage processes is governed by precision.

The estate was established in 1989 by Piero Palmucci and very quickly became one of the cult wines of Montalcino. Palmucci wanted to push the boundaries of the appellation, first by finding the perfect site – they decided on Castelnuovo dell’Abate situated on the warmer southern slopes of Montalcino facing the giant Mount Amiata, which creates big diurnal shifts at night retaining great freshness despite the heat generated on the site during the day. Palmucci brought in the Tuscan legend Gambelli, one of Italy’s most respected winemakers whose death in 2012 was a huge loss for the region.

Undeterred by the trends taking place in the region during the nineties and early 2000s, Palmucci and Gambelli were clear in their philosophy. Once the fermentation is finished, the wine should be left to develop and moved as little as possible, preserving the delicate and complex aromas that can easily be lost through excessive racking. The danger of leaving the wines for so long undisturbed means the wine can become dangerously reductive. The lees in the barrel start to mark the wine and the protective benefits give way to a loss of delicate fruit aromatics. Therefore the two carried out many experiments to find the perfect barrel which would allow the wines to mature and develop slowly without needing to rack the wines, while at the same time protecting the wine from becoming reductive. The conclusions found that a distinct oval barrel was the solution and the winery had them especially made by a Venetian cooper from Slavonian oak. 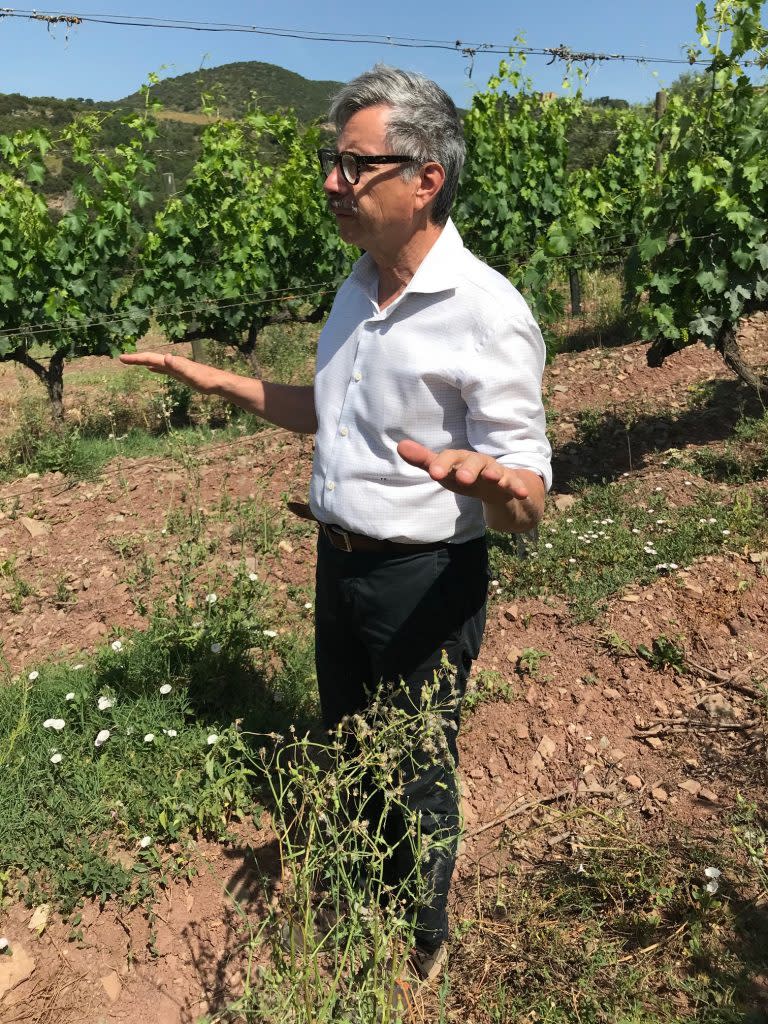 With no heir to take over from Palmucci, he sold his beloved estate to Claudio Tipa from the Collemasari estate, who on taking over the property kept the same loyal team of workers, including Gambelli until his death. These days it is his apprentice, Frederico Staderini, who overseas the winemaking at the estate. Since buying the estate, Collemassari have since bought up a further 30 hectares in the region. However, Federico explains that in the 11 years of expansion and acquisition of vineyards, the production of wines under the Poggio Di Sotto label has so far remained the same. Only a tiny proportion of the top quality parcels of the new vineyards have been incorporated into the wines, as and when older vines needed replanting. The remaining vineyards have yet to meet the required quality level to go into the Poggio di Sotto wines. True to the Poggio Di Sotto philosophy, much of the new vineyards are being replanted with a higher density, made up of the multiple clones of the Sangiovese Grosso varietal, that the property has gone to great lengths to cultivate since its inception in 1989.

Walking through the original vineyard, Perelle Nuova, with Federico, he picks the leaves off two neighbouring vines to show us the completely different shape of the leaves, showing the massale selection of varied clones that grow side by side in the vineyard. We are standing in the vineyard at 11am in the morning and already the vineyards feel like an oven. This south facing vineyard is one of the warmer sites in Montalcino and it was a site that Palmucci believed produced the highest quality wines of  Montalcino as the heat produced during the day was offset by the coolness of the night. As you look up from the vineyards you are faced with the huge ancient volcano of Mount Amiata which tempers the micro climate and the evening sees a significant drop in temperature retaining freshness and acidity in the grapes. Palmucci was so convinced of the uniqueness of the site he wanted the sub region of Castelnuovo dell’Abate to gain its own separate designation. Federico too is convinced of its qualities - for him it is this vineyard that gives the wines their "ecstatic" and "fantastical" qualities.

It is true when you taste the wines of Poggio di Sotto, despite coming from the warmest sites, they are some of the most elegant. bright, and moderately bodied wines in the whole region. Poggio Di Sotto tannins are about as fine as they come, fully ripe and beautifully integrated and for Federico it is the combination of these multiple clones, their unique location of these southern slopes, the high density planting and the very light touch and long maturation in these bespoke oval casks that create this beguiling example of Brunello.

Their Rosso Di Montalcino belies its appellation status and is only identified as such after two years ageing. At Poggio di Sotto they do not predetermine what will become a Rosso and what will become a Brunello and Riserva (if they decide to make one, so far they have only made 11 Riservas since 1989) as all the wine comes from the same vineyards. All the must and then wine is handled exactly the same and is aged in the same distinct oval barrels. It is only as the wine develops in these barrels over two years that certain barrels become separated either into Rosso to be bottled or to remain for a further 1-2 years to go on to become a Brunello or a Brunello Riserva. This makes Poggio Di Sotto’s Rosso Di Montalcino a pretty special cuvee in itself and has developed its own cult following among wine aficionados. On tasting the 2016 last week, we found that it captures everything that is so beautiful about Poggio di Sotto’s wines, but in an earlier drinking format. The wine has a beguiling aromatic complexity and incredibly elegant textured palate. It is a stunning wine and beautifully reflects the Poggio di Sotto style.