EditorialpeopleRoberto Voerzio - "Throw Away The Rulebook"

Roberto Voerzio - "Throw Away The Rulebook" 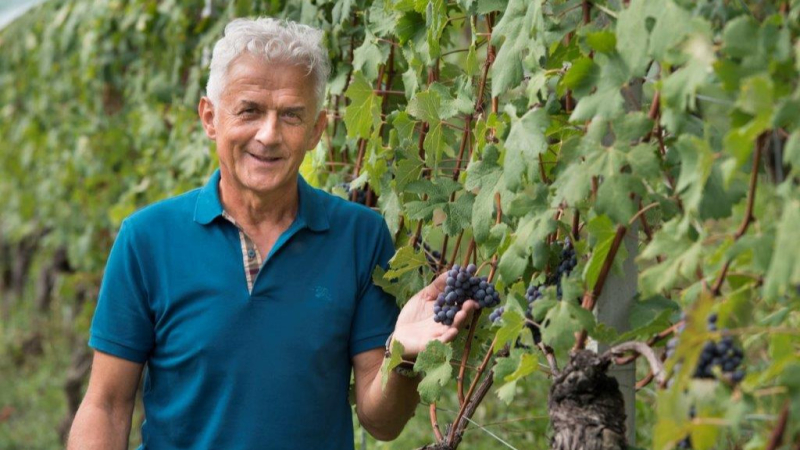 In the vineyard Roberto Voerzio harvests his grapes up to a month earlier than his neighbours! For Roberto, the autumn fog, cold weather and rain is to be avoided at all costs believing this results in a loss of power and fruit purity. In order to bring in the harvest a month earlier it is necessary for their grapes to ripen much quicker and this is achieved by lowering their yield to miniscule quantities as well as extending their leaf canopy to maximise photosynthesis in order to jump ahead of the growing season.

Their vines stand two metres high (twice the size of their neighbours). According to Cesare they have calculated they need one metre square of foliage to adequately ripen two kilos of fruit under normal growing times. By lowering their crop to just half a kilo and doubling their foliage canopy they can reach full maturity much quicker and bring in the harvest that much earlier, avoiding any bad weather which can often wreak havoc with harvests in Piedmont. This heightened level of photosynthesis also increases the acids and tannins in the grapes which is what Roberto is really after.

High density planting is also essential to the Voerzio philosophy, often planting his vineyards at double the density of traditional Barolo plantings. For Voerzio it is necessary to stress the vine, forcing the roots deeper into the soil, capturing the terroir sensitivities unique to each site as well as naturally reducing the yields of the vines due to each vine fighting for nutrients. This reduction in yield is just the beginning of an uncompromising approach to maximise concentration in the grapes. Not only does Voerzio carry out a green harvest, he then thins down every cluster a number of times throughout the growing season. As Roberto continues to perfect his art he is only further reducing his yields and shortening the ripening times. Twenty years ago each vine was producing one and a half kilos of grapes per vine, these days he has reduced it down to just half a kilo of grapes per vine!

The yields are staggeringly small. Even in his lesser cuvees, which have to be some of the best value wines on the market, he is still cropping his Barbera, Dolcetto and Langhe Nebbiolo at less than one kilo of grapes per vine. These extremes when brought together seem an incredibly risky operation and it is. Voerzio has invested heavily into hail nets to protect what little tiny clusters are left. With Voerzio selling his entire production in the first six months following release there is only pressure to produce more, yet Roberto’s radical approach has meant production per vine is getting smaller. His obsession for quality means anything that is not up to his standards is sold off and this means not all his cuvees are made every year. In 2002 due to the difficult weather he didn’t bottle a single wine!

Voerzio’s growing season amounts to a six month window of which three months are dedicated to growing the canopy and three months for the maturation of the grapes. As soon as veraison in the grapes starts, typically early July, Voerzio’s team are in the vineyard carrying out their first green harvest (two and a half months prior to the final picking date). They reduce every vine down to just five clusters opting to keep only the smallest clusters on the vine as these he believes are the most concentrated. This first green harvest takes them a whole month!

Fifteen days prior to harvest, typically at the end of August, they reduce the five clusters of grapes down to just two kilos by individually cutting the bottom half of every cluster of grapes. Roberto identifies that within the cluster itself the bottom half of the cluster contains the most water, the least amount of colour and the most aggressive tannins. This process Cesare (Roberto's right hand man) describes as treating the Nebbiolo varietal more like Pinot Noir. He explains Nebbiolo is a naturally large cluster varietal so by cutting it down to a smaller size (similar to that of a Pinot Noir cluster) and treating the wine closer to that varietal it forces Nebbiolo to become an earlier picked varietal quite at odds with how it is typically and traditionally grown.

According to Cesare, phenolic maturity is not a problem, if you reduce the crop low enough you can completely change the date in which the cluster reaches full maturity. At just half a kilo of grapes per vine the grapes are fully mature by mid-September. The same grapes at one kilo per vine will ripen two weeks later. At two kilos it will ripen six weeks later and at the appellations maximum yield limits (around four kilos per vine) will not adequately ripen until early November. The Piedmont weather typically means if you still have grapes on the vines going into October you will have to deal with fog, precipitation and potentially rain which all promote mold to develop. As Voerzio wants to only use natural indigenous yeasts for the fermentation it means he can’t use any anti-mold chemicals (he is also organic, so wouldn’t want to), this therefore is another reason why they want to shorten the ripening time and bring the harvest in before the weather turns.

Roberto has 30 hectares of vineyards which he has almost entirely replanted over the last 30 years adding additional vines in between the older ones, doubling the vine density typical of the region. It means he now has the equivalent of 70 hectares of vines planted in just 30. The statistics speak for themselves. With this number of vines he has the potential to produce 400,000 bottles a year but in reality, in a good vintage, production is closer to just 70,000 bottles and in 2014 it was down to just 27,000 bottles in which only 7,000 bottles were Barolo DOCG, the rest being Dolcetto, Barbera and declassified Nebbiolo. He has 14 hectares of Barolo Cru vineyards of which 12 hectares are currently planted in this high-density planting of 8/9000 vines per hectare, with the replanting to high density of the last 2 hectares set to follow in the next few years.

His commitment to quality is supported by the critics. Many people say you should always judge a winemaker’s talents by a difficult vintage and in 2014 (a vintage plagued by cool wet weather) Voerzio outscored practically every vigneron in Barolo. Whilst his approach still perplexes many of his fellow vignerons, the results he produces are undeniable.

The winemaking approach is arguably not quite as radical as the viticulture but far from the traditional practices of the region. Their attention to detail however remains as vigilant in the winery as in the vineyard. They opt for a quick, warm ferment and maceration, quite at odds with the typical winemaking of Barolo where a long maceration is the norm. Roberto prefers to keep it quick to protect the wine from any impurities. Following a settling period and racking from tank, the wines are moved in March to oak barrels of various sizes but typically smaller barrels than is traditional for the region. These days most cuvees see 30% of new oak barrels but they continue to taste the cuvees and weigh up what they think is the right amount depending on the vintage. The Torriglione cuvee for example is a very small, very old vineyard which is aged in 100% new oak because the production is so low. Once in barrel the wines reman there for two years prior to bottling. 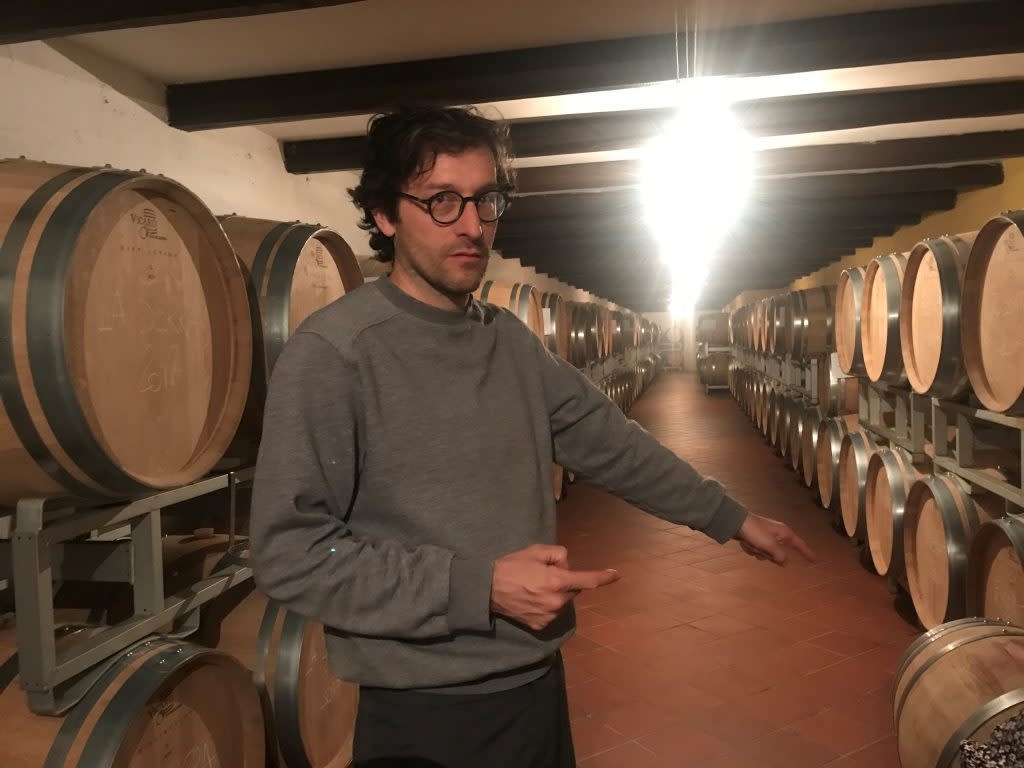 Voerzio ages the wines for two years in barrel

How the Wines Develop with Age

The team want to produce a wine that is very clean and heavily protected from oxidation. At the same time they want to air on the side of caution when it comes to reduction, racking the wines anything between 2 to 5 times a year depending on how the wine develops. Roberto carries out a very technical SO2 program with the idea that their wines will age in bottle and last 20 – 30 years. It is vital for them therefore to make sure there is no volatile or oxidative aromas in the wine at bottling which could potentially further develop with age and mask the fruit purity. He also uses very large corks in order to control and limit the passage of oxygen through the ageing process.

Within 18 months he believes the So2 levels reach 0 and the wine starts to evolve slowly in bottle. This process means the wines certainly go through a shut down period in its first few years in bottle, but once the wines shakes off their protective shell and take on some tertiary notes they become absolutely beguiling. What is more, the tertiary development remains incredibly pure and pretty – retaining all the floral perfumed complexity the Nebbiolo varietal is capable of. The precision of fruit and the nuances of Nebbiolo are quite extraordinary. With so little around it is a shame more people cannot experience these magical wines when fully mature. Tasting these wines at ten years maturity and beyond shows just how great these wines become, making all that hard work in the vineyard and sacrifice of yield totally worthwhile.

Gosset 1995 "Les Celebrissimes" - Behind the Bottle