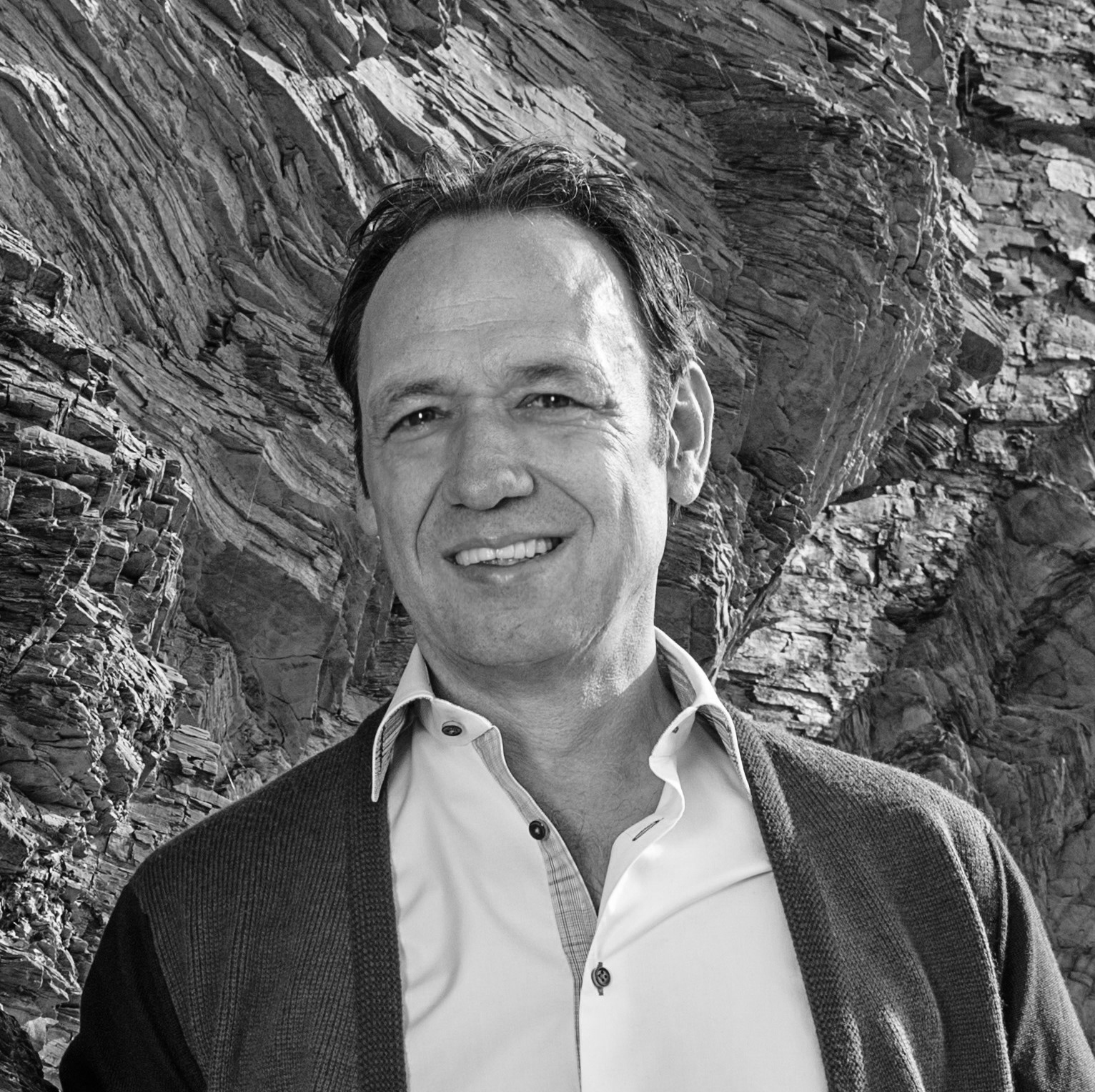 Markus Molitor shares the fascinating history of Mosel outlining the reasons behind the region's meteoric rise to glory at the end of the nineteenth century, its demise during the two World Wars and then its economic devastation in the 1980s.

Mosel and the Kingdom of Prussia

At the Congress of Vienna in 1815 the Mosel region was assigned to the kingdom of Prussia. Following this the region went through a period of great change. Initially the elimination of the domestic German customs borders brought a high competitive pressure on Mosel from other big wine growing areas (e.g. Pfalz, Baden, Württemberg) and prices decreased dramatically. In addition to this, bad weather conditions and the outbreak of new pests in the region, saw regular crop failures, leading to economic hardship for many winegrowers in the region.

Despite the initial deterioration of the region, the Prussian government saw Mosel as a wine region worth saving, deciding to invest heavily into the wine industry. During the 1850s the construction of the railway line along the river was completed providing a faster and easier access to the German Reich´s main traffic routes and therefore hugely improving the logistics of moving wine around the country and beyond. Additionally, government domaines were built for research purposes, further developing modern technologies that were being applied in the vineyard and wineries. The focus was set on the wine quality: winemakers should grow the Riesling grape variety, they should harvest late and be highly selective when picking the grapes to produce better quality, and the wines should be "natural“ (without any additives, without being chaptalized, etc.). In the 1880s several vintages were of outstanding quality, and the interest in Mosel Riesling grew around Europe. By the 1890s Mosel was enjoying a golden era in which it’s reputation for fine wine production saw a boom in sales throughout the 1890s. Furthermore the consumer´s understanding of taste changed from heavy red wines to light, refreshing whites, rich in aroma and acidity. The boom led to tourism, many people from all over Europe came to the valley, including famous artists such as William Turner and poets such as Johann Wolfgang von Goethe. Mosel Riesling was drunk by nearly all secular and ecclesiastical rulers of Europe – Berlin, St. Petersburg, London, etc. Kaiser Wilhelm II also visited the area several times. The wines were on the lists of all top restaurants around the world. Mosel was the world’s fine wine mecca. 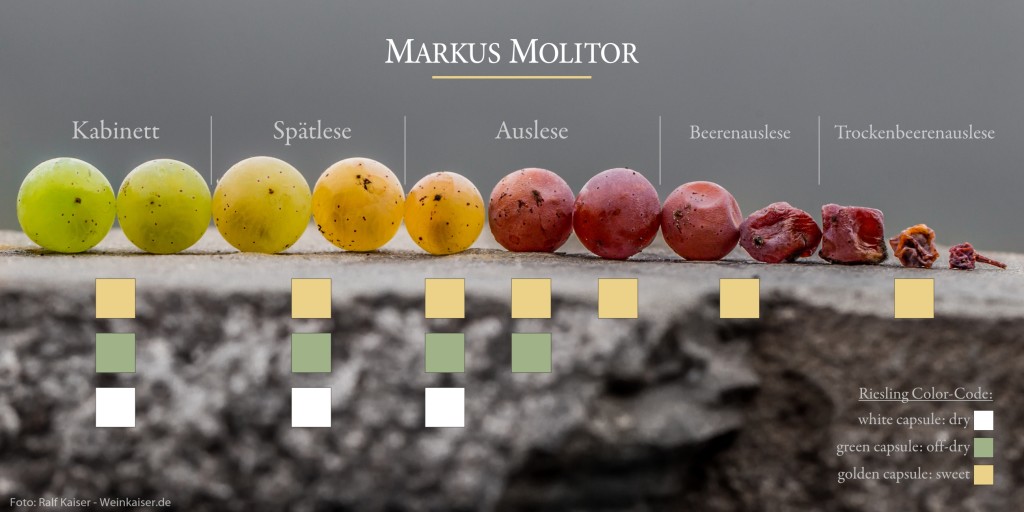 By the beginning of 20th century nearly all of the wines coming from the Mosel area were dry or maximum off-dry because there was no technical possibility to interrupt fermentation unnaturally. All of the Rieslings were fermented by natural yeasts only. They were kept in large "Fuder“-barrels – kept on their lees (sur lie – the dead yeast cells) for several months, sometimes even for more than a year, adding textural, aromatic and flavour complexity.

The style of our dry and off-dry wines could be compared to the wines from 100 years ago. All of our wines ferment naturally, in the spirit of authenticity, vineyard character, complexity and longevity. No fining agents, enzymes or other additives are ever used. Most of the wines remain on their yeasts ("sur lie“) for months, gaining in mellowness and body.

During that time, winemakers did not have the technical possibility to stop fermentation earlier with a higher proportion of residual sugar. The machine needed for this procedure, containing a special filter which stabilises the wines by pulling yeasts and other solids out, only came into commercial use in the 1960s. An invention that would turn the style of the region’s wines on its head and damage its reputation as one of the worlds leading fine wine regions. 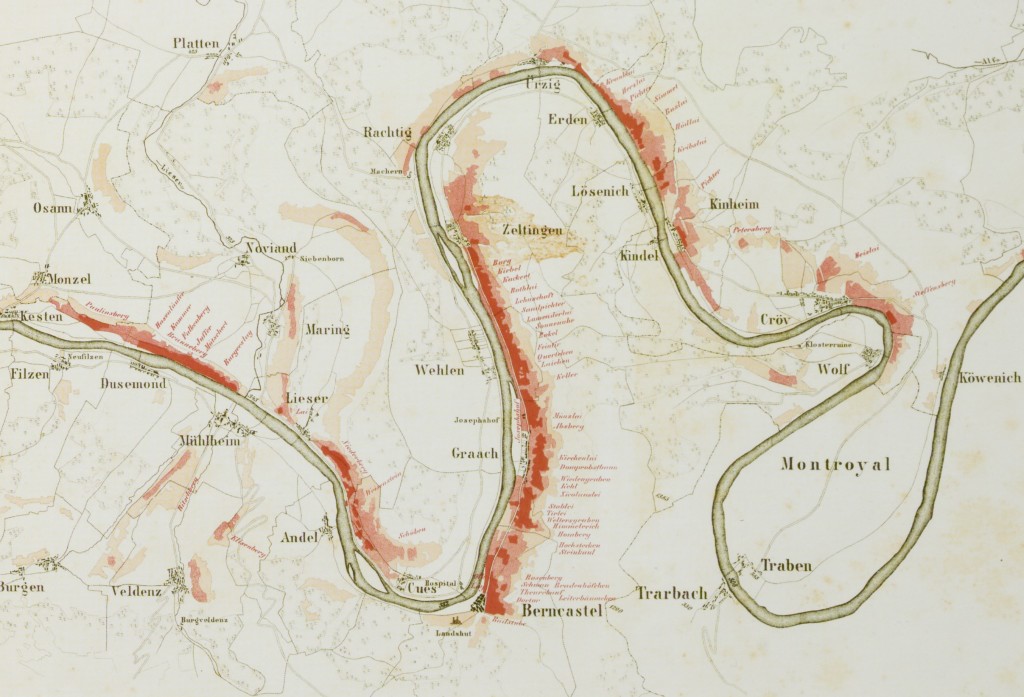 In 1868 the Prussian tax authorities published the first official wine terroir classification in the world. This classification was used to set tax rates – the higher the quality of the single vineyard was rated, the higher the tax rates for the winegrowers (the darker red coloured the plots on the map – see map). In addition, this map was an unprecedented tool for promoting wine by the Prussian government and proved a fantastically successful approach in identifying the nuances of each vineyard and was to be imitated by several other wine regions in Germany and beyond. Despite being 150 years ago, we think that this classification was very accurate in terms of identifying quality. The completely south-facing steep slopes are still the best to grow vines in our valley. Due to enlargements during 20th century some important vineyard sites are missing, in terms of our winery it would be Wehlener Klosterberg vineyard which has proven to belong to the red or even dark red coloured surfaces on the map. Due to climate change we think that several vineyard sites which are located in side valleys or on a higher altitude have actually improved over the last decades. Nowadays they would also belong to the higher or highest rated plots. But overall their assessment was petty accurate. 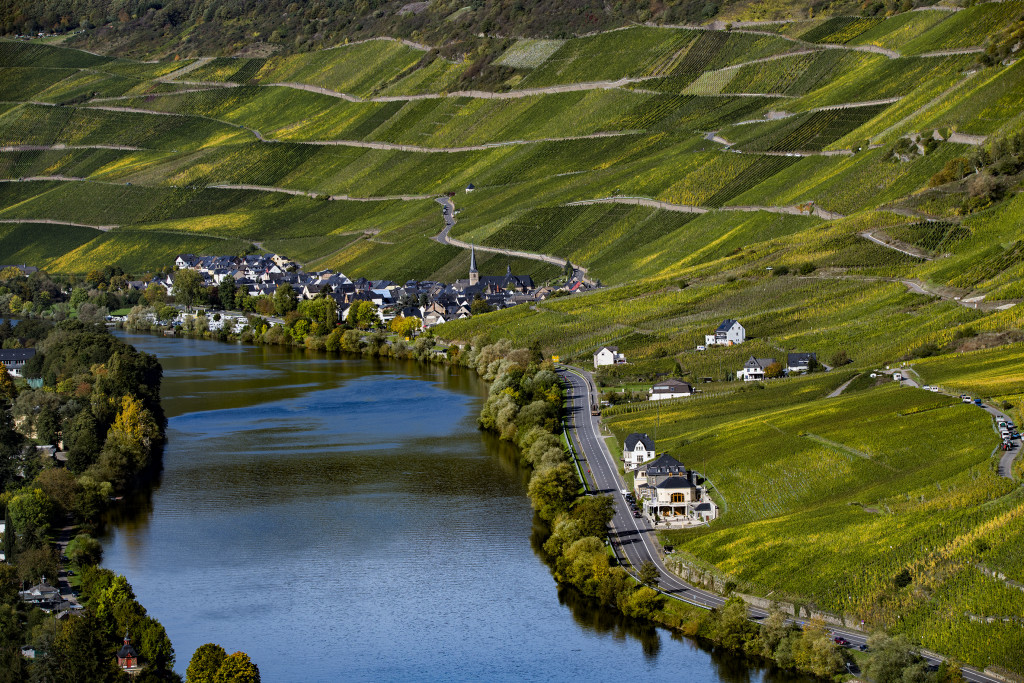 The village of Graacher and the Himmelreich vineyards home to Markus Molitor's Spatburgunder.

The World Wars were obviously going to have a devastating effect on the region situated on the border of France and Luxembourg and this brought an end to the golden era. Whilst Riesling was the most planted and popular variety, Pinot Noir was also grown very successfully in the region until it was banned by the Nazis in 1933.

The Nazis forbade the growing of French varieties and asked vignerons to focus on the prestigious "German“ Riesling in the Mosel wine-growing area which used to be the showpiece for them, being famous all over the world. The ban quite shockingly lasted until the end of the 1980s, therefore the tradition of red wine making was nearly completely lost in the region. I was one of the “pioneers“ in the area to cultivate Pinot Noir again by planting the first vines in 1987 in the south-facing steep slope called Graacher Himmelreich.

After WW II there was a huge request for fruity and light white wines and with the economic hardship that followed, a refocus towards quantity rather than quality. The Mosel Rieslings were swept up in this, predestined to produce high quantity, light, sweet wines. Winemakers all along the river enlarged their vineyard surface, not only in the steep slopes but above all in the flat lands on the other side of the river. Growing there was much easier and less time and work intense, and therefore also a lot cheaper. Mosel wines became famous as “sweet and cheap“ all over the world – markets were flooded. This concept based on quantity led to an enormous enlargement of vineyard area in the Mosel region from 7500 hectares to 12,300 hectares in the early 1990s. The glycol scandal (when antifreeze was discovered in bulk Austrian wine shipped to large German wineries in bulk and bottled under the German winery labels) only further enhanced the bad reputation of wines from our area.

Whilst nearly everything has changed over the last two decades the whole wine growing area still suffers from the “Black Towers“ and “Blue Nuns“ sweet and cheap German wines that despite a drop in popularity still are made in vast quantities and exported all over the world. It is our aim to help restore the wines of our valley to their former glory, therefore we focus uncompromisingly on quality in every step of our daily work. Luckily the understanding has changed – nearly all winemakers especially the young generation rely on the traditional ways of quality winemaking again and combine it with modern technology, new insights of research, as well as their passion for the famous steep slopes of our region. Wine lovers all over the world are recognising these changes as positive and we think we are back on the right track to regain the popularity and reputation garnered to the region during the golden era of the 1880s and 1890s. 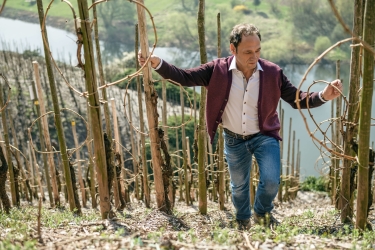