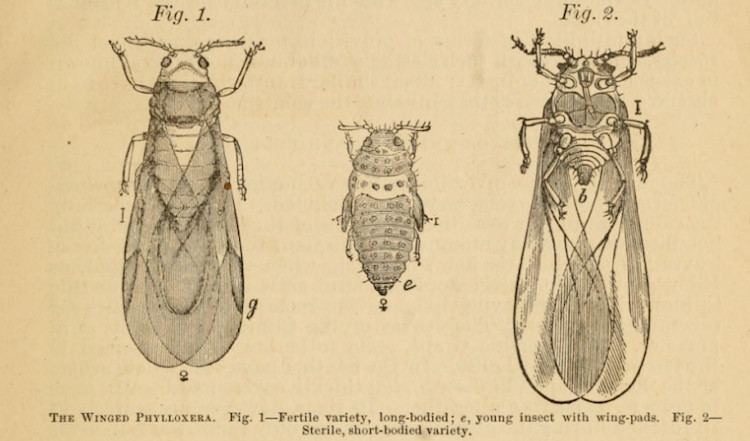 While medical researchers work furiously in search of a vaccine for COVID-19 in 2020, the response to the phylloxera pandemic in the mid 19th century was remarkably lackadaisical. Following the release of Bollinger’s latest vintage of Vieilles Vignes Françaises, a wine grown from vines planted on its own roots and thus vulnerable to attack by phylloxera, FINE+RARE talks to Denis Bunner, Bollinger’s Deputy Cellar Master about the Aÿ-based Champagne house's rarest wine, as well as delving into the archives to explore the history of the fatal vine louse.

It was a small yellow aphid that disregarded national borders, wiping out the livelihood of every grape grower in its way and there was no known cure nor effective prevention in its first devastating years. Even when a cure was discovered, growers were reluctant - and often financially unable – to use it. As a result, phylloxera vastatrix  – vastratix meaning ravager – continued to nibble on the roots of vines across western Europe, sucking the lifeblood from the vines and leaving wounds for any passing infection.  By 1900, 2.5 million hectares of France's vineyard had been uprooted, causing production to slump, encouraging dodgy dealers to make fake wine, and leading to mass protests.

The story of phylloxera in Europe started as a well-intentioned gift. In 1862, an American grape grower sent some cuttings of native vines to his friend in the Rhône Valley who planted them, unaware of the damage it would inflict on his compatriots. Within a year, local growers were lamenting their sick vines. Phylloxera had wanderlust, sparing no French region; nor did it respect the country's finest terroirs or illustrious châteaux.

However, a concerted national response to the potential ruin of the country's national beverage was not forthcoming. The French government was too busy putting on International Exhibitions in Paris (1867), opening the Suez Canal (1869) and waging war on Prussia (1870-71). In 1870, the government acknowledged there might be an issue, offering a 20,000 Franc reward for a cure. Remedies were offered including burying living toads in the vineyard, adding volcanic ash from Pompeii to the soil or inviting a marching band to play to the vines. Unsurprisingly, the vines continued to die. 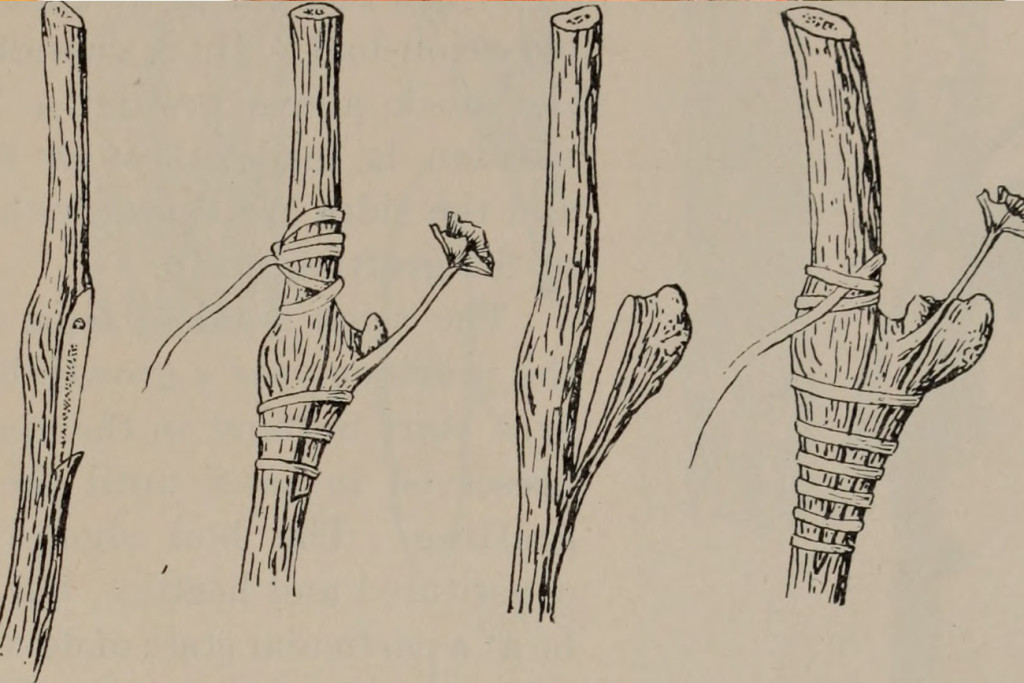 The solution: Grafting onto American rootstocks

In 1880, a solution was finally accepted: graft European varieties to the roots of American vines. However, grafting noble French varieties - vitis vinifera - to the roots of these lowly American varieties seemed like sacrilege to many growers. It was thought they would affect the nobility of their precious wines. There was also the issue of cost: uprooting your vineyard, replanting and then having to wait between three and five years for a crop did not feed a family and the concept of state aid was still a long way off.  As a result, many tried to limp on for as long as possible, injecting carbon bisulphide, an expensive and toxic solvent used to vulcanise rubber, into the soil to stave off the inevitable.

The producers in the south of France were the first to be hit in the 1860s and they replanted with high yielding hybrids. By the turn of the century, the Languedoc was producing more wine than ever before. However, the region's unscrupulous merchants made up for the initial shortfall at peak phylloxera by bulking out grape juice with sugar and water while others made wines from raisins. These practices continued despite the replanted vineyards returning to full production, causing a huge oversupply and depressing prices.  Urged on by a growing labour movement, hundreds of thousands of people took to the streets in 1907 to call for change. 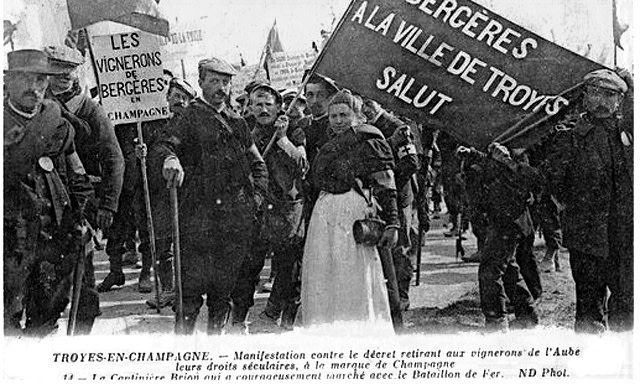 The Champagne Riots of 1911

The Champenois followed suit, rioting in the streets in 1911 and the root of their troubles also lay with phylloxera.  In 1892, the Marne was invaded by its first phylloxera aphid and, by 1910, 40% of the region had been affected. But this was no time for production to fall: Champagne sales were booming and to make up for the shortfall, dodgy merchants (and some of the seemingly reputable houses) brought in wines from the Loire and the south of France by the train-load. The wines were made sparkling in their cellars and the bottles emerged, as if by magic, as Champagne. Supply and demand economics suggested that the growers should have been earning more for their fruit as phylloxera affected supply and sales boomed, but fake Champagne kept prices low. Having borne the cost of replanting their vineyards, this was not how growers imagined they would be rewarded and protests ensued.

While most vineyards in Champagne and beyond are now planted on American rootstocks, there are some vines and vineyard owners that play wine roulette and grow vitis vinifera on their own roots. For example, three plots belonging to Bollinger were planted in 1960 in the traditional pre-phylloxera way. One has succumbed to the vine louse but the remaining two parcels are the source of Vieilles Vignes Françaises, a rare Pinot Noir-based champagne that provides a taste of a bygone era. 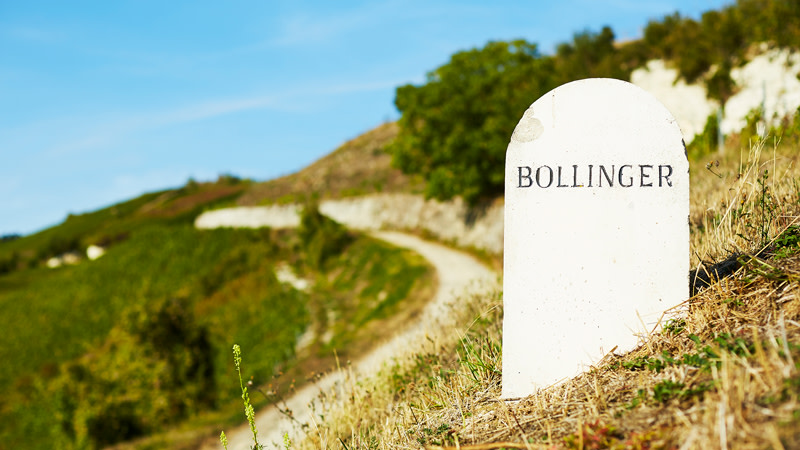 Denis Bunner, Bollinger’s Deputy Cellar Master talks to FINE+RARE about the Aÿ-based Champagne house's rarest wine, Vieilles Vignes Françaises, which is produced on its own roots.

Why did Bollinger begin producing Vieilles Vignes Françaises in 1969?

An English journalist Cyril Ray proposed the initiative to Madame Bollinger following a visit in 1967 and this inspired Madame Bollinger to create a wine from the precious vines to commemorate her 70th birthday, which saw the first bottle produced in 1969. The wine was launched in 1974.

Are the vines pre-phylloxera? If so, they must be more than a century old.

No, the current plots in Aÿ were planted in the 1960s but it is impossible to give an age to the vines due to the perpetual renewal and the way the root system grow [the system is called provignage, which is like vine fostering when there is an empty space to fill. Take a cane from one vine, train it down into the soil and partially bury it with the end sticking out until it forms a separate vine. This is also done in the Nacional vineyard at Quinta do Noval]. 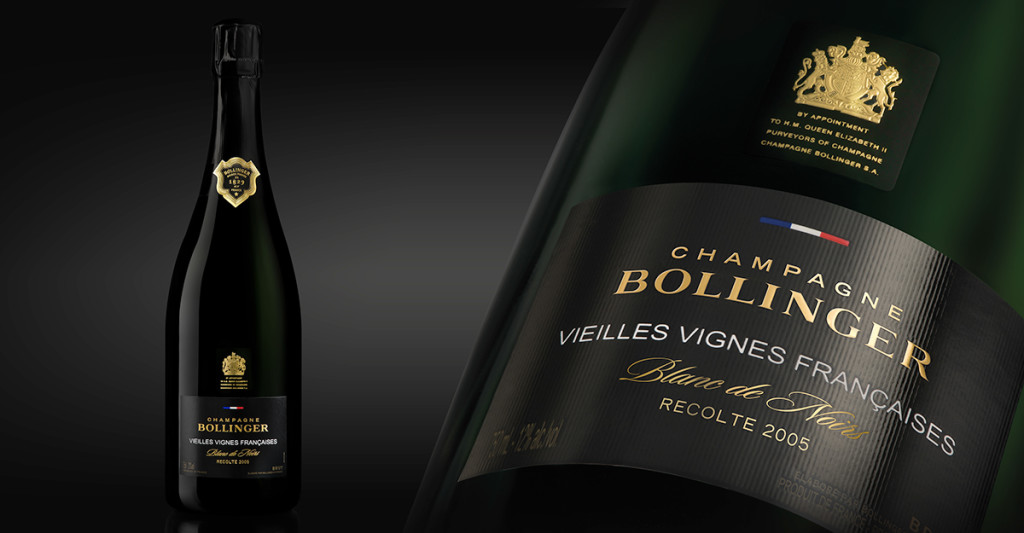 There were three plots that weren't grafted but there are now only two. What happened? third plot succumb to phylloxera?

The third plot in Croix Rouge de Bouzy was attacked by phylloxera at the end of the 1990s – the vineyard didn't have protective walls around it. The last vintage was 2004 as we had to uproot it when it fell prey to the infestation.

How many acres do the two remaining plots cover?

The Clos Saint-Jacques (Aÿ) covers just over half an acre while the Clos des Chaudes-Terres, which lies within the boundaries of Bollinger’s own lands, covers a little over a third of an acre. In total, they represent 0.36 hectares.

Is there anything special about the soil of these two plots that means it resists phylloxera?

The soil is not remarkably different from that in the rest of Aÿ and as per the rest of Champagne it features chalk.

Is this special cuvee made every year?

No. Only in in declared vintages.

What is the average production of VVF?

This varies by vintage, but falls within the range of 2,000 to 3,000 bottles. A total of 2,420 numbered bottles of the 2009 Vieilles Vignes Françaises vintage were produced.