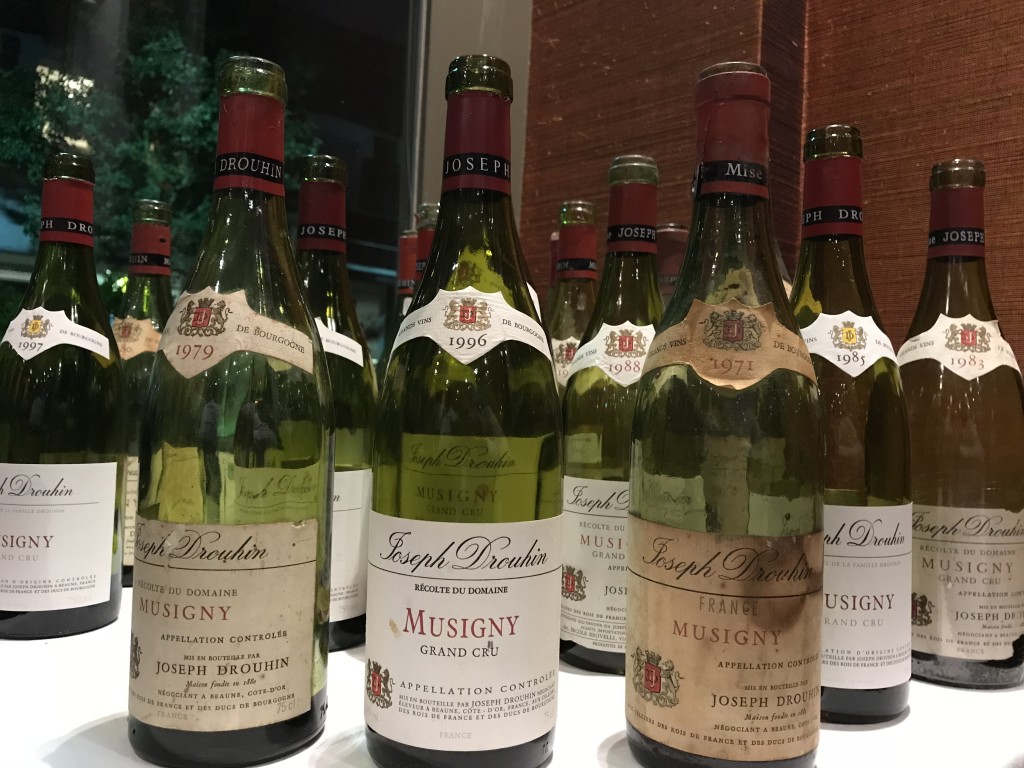 The Musigny Grand Cru is an historically important site in Burgundy with vineyards on the site dating back to Gallo-Roman times. It was singled out as a separate vineyard since the Middle Ages by the monks of Citeaux, yet unlike Clos Vougeot it remained un-walled due to the fact that the site remained in multiple ownership during the ancien regime (monarchic / aristocratic political system operating in France from the 15th to the 18th centuries). Geographically the site is unique in that the soil consists of a red clay not found anywhere else in the region along with chalk limestone base distinctly typical of the Chambolle sites. According to Veronique, this terroir has a unique effect on the canopy in the site, giving the leaves a different colour. The Musigny Grand Cru has more clay than the rest of the Chambolle sites adding particular body and roundness to Musigny over and above it the neighbouring Chambolle sites. Veronique states that the clay terroir has a unique ability to almost hide the underlying power in the wine, particularly when comparing to Bonnes Mares where the structure and tannins are more present and textured. It is also the only Grand Cru site in the Cote d’Or (other than Corton Charlemagne) that is allowed to grow white grapes as well as well as red and Comte George de Vogue still have a small plot of Chardonnay grown on the site. 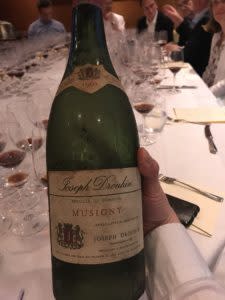 Domaine Drouhin’s plot on Musigny at 0.67 hectares might be dwarfed by the 7.12 hectares owned by Comte George de Vogue but they in fact hold the 4th largest holdings within the cru. It is said so often, it has become almost a cliché but Veronique Drouhin herself describes Musigny as the epitome of the “iron fist in the velvet glove” analogy. She adds that the taste profile is one of elegance, complexity and cashmere tannins which have a warming soft texture that help temper the surprising power in the palate despite the softness in texture.

Many of these wines Veronique herself had never tasted. Her father up until 1961 could not afford to keep any stock back and even beyond this many of the vintages brought tonight including the 1979 (one of the surprising highlights of the flight) has not been in the domains cellar stocks for many years.

The Drouhin’s acquisition of their plot of Musigny (0.67hectares) was a typically Burgundian affair. Initially their site was owned by “Mrs Adrian” a local singer who sang with the Djon Opera. She was the wife of Charles Mugnier (brother of Marcel Mugnier) and following Charles death in 1944 she inherited his vineyards. Charles Mugnier had attained an impressive collection of plots including parts of Bonnes Mares, Amoureuses and Musigny. Veronique’s grandfather started buying grapes from the vineyard from 1944 following the death of Charles Mugnier. Her father then continued to buy the grapes from Mrs Adrien up until 1961. Mrs Adrien retained an annuity payment for the land each year until she died. From 1961the Drouhin Estate acquired ownership and full control.

Drouhin’s plot of Musigny is situated in the northern part of the Grand Cru known as “Les Musigny”. The Grand Cru is split into 2 parts separated by a road, the eastern part consisting of all the Musigny growers whilst the western site “Les Petits Musigny” is a monopole owned by Comte George de Vogue. Drouhin’s plot is in good company with Leroy directly to its north, Mugnier to its south and the site of Les Amoureuses with Groffier to the West. 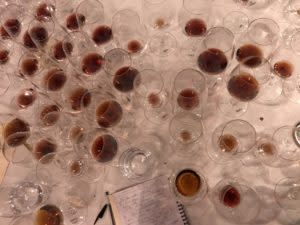 There were many highlights unsurprisingly throughout the night but of particular interest was the condition of the 1970s flight. The 70s was a difficult decade for Burgundy and the wines on recent tastings have not fared well but the 71, ’78 and ‘79 were real highlights of the night and the ’72, ’76 were also very impressive. It was a fabulous exploration of mature Burgundies in excellent condition and yet each still showing traits of their vintage – the ’76 being a warmer, riper vintage contrasted with the cooler yet profound ’78. Other highlights included the ’02, ’99, ’96, ’85, ’61.

Musigny 1999 –Much deeper colour than the ’02 and ’07. Very much into the second stage of development taking on more body with age and additional tertiary complexity alongside the black cherry fruit and raisin. High level of ripeness typical of the vintage, very juicy yet loads of acidity and fine tannins. Excellent and drinking beautifully now.

Musigny 1998 – The ’98 feels broader on the palate than the ’99, textually brilliant and packed full of earthy flavours and dried clove spice. Good glycerol fatness to the palate adds weight and breadth. Tremendous intensity and acidity and tannins give a terrific hold on the palate giving a great framework to the palate. Very savoury, very earthy. Excellent.

Musigny 1989 (from Magnum) – Slight taint on nose initially, that thankfully blows off. Bags of freshness and fruit.  Incredible energy, power and  intensity wrapped in silky tannin structure. It really tastes so much younger than it is (is this due to being in magnum?)Fine acidity gives backbone. Excellent.

Musigny 1985 – Wonderful nose of confected fruit (of the best kind) mixed with leather and dried herbs. Great framework to the wine despite its age, the palate is broad and beautifully structured holding everything together. Surge of acidity with fine glycerol integration. Tertiary, truffle flavours with additional camphor and dried wood. Better framework than a lot of others.

Musigny 1980 – Unusual aromas of marmite and maltloaf. Interesting rather than negative. Lacks the structure, depth and length of a top vintage.

Musigny 1978 – Another highlight of the evening. Lots of minerality on the nose–dried stone, herbs, spices – complex aromas. The minerality continues on the palate as the fruit flavours become more earthy / stony. Awesome breadth on the palate, great energy surge. Rich and ripe with fantastic acidity brilliantly integrated and framing the mineral fruit palate. Fully mature, starts to fade in the glass.

Musigny 1976 – Warmer vintage again shows on the palate with lots of ripe fruit but some prune  and raisin too. A lot of weight to the palate and a sweetness too. Too warm to retain freshness and lift.

Musigny 1972 – Combination of both raisined fruit but also lots of intensity from the acidity.

Musigny 1971 – Another highlight of the evening. Fantastic bouquet almost like Christmas cake, rich and concentrated but with additional minerality, dried stone. Warming in the mouth with great mineral lift as a counter-point to the ripeness. Excellent.

Musingy 1961 – On opening the wine had incredible freshness brimming with ripe fruit, nice glycerol sappiness and stony minerality with lots of earthy savoury truffle character on the finish. Fades in the glass.