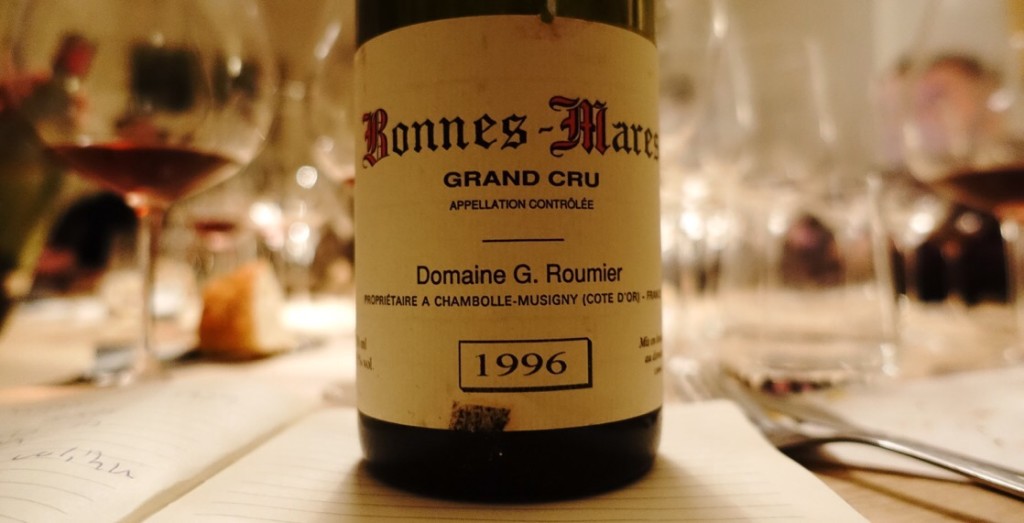 A very special thank you to Jordi Orriols-Gil for sourcing the incredible collection below and making this evening possible.

It is not often one sits down to a 30-wine vertical tasting over dinner. And when 27 out of those 30 wines are Domaine Georges Roumier Bonnes-Mares Grand Cru, dating from 2007 all the way back to 1945, it's hard not to find yourself in a dizzy state of disbelief. Not only that, but Christophe Roumier himself, the man at the helm of this legendary winery since 1992, is there breaking bread with us.

Talking with Christophe he admits he has never tasted so many of his own wines in one sitting, or had the opportunity to taste some of the rare, older vintages for many years. He is as giddy with excitement as everyone else. Even late into the night and 30 wines down, when talking about specific vintages he is laser sharp on the specifics of every vintage: why '77 is like this, and '97 like that. It is a fascinating trip down memory lane. By the end of the dinner, he is buzzing like the rest of us.

Revisiting some of the wines at the end of the night, we discuss the '77 and its condition. Loads of energy and acidity, silky glycerol viscosity on the palate but tainted by rot, he knows why it tastes the way it does. Whilst not his favourite, he still respects the vintage and the flavours it gives. We are tasting the effects of rot on a wine over 40 years old!

From the first sip of the 2007 Bonnes-Mares we knew we were in for an extraordinary journey through time. Pristine clarity of fruit (redcurrant, raspberry, cranberry) with that earthy whole-bunch minerality giving depth to the flavour profile. The tannins so fine they melt evenly over the broad palate, effortlessly filling the mouth - not really knowing where the energy surge starts and ends, with an incredible persistence on the finish. Jasper Morris declares Roumier made the best wine in the whole of Burgundy in 2007... and who am I to argue with that!

The 1997 is in a great place, aromatically open, exuding wonderful perfumed fragrance. Loads of primary red fruit - so fiery - bursting with energy and acidity, yet beautifully poised. This is earth and fire, the whole package.

The 1990 is an extraordinary wine. The perfumed nose goes right to the back of your throat. Texturally it is layer after layer of flavour. Reaching into its eighteenth year, the viscosity starts to show and the glycerol-edged film starts to coat the tongue, only adding to the persistence, giving the wine an added unctuousness. The density of fruit is testament to the vintage and still loads of primary cranberry and redcurrant fruit. On the finish, the wine explodes adding another dimension to the tasting experience. The phenomenal length is just a palate reminder that this is something special.

Roumier made two different cuvees of the Bonnes-Mares 1988: a straight Bonnes-Mares and a Bonnes-Mares Vieilles Vignes. The vineyards are also separated into two: with the higher vineyard's soil containing more limestone and the lower vineyard's composed more of clay. In Christophe’s mind it was always the combination of the two (Terres Blanc & Terres Rouge) that made the best Bonnes-Mares. With the '88 it was a rare opportunity to taste the Vieilles Vignes and the straight '88 against each other. For me the Vieilles Vignes was on another level - more intensity, more persistence. Texturally brilliant with an almost oily mouthfeel, but great savoury, earthy, fruit complexity. The straight '88 felt more muted in comparison.

The '85, my my the '85! This wine at 33 years old seems like a Peter Pan of a wine - alive, kicking and screaming "I am great!". Distinctly different on the nose from the other wines from the '80s served in the line-up, with a floral bouquet above and beyond the Pinot-esque perfume. A lifted quality awakens the palate, the tannins so fine and elegant and a phenomenal length. This wine is brilliantly pure and on incredible form.

The '70s options were the least enlightening of the flights, which was a shame particularly as I had heard so much about the ’71, but condition got the better of it on this occasion. The 1969 was back on-point. So many important things happened in France in ’69… could this be up there in importance? Probably not! But for a wine lover it is mind-blowing. This wine is so alive, so vibrant, so complete! Nothing more important perhaps than the last blind wine of the night...the 1945. It's incredible that the wine was even made, let alone that it outlives its makers. It is only eclipsed by the wine tasted blind along side it - the 1955. Both wines brought from the personal collection of Christophe Roumier himself.