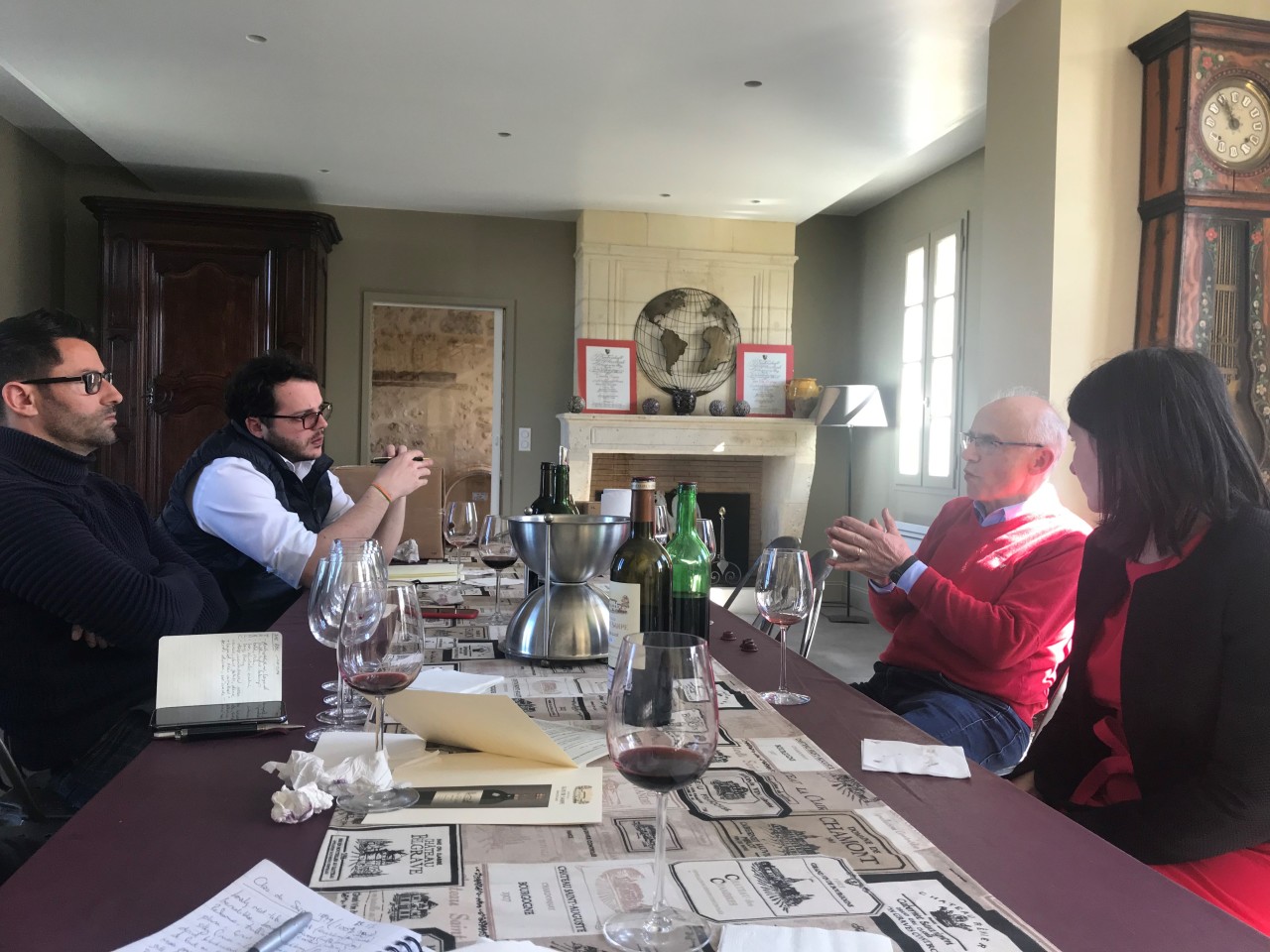 Clos de Sarpe is a rather unassuming place to visit, nestled in a little enclave north east of the village of Saint Emilion. It is in fact a tiny property in Bordeaux terms, made up of just 3.7 hectares and producing a maximum of 14,000 bottles a year, but more often than not, closer to just 10,000. In 2018 they made just 5500 bottles. The vineyards are made up of a single hilltop on the Sarpe plateau and it is this small plot of land that is unique compared to surrounding vineyards in the region thanks to the naturally low pH grown there.

Clos de Sarpe makes big, ripe, juicy wines, therefore their low pH is nothing to do with early picking. Commercial Director Maylis Marcenat insists it is a very particular trait of the site's terroir and it means they can really push the ripeness of the fruit and get full resolution of tannins, knowing that the wines remain incredibly fresh, vibrant and incredibly long lived. It is this low pH that plays a large factor in the incredible ageing ability of this wine. Clos de Sarpe sits at around 3.2/3.3pH compared to the 3.7pH of most red Bordeaux. To give another reference point, some of the most aciditic wines in the world, like cool climate Riesling, sit around 3pH.

However, on tasting a fascinating vertical going back to 1978 at the Chateau we learnt from the winemaking team of Maylis and her uncle Jean Guy Beyney, that the changing methods of winemaking also played a huge role in the wines ageing potential and that Clos de Sarpe, like the rest of Bordeaux, has been greatly affected by the different trends in winemaking through the last fifty years.

The 1979 is a wonderfully truffled, fully tertiary wine, yet retains a wonderful freshness. On discussing the typical winemaking at the property during this time, Maylis told us that it was not the micro-oxygenation of a barrel that made this wine so age worthy but the long ageing on the stems post fermentation. Prior to the late nineties, no oak at all was used in maturation of Clos de Sarpe and this was still common practice for many producers in Bordeaux at the time. Instead they used the more traditional method of fermenting and ageing the wine on its stems, drawing out more tannins from the wine, helping to give the wine long ageing ability. Up until 1986, Clos de Sarpe was effectively 100% whole bunch matured in 100% concrete tank with the wine never seeing any oak.

Tasting their 1989 at 30 years of age, the wine was stunning. An incredible nose, so focused, so complex – truffle, hedgerow, rosemary, thyme, dried flowers, licorice, noble blackberry, black cherry, umami...really very complex in aroma and on palate. Combined with an incredible freshness and flinty minerality, dried fruit, sweet pastille and some glycerol too, the wine is fabulous. The wine is in really great shape. Amazingly at this time Clos de Sarpe were not even sorting their fruit! Every grape grown went into the mix regardless of its condition. With the 1989, it didn’t seem to matter!

It was only as the En Primeur system became ever more popular in the nineties that changes were afoot in the region. During En Primeur, buyers taste the wine just six months after the harvest. As this became the main route to market for many top producers, it was important the wines were showing well at this relatively young age. Whilst 100% whole bunch long-ageing on skins made the wines incredibly age-worthy, they were practically undrinkable for the first 10 years of their life! The success of En Primeur in the 80s and 90s made wines in this style economically unviable.

Clos de Sarpe only fully de-stemmed their wine from 2008 onwards and first introduced new oak barrels to replace the long maceration method in 1997. Prior to this it was a combination of partial stems in the blend and ageing in concrete tank.  Witnessing the success of neighboring Chateaux who had entered the en primeur market, Clos de Sarpe wanted to be part of it. They knew they had great terroir to easily compete against its peers and they wanted their share of the spotlight during this period when the world’s wine buyers' focus was centred on Bordeaux.

By 1999 the style had changed further. In 1998 they hired Michel Rolland to consult on their property and by 1999 they were using 100% new French oak to mature their wines. The 1999 is a beautiful wine in a wonderful part of its mid-life with that perfect combination of primary fruit and tertiary notes with lots of truffle, soy and fresh earth. The effect of Michel Rolland comes through in the wine, it has more power, more extraction (dried extract) and a lovely polished focus and clarity of fruit. At this point they were still adding stems to the tank with 30-40% whole bunch used in the 1999.

2004 saw the next major development in their winemaking, employing 20 people to sort the fruit prior to fermentation. This was a significant investment for such a small winery. 2004 was the first time the chateau had ever sorted their fruit prior to fermentation and from 2005 onwards they invested in an optical sorting machine. They were one of the first Bordeaux estates to invest in something, that has now become commonplace 15 years on.

By 2009 the wine became completely de-stemmed, whilst they continued to use 100% new French barrique for maturation. The tannins are incredibly polished, very silky, and there is less rusticity on the palate, with incredibly plush black plum, blackberry fruit married with lovely oxidative spice, and herbal and floral notes. The depth to the wine is wonderful with a great combination of smoky, truffle, desiccated blueberry, blackberry with graphite, ferrous minerality and lots of spicyness. It is a beautifully multilayered, rich yet taught wine with a tremendous structure.

What was clear tasting through the ages, all of these wines have a tremendous acidity and freshness, which is a real trait to the Chateaux.

Finally we were fortunate to taste their 2018 wine in all its separate components. We tasted their 60 year old Merlot plot versus their 100 year old Cabernet Franc vines, a plot in new oak barrique versus 1 year old barrels. With such a small production there are limited components but fascinating to taste them separately to really understand the complimentary elements that go into the final cuvee. It was fascinating to taste how different the structure and flavours were in each. The old Cabernet Franc has an incredibly deep colour and a vibrant floral perfumed aroma. More vertical in the palate than the Merlot and more structured but with a vibrant electric-like buzz.

The Merlot has a wonderful central palate density, incredibly silky and opulent with the clay soil giving a roundness to the shape on the palate, beautifully contrasting the verticality of the Cabernet Franc in the final blend. These days they have stripped back on the new oak, down to 70%. As Maylis states “I don’t want to make the same recipe every year. We need to adapt to the vintage. 2018 is a deep powerful vintage with a lot of structures that could digest more easily new oak compared to 2017”. The 2018 is a stunning wine – opulent yet incredibly fresh and that is a real testament to the special soil they have here at Clos de Sarpe and with just 5500 bottles made, will make this wine hard to source outside of En Primeur. 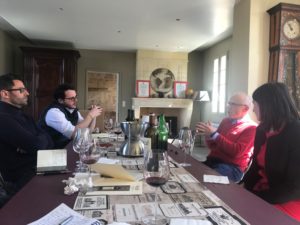 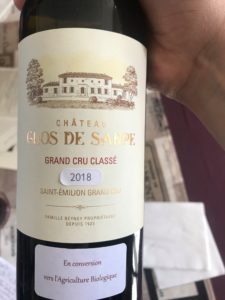