According to Burgundy expert Steen Öhman “the 2016 vintage is a blank new page waiting to be explored, consumed and enjoyed.” And as the 2016 Burgundy En Primeur campaign fast approaches, it’s time to put pen to that blank page...

Despite devastating frosts and hail experienced by many parts of the Burgundy region in 2016, all is far from lost, and we might just have in store one of the most memorable and hard fought En Primeur campaigns in recent history...

Andrew Jefford notes that Burgundy 2016 is “the perfect follow-on vintage to 2015 in all but one respect: those tiny quantities after the savage spring frosts.” However, although it is early days, there is a common thread in the critics’ appraisal of Burgundy 2016 so far... it is a classic vintage, one of balance and freshness:

“The 2016 red Burgundies are classic, cool and vibrant with plenty of charm and energy.” – Steen Öhman

“The whites from 2016 are sculpted and intense; the reds are poised, fresh and vivacious – also classical if you like.” – Andrew Jefford

“What remains is considered good quality in a classic style.” – Jancis Robinson

However, Burgundy is never quite that simple. Although stylistically many of the wines made in volume might be “classic”, the most important part of Jancis Robinson’s quote there is “what remains”, because in some cases that is very little. As the Purple Pages writer notes: “generalisations are impossible due to the complicated meteorological patterns throughout the year.”

Yields are low in 2016. Usually a sweeping statement like that suggests that the distribution is even. But, as Steen Öhman  puts it, this is “not a uniform vintage”.

Some areas were utterly devastated; Neal Martin reported “three waves of attack” by hail in areas, frosts “burning and blackening the nascent buds” and some produces losing up to 80% of their crops. However, he has also awarded scores of up to a potential 98 points in Chablis. This perfectly illustrates that although some have lost almost everything; some retained perfectly ripened crops and in fact produced staggeringly concentrated wines. Pommard, Volnay and Beaune have suffered; Clos de Beze and Bonnes Mares seem to have escaped relatively unscathed.

Last year Steen Öhman told us that “reports from producers are optimistic regarding quality.” From what we have tasted so far, that optimism was clearly well-founded, because quality is exceptionally high. But the patchy yields mean that the wines may not always be exactly what you expect…

Firstly, when yields have been reduced to just one or two barrels in some places, it can be a real challenge to perfectly balance new and used oak. Where this has happened, the resulting wines may not be quite “classic”.

Secondly, negociants have been forced to explore new regions and growers, so once again the wines may not reflect their usual styles.

Thirdly, producers will have to experiment where yields are low. Steen Öhman notes that “2016 is where both talent and effort is important.” A lot will come down to decisions made in the vinification process, which may be atypical due to the vintage constraints.

And finally, frosts usually hit low slopes, but in 2016 they hit many of the best sites on the mid slopes, so where you might have expected big losses in the village wines and basic Bourgogne, this year it is the Premier and Grands Crus that will either be exceptional or simply non-existent. And we are sure to see some declassified sites.

Quality will be high, but some of the wines will also be completely unique, unlike any you have tasted before. If you are lucky enough to secure wines from this vintage, they might well become the most talked about wines in your collection. So what can you expect from this unique vintage…

What should you expect?

Energy & Freshness: to quote Steen Öhman “it’s a feisty vintage with a lot of energy.” The wines will be fresher than the richer 2015s.

Scarcity: shopping around might not be an option. Volumes will be low and in some places where merchants have managed to secure barrels that will guarantee global exclusivity. The level of scarcity will become clearer over the coming months.

Widespread Variation: quality is high, but it is not universal. Respected critics’ scores will be doubly important in this vintage. It is worth noting that Steen Öhman has already started tasting and publishing tasting notes on WineHog and Andrew Jefford has awarded high scores to his first glimpses from Louis Jadot’s 2016s.

Comparable Vintages: although we have only tried a limited number of samples so far, stylistically they reminded us of 2005 – structured and concentrated – but with an added seam of elegance.

What can be concluded is that we are in for an exciting En Primeur Campaign with some staggeringly good wines. We will keep you updated as we taste more wines and as more critics begin to report back. In the meantime, don’t forget the incredible 2015 reds and 2014 whites still available.

Find out more on our Burgundy En Primeur page. 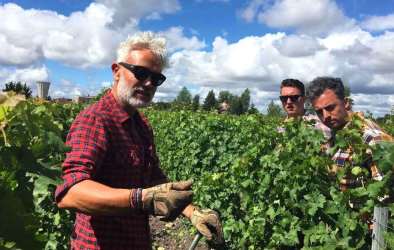