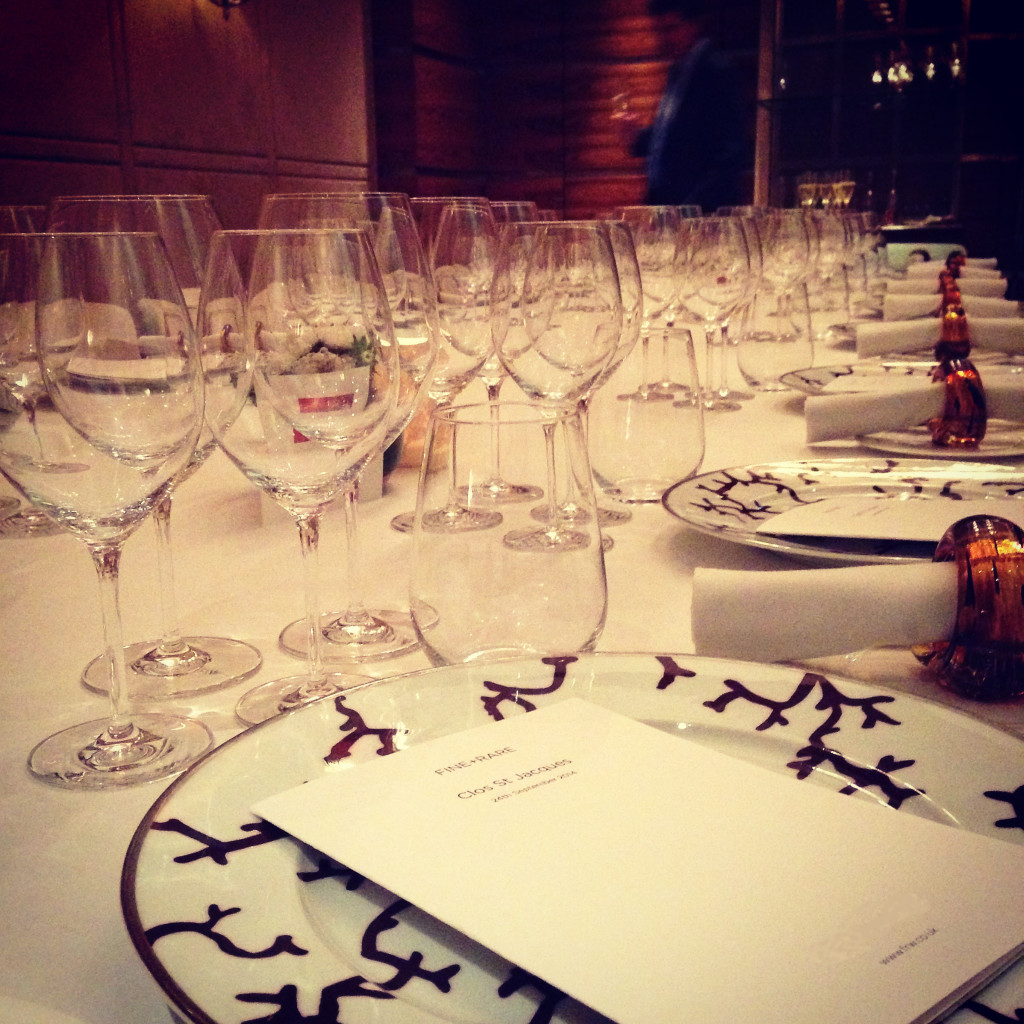 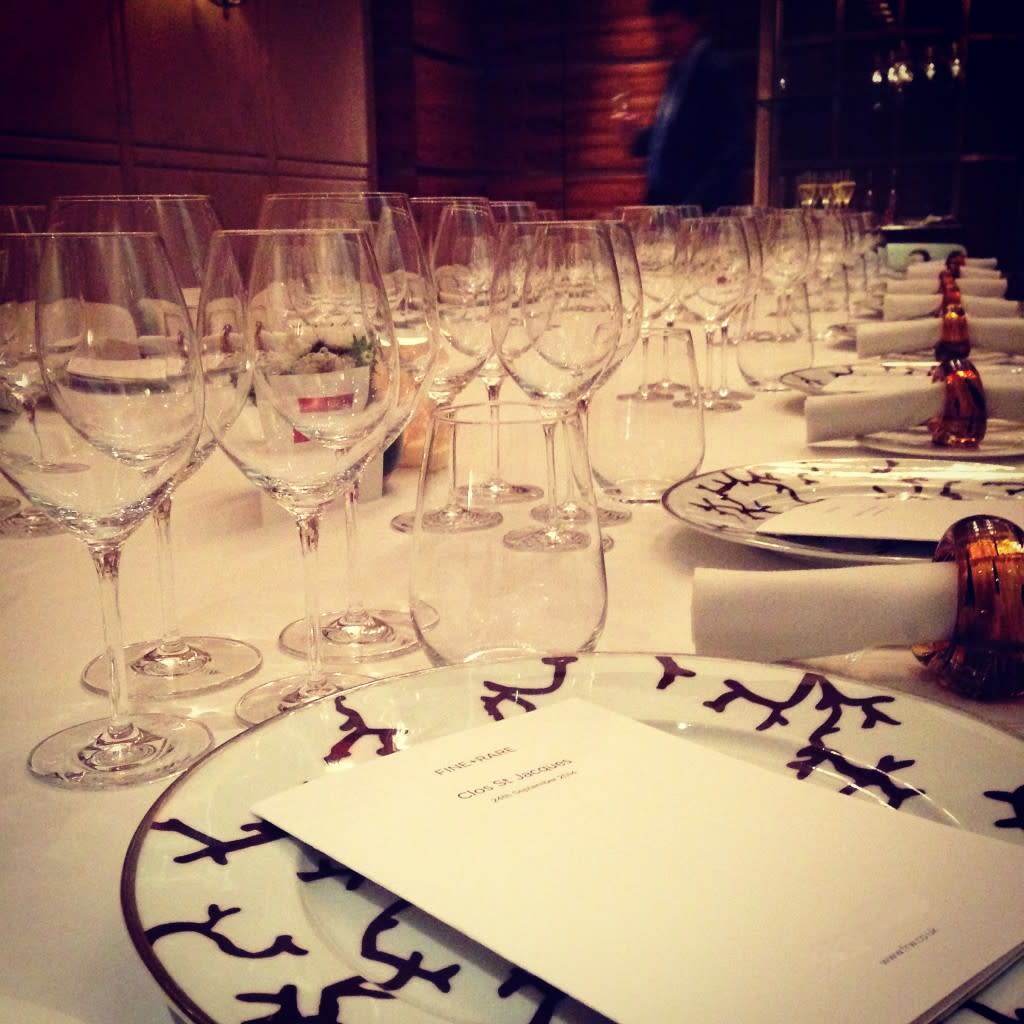 On Wednesday evening a group of F+R staff and customers sat down for a dinner and tasting that was as pleasurable as it was academically engaging.  The theme?  The Clos St Jacques.

The Clos St Jacques is a vineyard that intrigues for many reasons.  Firstly: the sheer quality of the wines, and their quite distinct character.  Secondly: why isn't it a grand cru?  Thirdly: as with most Burgundian vineyards, ownership is shared – this makes for the tapestry that is Burgundy – but the way that the Clos St Jacques is divided makes for a very interesting comparison.  Divided into vertical strips, in theory at least no grower has an advantage in terms of terroir. 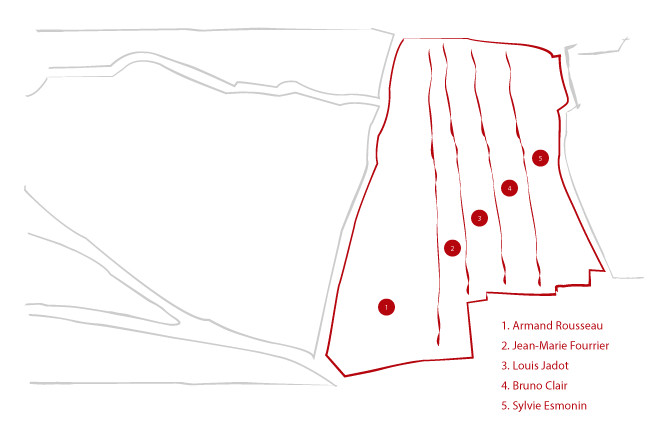 We started with a brace of 2006s.  One from Jadot, one from negociant Dominique Laurent.

The general assumption is that the source of the Laurent wine is Sylvie Esmonin, and the tasting endorsed this. The Jadot was tight, lifted and pure – I felt it needed another few years to stretch its legs and show its best – whilst the Laurent was immediately seductive on the nose and in the mouth and far more “ready to go”.  Better palates than mine might confirm the influence of both barrel and some whole bunch fermentation on the Laurent wine, which certainly seemed to show the hand of the winemaker more than the Jadot, which got better and better in the glass. The room was split in terms of the favourite, though I think it fair to say that I would rather own the Jadot, even if the Laurent seduced me at the time. Preference notwithstanding, the wines showed just how much difference a spot of winemaking can make…

The next pair were always going to be the highlights of the evening: 2000 and 2005 from the domaine that has become synonymous with Clos St Jacques, Armand Rousseau.

It is tempting to dismiss the Rousseau as trophy wine, and one can’t ignore the prices that the wines fetch.  Though just a sniff of each glass confirmed the class here.  Going further, with a sip of each, we all knew that we had something very, very special in our glasses.  It is rare to find perfection in any field, though these two were not far off.  Indeed the word that immediately sprang to mind was “flawless”.

For current drinking one would be hard pushed to find a better wine than the 2000.  It has the silkiness that is the hallmark of the best 2000s, though with a plumpness, a texture, that is rare even in the best vintages. An easy pass into my top five wines of the year. The 2005, though, is something else.  Still wound up very tight, there is immense power here from the start.  Everything is here: tannin, acidity and some beautiful Clos St Jacques fruit, and all in perfect harmony and balance. This is a very, very special wine that will want another ten years in the cellar at least.  Extraordinary.

A pair of 1999s followed from Bruno Clair and Jean-Marie Fourrier.

I think the vintage had an influence here: I’ve always thought 1999 a real “terroir” vintage and these were both very “Clos St Jacques”.  They were identical in terms of their development – both gave the impression of just awaking from slumber. They were drinking nicely, both have made the turn from fruit to farmyard, though both have much more to come. Qualitatively, the Clair edged it. It is worth remembering that Jean-Marie Fourrier had been making the wine at his estate for just a few years in 1999 and the Fourrier wines of this era are/were a work in progress.

The finale was a 1996 from Michel Esmonin et Fille (that fille being Sylvie, who had been making the wine here since 1990, or so).  I had read a couple of quite different notes on this wine and was intrigued as to how it would show. The acidity of the vintage is prominent in this wine, as is the use of some oak and initially the impression was of three separate parts: acidity, sweet fruit, and vanilla. With air these parts seemed to fuse together and this was one of the most seductive wines of the evening and, despite its age, I got the feeling that the wine would really come together with a few more years in the cellar. Even if the wines from Mr Rousseau were the highlight of the evening, this was maybe the perfect ending.

If you’d like to speak to us about any of the wines or producers mentioned, please email us. 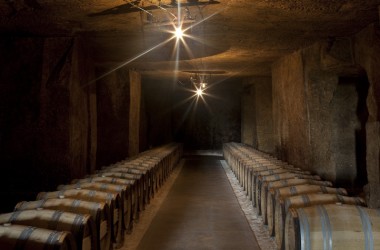