Not since 2011 have so many Port houses declared a vintage year. The good news is that the 2016s have been defined by their “purity and refinement” and the universal declaration indicates high quality across the board. The bad news is that production levels are down. For the Symington Family Estates Port houses, including Dow’s, Graham’s and Warre’s, production is 1/5 below the last declared vintage (in 2011) due to rigorous selection in the tasting room. Equally Taylor’s are warning below-average yields could tighten supplies.

* *Our friend and Port aficionado Tze Sam was in Port last week visiting all the top houses to get the lowdown on the latest vintage declaration. After speaking with Dominic Symington, he concludes that a great vintage year is always one in which the weather is hot and dry in the summer, with the grapes on the brink of shutting down (due to hydric stress). This makes the skins very thick, preventing the grapes from bursting. Then before the grapes raisin, the rain comes, softening the skins and making it easier for the flavours to be extracted through the intensive foot-treading extraction process. This was precisely what happened in 2016.

According to David Guimaraens (Technical Director & Head Winemaker at Taylor’s & Croft), other key elements to achieving such high-quality fruit are high rainfall in the spring, providing plenty of water throughout the growing season, followed by a long, even ripening period, making the grapes beautifully balanced. A late harvest means cool night-time temperatures during the winemaking process, ensuring “extended fermentation times, allowing for a gradual and gentle extraction: a factor that contributed to the elegance and finesse of the 2016 and the quality of the tannins”.

Definition of the style of the vintage varies between the different Port houses. Graham’s states the vintage is “intensely fresh and pure” whereas Quinta do Noval describes the 2016 as “concentrated and intense” - so it is clear the weather expressed itself quite differently at these sites. The region is so diverse that very different profiles can be produced.

For Charles Symington, the 2016 was the vintage to take risks, holding back on the vintage and picking late was the right decision with all their top Ports picked at the later dates in late September / early October.

He goes on to state: “the 2016 Vintage Ports are exceptional, with tannins that are amongst the most refined ever, supporting beautiful red-fruit flavours with extraordinary intense, purple colour. They have impressive structure and balance, with Baumés, acidity, tannins and colour in rare and perfect alignment. This is no doubt a result of the later ripening cycle which allowed our grapes to mature evenly and completely.”

How often is a vintage declared?

How can you secure your allocation?

The wines will be released En Primeur later in May. Tasting notes, scores and availability will be published as soon as they become available.

If you are interested in being notified about any of the Port 2016 releases, please click here to register your interest. 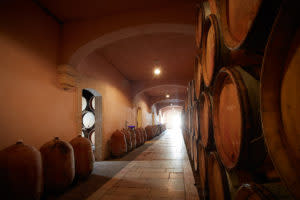 THE ART OF ELEVAGE – PART ONE: FREDERIC MAGNIEN