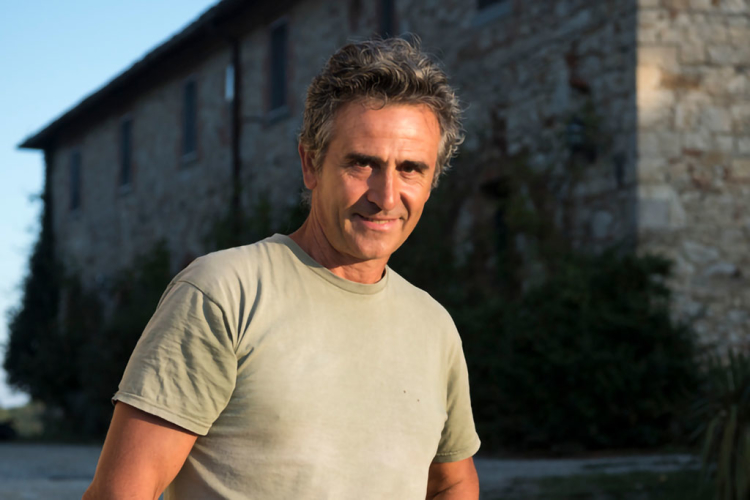 Luca Martini di Cigala, the man behind Percarlo and La Ricolma, is one of Tuscany’s viticultural pioneers. We spoke to the San Giusto a Rentennano winemaker about his role in the region’s renaissance and how he turned to the vineyard to reveal his wines’ true potential

Few wine regions have seen a transformation as significant as Tuscany has over the last 15 years. These days the region regularly produces some of the finest wines found anywhere on the planet, while retaining a distinct sense of place. Tuscany is the only region in the world to have truly tamed Sangiovese, with nowhere else able to grow this fussy grape variety and produce wines of the same level. At the same time, Tuscany has managed to produce some of the world’s finest renditions of the better-travelled international varieties such as Cabernet Sauvignon and Merlot; even Pinot Noir and Chardonnay are finding a foothold in this magical enclave of central Italy.

Few have been as influential in this transformative journey than San Guisto a Rentennano’s Luca Martini di Cigala, who has managed to produce not one but two of the region’s most iconic wines – Percarlo (100% Sangiovese) and La Ricolma (100% Merlot). In his typically modest manner, however, he does not believe great wines are made by great winemakers – but by understanding where a vigneron must focus their attention in the vineyard. According to Martini di Cigala, winemaking can improve the quality of a wine by no more than 10%. “Great wine, however, is made with great fruit,” he says.

So what is it about Tuscany that has resulted in the region’s recent renaissance? For Martini di Cigala, it has been understanding how the region’s unique soils and climate, if allowed, can produce wines where the character of the terroir prevales, rather than the varietal. “When it is the opposite and the varietal character is more evident than the character of the place, of the area, of the soil,” says Cigale, “to me it doesn’t make much sense.” It is the vineyard that must do the talking, not the grape variety, nor the winemaking.

While the Tuscan wine renaissance began in the late 1970s and early ’80s, the meteoric rise of the region was far from linear. Among the new wave of pioneers, there was naivety too and, understandably, external influences started to impact how wine was being made. Back then, San Giusto A Rentennano didn’t have their own personal brand, and were selling wine to the big wineries like Antinori and Ruffino. Following in the footsteps of the likes of Fontodi, Isole e Elena and Montevertini they decided to focus on improving the quality of their Sangiovese – which began, fundamentally, by reducing the yields in the vineyard. “Before that, we used to produce a good Chianti,” says Martini di Cigala, “a simple wine.” But, with these changes, “The stye completely changed and we began to focus on making wines for long ageing.” As the movement progressed, however, he began to sense a period of self-doubt looming.

“Compared to today, where there is a big improvement in the culture of tasting wines and recognising the character of the different varieties,” he says, “people were used to drinking rounder, softer wines. And Sangiovese [made at lower yields] can be so aggressive, so hard with the tannins – especially when young. It was a problem.”

At the time, many of the vignerons felt that in order to increase the wine’s ageing potential, the wines needed to be darker and more concentrated, while also exposing the wine to plenty of new oak and more oxygen – opting for smaller 225-litre barrels (barriques) rather than the region’s traditional larger casks. You could see the commercial attraction too, since this approach softened Sangiovese’s tannins.

Emerging regions like Tuscany were all looking towards more established fine wine regions for inspiration. The use of new barriques was fashionable around the world but, most notably, part of the Bordeaux recipe of the time. Twenty years ago, Martini di Cigala believes, they wrongly followed these trends, producing intense, overripe, over-oaked wines. “It was a mistake because many wineries didn’t keep the character of the Sangiovese – either due to excessive use of wood, which does not integrate well with Sangiovese, or because it was blended with other varieties to build the wine’s intensity, while softening its aggressive nature.” 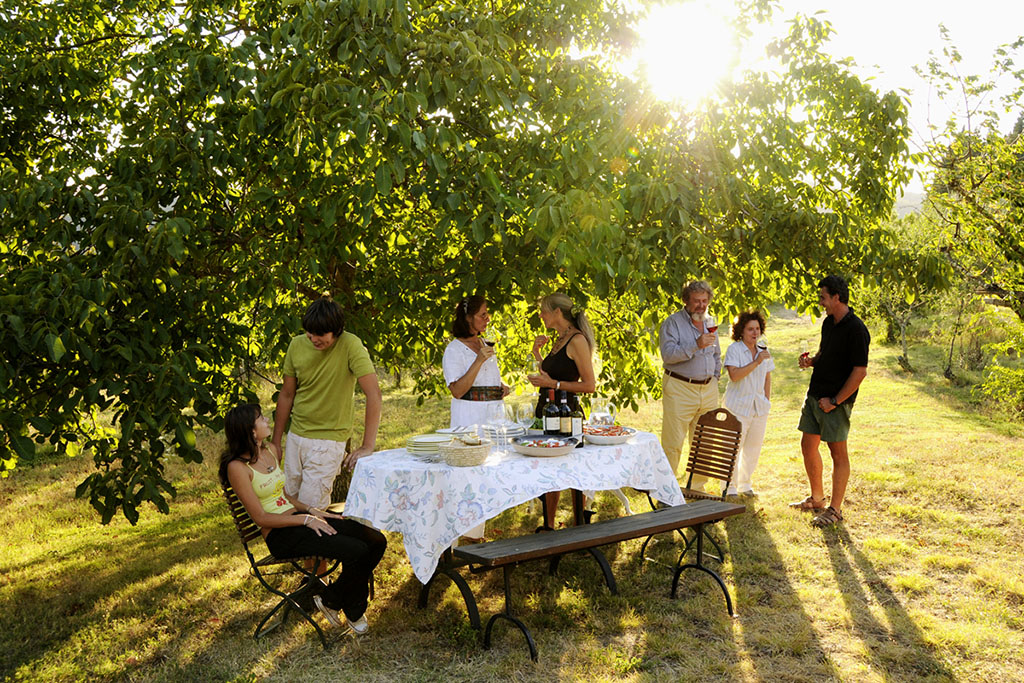 It's a family affair at San Guisto a Rentennano

For Martini di Cigala, even his Merlot plantings weren’t performing well – despite being a variety better suited to the current trends, with better resistance to new oak’s influence. The current recipe was not working for him – or for Tuscany. Early in its renaissance, the region began to stumble.

Martini di Cigala’s success came when he realised that, despite sharing the same vineyards, his Merlot and Sangiovese had very little in common. To produce anything better than ordinary, he had to start treating the two varieties completely differently and let the vines do the talking.

Sangiovese is a frustratingly fickle variety. It has the potential to produce wines as ethereal as the finest Pinot Noir and as rich and elegant as fine Bordeaux. Yet it has failed to make any real imprint outside Italy and, even today in Tuscany, it remains maddeningly inconsistent.

“Compared to other varieties like Merlot, Cabernet Sauvignon and Syrah,” he says, “these varieties can produce wine everywhere. With Sangiovese it is hard because it needs calcareous soil in order to produce the right balance of tannins. In any other kinds of soil, it either increases acidity too much or the opposite, making the wine very flat. To produce a wine with a precise character with a lot of tannin but at the same time integrated with the fruit, Sangiovese needs calcareous soil.”

But, he stresses, it is not only the soil but the climate that is important too. “It is difficult to have great Sangiovese that is very, very light, low in alcohol and low in polyphenols [tannins]. The wine must be rich,” he says. The region must be hot. The elegance and the precision, however, come from another distinct attribute of the hillsides of Tuscany: cool night-time temperatures. This, Martini di Cigala believes, is vital for the elegance of the wines – and something that can be lost in warmer vintages.

“Sangiovese is very delicate, if there is too much concentration, the level of tannins risk damaging the wine’s natural elegance and the balance,” says Cigala. For me it is a great wine when the wine doesn’t need to show muscle. It is not important to be extremely concentrated or to have a lot of colour for a great vintage. It is more about the balance of the different factors.” He notes that some of the most celebrated vintages aren’t necessarily the longest-lived, highlighting that the cooler 2013 and 2014 vintages will outlive the much applauded, warmer 2015s – although he insists 2016 has proved to be spectacular.

Percarlo evolved as Martini di Cigala gradually understood Sangiovese’s sensitivities. Up until 2008, Percarlo was aged 100% in barriques. First produced in 1983, the amount of new wood has been reduced over the years. Today he doesn’t use any barriques at all for Percarlo, or for any of his other Sangiovese wines (Chianti Classico and Riserva). He believes Sangiovese is too sensitive to oxygen to age in smaller barriques. Today it is matured 50/50 in large 5,000-litre and 3,000-litre barrels.

Martini di Cigala didn’t start producing Merlot until 1993, but for the first 10 years, he managed the vines similarly to his Sangiovese – with mixed results. “Sometimes the vintage would be very Tuscan in style and then the opposite in other vintages – the aromas were more like Merlot from north Italy with more pepper on the nose. I was never convinced with the results,” he says. The Merlot in Chianti Classico is also very different to the Merlot grown on the Tuscan coast of Bolgheri. The bigger diurnal temperature shifts in the Tuscan hills produce Merlot with more acidity. The wines are, in Martini di Cigala’s words, “more vertical”.

The real success of both Percarlo and La Ricolma, Martini di Cigala believes, lies in the bespoke adaptations he started to make in the vineyard for each variety. Sangiovese really benefits from an early green harvest in July – reducing the natural yield. Merlot, on the other hand, proves to be a disaster if you do the same thing and limit your yields so early in the growing season – causing a spike in sugar production at the expense of tannin development. Martini di Cigala also painstakingly picks the Sangiovese destined for his Percarlo bunch by bunch, assessing each vine individually. Picking Merlot bunch by bunch, in contrast, makes no sense – “it is far too irregular”. While Sangiovese yields can be manipulated throughout véraison to its benefit, Merlot needs to be left alone. “The key for Merlot”, he says, “is to try to slow down its ripening. If the variety doesn’t have a long growing cycle, the wine remains short.” 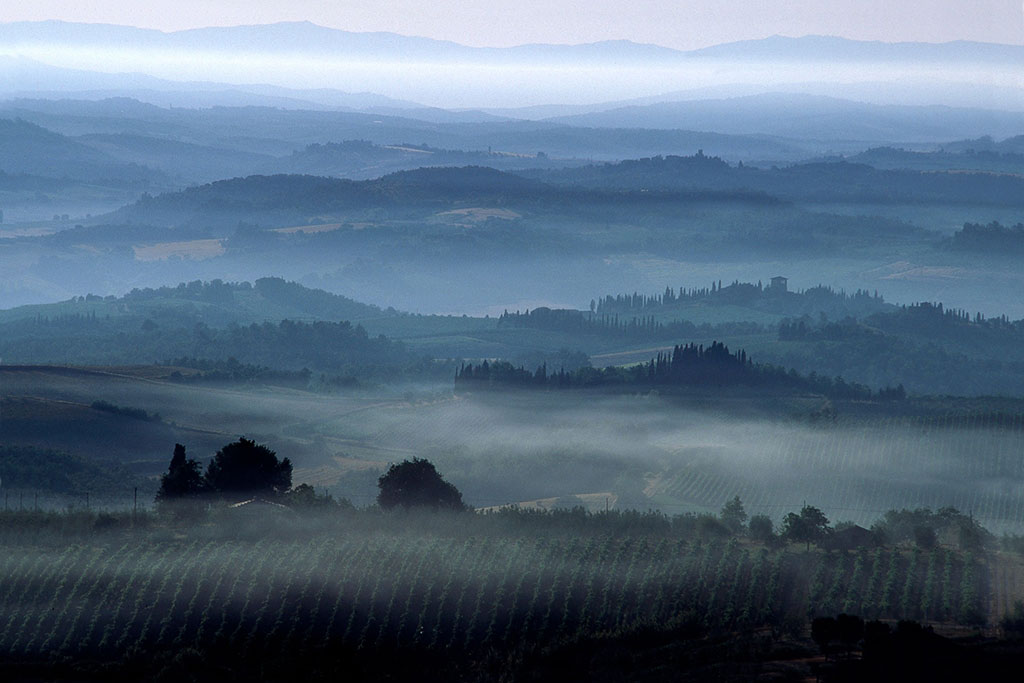 The Tuscan foothills of Chianti Classico

Over the years Martini di Cigala has moved his Merlot vines to the coolest parts of his vineyards. He admits his original La Ricolma Merlot plot is his worst, its west-facing exposition making it too warm. He much prefers his plots closer to the river where temperatures are lower. But the key viticultural work for both his Merlot and Sangiovese starts earlier – he is keen to point out that there is no recipe each year, the cultivation has to be very precise depending on the vines’ needs. “You have to be a good interpreter of the season. Often you don’t notice the stress in the vineyard until July, by which time it is too late. You have to follow the trends of the weather earlier – this is the most difficult point of our job and has become especially true in the last few hotter years.” Each viticultural step has to follow the trend of the season. That, for him, is the key.

Over nearly 40 years Martini di Cigala has continued to make tweaks in the vineyards, further improving the wines. Up until 2004 he used to select the Percarlo grapes only from certain parts of the vineyard, but now the fruit is picked bunch by bunch – another fundamental reason, he believes, the wines’ quality has escalated.

Martini di Cigala has proven that wines made from Sangiovese and Merlot can be both bold and beautiful, aligning the Tuscan hills’ unique climate with precision viticulture. The hot summers and cool night-time temperatures matched with the calcareous soils are the perfect combination for Sangiovese and are testament to Merlot’s adaptability. After a period of self-doubt and mixed results for the region, the Tuscan renaissance today has well and truly found its foothold and is on an extraordinary run. And it is Percarlo and La Ricolma leading the pack.

“If you asked me to name 15 great wineries in Chianti Classico 20 years ago, I would be in trouble,” says Martini di Cigala. “Today I could arrive at 50 or 60.” What has changed most today, according to the winemaker, is a paradigm shift in focus from winery to vineyard. While he is a little disappointed more of them haven’t turned to organic farming (of which he is a longstanding proponent), he believes the change has been very positive. A noble name, a castle, or a famous winemaker today no longer makes the headlines in Tuscany. It is precision viticulture that has taken these distinct wines from the Tuscan hills to the top of many collectors’ wish lists. 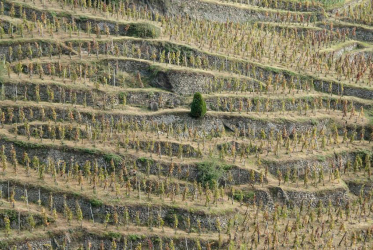