EditorialwinesTimo Mayer - bring back the funk!

Timo Mayer - bring back the funk! 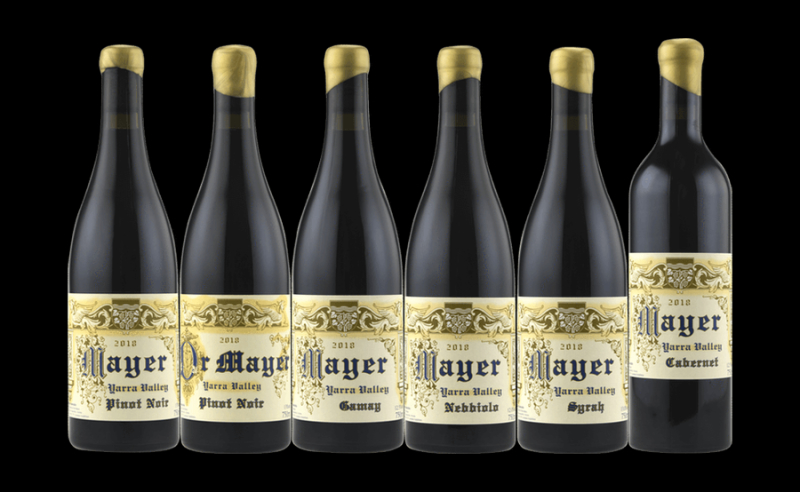 Despite Timo’s multi-generational family history of winemaking in the Wuttemburg (Baden) region of Germany, his ascendancy into the wine world was not the familiar path of simply taking over the family farm.

Timo left Germany to explore the world and ended up in Australia in 1991, fell in love with a girl from Melbourne and spent the next few years enjoying beach life off the North East coast of Queensland. It was only after their first child that Timo had to start thinking about getting a proper job!

Deciding they wanted to be closer to their maternal family they moved down south to the Yarra Valley (one of the four winemaking regions around Melbourne) and Timo landed a job driving tractors at the De Bortoli wine estate in 1996. Under the guidance of Steve Webber at De Bortoli, Timo witnessed a quality revolution start to place in the Yarra Valley and it wasn’t long before he started looking for his own site to make his mark.

With little capital to hand, Timo bought a steep sloped site previously used for grazing sheep rather than growing grapes. Other vignerons had passed up on the land as it was too steep for tractor use, making it a site incredibly labour intensive and thus expensive to maintain. The site was half the price of neighbouring flatter slopes but Timo saw the potential and the offer seemed too good to let go. He bought the land in 1998, bought cuttings from his favorite vineyards dotted around the Yarra, and the “Bloody Hill vineyard” was born.

The 3 hectare site is planted on the edge of the Great Dividing mountain range. Timo explains there is a very thin layer of top-soil and dig half a metre into the ground and it is pure rock. It was planted mainly with Pinot Noir (2.5 hectares) with the remaining rows made up of Syrah and Chardonnay. The site is part north and partly east facing, providing two different flavor profiles of Pinot Noir and giving Timo room to play around with at blending. The east facing side is a cooler site and produces a more savoury, tannic style of wine, whereas the north facing warmer site produces a riper, more fruity flavour profile of Pinot. 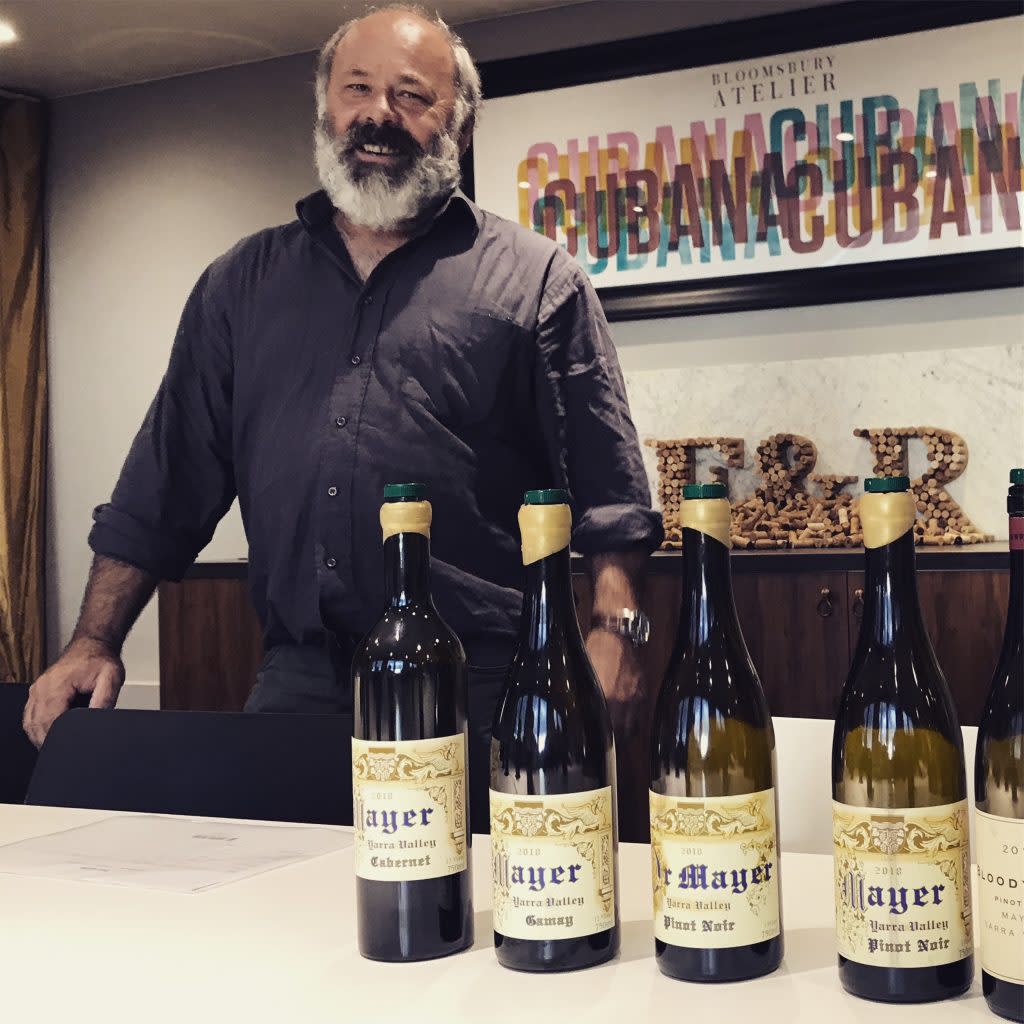 The first vintage was in 2002 and over the next 15 years Timo set about perfecting his skills as a winemaker. In this relative short time he has become very well known in the region and with the support from both critics and sommeliers around the world, his wines have become much in demand. The tiny production levels certainly only make it harder to source.

His quick rise to prominence came about largely down to his distinct style and his fearlessness in trying new things. He was the first producer in the region to produce a 100% whole bunch Cabernet Sauvignon (from grapes he bought in the Yarra) – which certainly raised eyebrows in the close-knit community of winegrowers. While his use of whole bunch and carbonic fermentations have quickly helped his wines gain a distinct identity, his distinctly European labels also have helped his wines stand out in the region.

Like many younger generation winemakers, Timo plays down his achievements, but on tasting the 2018 wines from Mayer, you can't deny that he is producing some extraordinarily exciting wines.

Timo explains that the 2018 vintage in South Australia was much like the 2018 vintage in Europe. There was very calm weather from budding through to flowering, producing decent sized crops with even ripening and enough rain to keep the vegetation lush yet disease free. The summer was warm and dry which enabled high volume yields to reach optimum ripening. The harvest took place in perfect dry conditions. 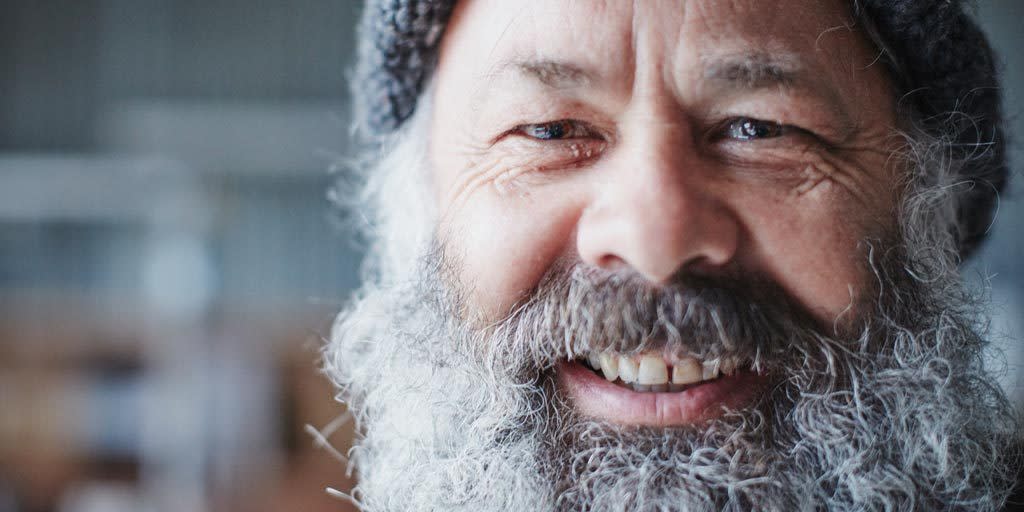 Timo’s wines are largely known for their high proportion of whole bunch fermentations (fermentation with the grapes kept on the stems – the traditional winemaking process universally used up until the invention of the de-stemmer), which provide an additional herbal, wood sap and orange bitters aroma and flavor complexity. However, he does produce wines with varying degrees of whole cluster use. His “Bloody Hill” Pinot Noir actually doesn’t contain any whole bunch fruit, the wine is completely de-stemmed. The wine has a lovely vibrancy and sharpness because he dares to pick 25% of his fruit early – prior to full phenolic ripeness. He wants those green tannins to add energy and vibrancy to the wines which he then blends with the rest, made from fully ripe Pinot grapes.

His Close Planted Mayer Pinot Noir is made up from 50% whole cluster fermentation and 50% destemmed fruit. The difference between the Bloody Hill and the Close Planted is the vine density between the two. Close Planted (the clue is in the name!) is planted at double the vine density – 6000 vines per hectare and you can really notice on the palate with additional power, flavor intensity and more dry extract and concentration. The whole bunch also adds more aromatic complexity.

The Dr. Mayer Pinot Noir is 100% whole bunch fermented and wow it really is impossible to ignore. Whereas with the close Planted Pinot the whole bunch aromas/ flavours sit alongside bright fruit; with the Dr. it is pure herbs, spices and perfume. Timo is not afraid to let the wine go through a carbonic maceration for the first half of the ferment to give it a lovely complimentary “berry lift”, but the sappy herbal elements dominate the palate.

With the growing demand for Timo’s wines and his desire to experiment he has started sourcing fruit from around the Yarra, producing 100% whole bunch wines from Cabernet Sauvignon, Gamay, Nebbiolo and Sangiovese. The idea of using such high proportion of stems in a 100% Cabernet Sauvignon certainly raised some eye brows in Yarra, but on tasting the wine it really is unlike any Cabernet you are likely to have tasted.

Whilst he religiously doesn’t fine or filter his wines (a process often carried out to take away the harsh tannins on high tannic varietals such as Cabernet Sauvignon) he needs to reduce the natural levels of tannins another way. His method is to begin the ferment using the carbonic method -typically used in Beaujolais (fermenting the wines under a Co2 cover) and no maceration of skins before finishing it off under normal fermentation conditions. The result is a wonderfully aromatic Cabernet, light yet structural tannins and incredibly approachable in its youth.

Quality Cabernet Sauvignon made in the traditional way (and with no additional filtration and fining) made in the fresher greener European style requires a good 10 years for the tannins and structure to balance out. However for Mayer this unusual approach has provided a Cabernet Sauvignon that is both serious and approachable in its youth without requiring fining or filtration, whilst retaining flavor intensity, extract and length. The wine doesn’t have the same structural complexity most commonly associated with quality Cabernet Sauvignon, but it is a beautiful wine. It could be described as Cabernet Sauvignon for Pinot Noir lovers. Whatever the varietal, Mayer’s methods are producing some stunning wines and if you can find them, do not hesitate to secure a case. The 2018s are released next week.