EditorialwinesThe Sub-Regions of Barolo and their very different flavour profiles

Why is it important?

Understanding the sub regions of Barolo is really worth some investigation because generally speaking each of the communes have a distinct flavour profile clearly differentiating its terroir from its neighbours. Many consumers are unaware of the different profiles and can be quite surprised by the Barolo in their glass tasting very different to the one they had previously.

For some, the variation in style similarly to Burgundy gives the region another level of interest and investigation allowing the drinker to explore at will the fascinating variations of the region. For others it is just another added complexity to an already complex wine already greatly affected by the style the wine is made in depending on the winemakers techniques as well as vintage variation.

Historically the sub regions were not so important largely due to the fact that Barolo wines existed exclusively as blends. According to the “L’Enciclopedia delle Grandi Vigne del Barolo”, 1961 was the first significant turning point when both the Prunotto winery released a single region ‘ Barolo Bussia’ and Vietti similarly released a single region ‘ Barolo - Rocche di Castiglione’. It was common knowledge amongst the local grape brokers in the region what were the most renowned zones producing the best Nebbiolo in the valley but it wasn’t until the 1970s when these place names first came to print in Luigi Veronelli’s ‘Carta del Barolo’.

Following the DOCG designation of Barolo in 1980, international interest in the region and the wines gave winemakers in the region more confidence in producing more single sub region Barolos as well as single vineyard cuvees. 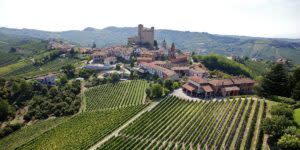 The vineyards of Serralunga d'Alba

The characteristics of the sub regions of Barolo

At the most basic level Barolo is divided into two valleys (the Central Valley and the Serralunga Valley) The Central Valley sub-regions of La Morra, Barolo and Novello produce the more approachable style, noted for their fragrance and elegance. The Serralunga Valley sub-regions of Castiglione Falleto, Serralunga d’Alba and Monforte d’Alba creates the more powerful, longer-lived powerfully concentrated wines. Each sub-region produces quite distinct characteristics. Starting from the lightest to the most intense the basic flavour profiles are: 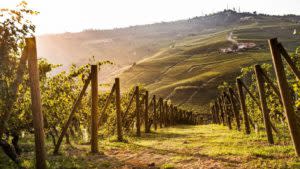 The sub-regions of Barolo

**La Morra – **Defined by its fragrance (lavender, dried flowers and violets) and softness with smooth fine tannins. La Morra is the largest of the sub regions. Top vineyards within the region include – Brunate produced by Vietti, Ceretto and *Voerio.* Cerequio produced by Chiarlo and Voerzio and Rocche dell’ Annunziata produced by Corino, Scavino and Ratti. Predominantly sandy soil, the wines style is one of elegance and harmony. However being the largest commune there is also some variation and for winemakers like Roberto Voerzio (based in La Morra) due to his vineyard techniques produces much more powerful wines than normally associated with the region. These wines therefore can be much more approachable in youth.

Barolo – The Barolo region similarly to La Morra produces broad open velvety Barolo but often with a bit more structure and concentration than the La Morra style. Top vineyards and producers include – Brunate vineyard (producers – Rinaldi and Marchesi di Barolo), and the most historic premium cru site of Cannubi (top producers are Prunotto and Scavino) and Cannubi Boschis made by Sandrone.

Castiglione Falletto – Although situated in the Serralunga valleys the style falls somewhere in the middle between the elegant and fragrant qualities of La Morra and Barolo and the boldness and concentration of Serralunga. This is due to the aspect of the best slopes in Castiglione where the vines have maximum exposure to the sun maximising ripening conditions giving the wines added concentration. Some of the most famous vineyards in the region are situated here including Monprivato (G. Mascarello), Fiasco (by Scavino- on his label labels it ‘Fiasc’) and Villero (Giacosa & Vietti). 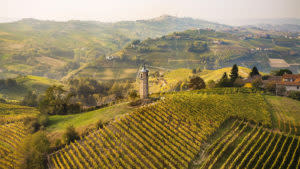 The vineyards of Cannubi (Barolo)

Monforte d’Alba- Defined by concentration and structure. The soils contain more clay than limestone (the opposite of Serralunga) producing more volume on the palate and boldness producing the most concentrated style of Barolo of any region. Top vineyards are Bussia (although this vineyard in itself is the largest single vineyard and can produce varying styles) Top producers include Aldo Conterno. Other top vineyards are – Ginestra made by Clerico and P. Conterno and the Mosconi vineyard produced by Rocche di Manzoni. Wines exhibit classic rose petal, clay pot, clove, camphor, and cardamom aromas - classic characteristics of Barolo.

Serralunga d’Alba – Defined by its limestone soils the growers here talk about the vines feeling pain as the harder soils put more stress on the vine producing wines of great depth and power as well as some of the highest tannin levels and the most full bodied Barolos of any region. The wines from Serralunga can often have a distinctive bitter orange aroma. The wines are solid and austere but can also be elegant and expressive and the most terroir driven and long lasting of all the regions. Top vineyards and producers include Falletto produced by Giacosa, Francia produced by Giacomo Conterno and Vigna Rionda by Massolino and Oddero.