Last week, I met up with Benoit Tarlant, the vigneron behind the Curvee Louis and La Vigne d'Antan Champagnes - two of the most unique expressions of the region. Benoit's aim in his top cuvees  is to re-engage with the historical cultural heritage of winemaking in the region. He wants his wines to move away from the standardising modern day Champagne processes towards a more human-sized operation, dictated by a sense of place rather than process. Some of his current experiments are attempting to go even further than that, incorporating methods that predate Champagne production in an attempt to come full circle, linking modern day Champagne production to original winemaking techniques used thousands of years before.

Champagne production, in the grand scheme of things, is modern day wine production and involves some of the most processed winemaking in the world. In many ways it is these processes that shape what we have come to recognise as Champagne. The second fermentation in bottle, the rich bready aromas from the extensive ageing on its lees, the vinification of just three distinct varieties, the blending of back vintages and the sweetening dosage at the end are all processes that are used to add complexity to the wine, but they also serve to “standardise” the style and flavour of these wines.

This standardisation in many ways has been the great success story for Champagne production. It helps producers offset lesser vintages by blending different vintages together to even out quality. Dosage is often used to sweeten and soften tart acidic fruit balancing out the wine on the palate. Even the long ageing on lees helps to dial down the sometimes sharp and sour tartness found in Champagne, making it more approachable. These processes are some of the key reasons behind securing Champagne’s reputation as the globally recognised celebratory drink.

While “standardisation” is no doubt vital to most Champagne production, Benoit wants the top cuvees of his Tarlant Champagnes to tell a different story. A story of place, of uniqueness, and one that is as far away as possible from the standardised methods synonymous with modern day Champagne production. His “La Vigne d’Antan” is completely unique, being the only ungrafted Chardonnay vines that exist in Champagne. It is the Chardonnay equivalent of Bollinger’s Vieilles Vignes Francaises (which is also 100% ungrafted, but from Pinot Noir vines). No other ungrafted Chardonnay exists in Champagne.

The only reason these vines have survived is due to how sandy the soil is in the single vineyard site of “Les Sables”. The sand content in the soil means the dreaded phylloxera bug cannot survive in the vineyard (for those that don’t know, the phylloxera bug destroyed 99.9% of all vines in Europe in the late 1800s and now virtually all European vines require to be grown on American rootstocks to survive).  La Vigne d’Antan survive as the vines of yesteryear and Benoit believes is an expression of Chardonnay that no longer exists in Champagne outside of this vineyard. A Champagne that produces flavours and aromas forgotten in the region. I pushed Benoit to go further in explaining what he really thinks the difference is. Overlooking the Shard building he pointed to it and said imagine that turned upside down and that is the structure this wine gives you in the mouth. Other Blanc de Blanc Champagne cuvees tend to have great poise and a linear structure in the mouth, but this ungrafted Chardonnay starts really broad in the mouth then becomes more and more focused to a point in the palate - “I usually say it is like an inverse pyramid but maybe the Shard analogy is better!”. 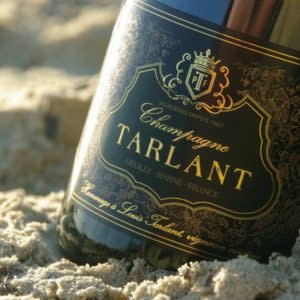 Benoit’s top cuvee is “Cuvee Louis” another Champagne made from a single site expression, but made up of 50% Chardonnay and 50% Pinot Noir. This single vineyard site called “Les Crayons” was identified by his great-great grandfather as a site of exceptional quality, but was only first made as a single vineyard Champagne in 1982 and began to be matured in oak barrels in the late eighties. Both of these techniques at this time were a highly unusual approach. It’s not hard to see why. Frost in Champagne is a killer and for most it is too risky to rely on a single vineyard to produce wine every year. For Benoit it is a risk worth taking, particularly as it is a site very susceptible to frost being so close to the river.

I ask Benoit what is so special about the site. He explains that the site is incredibly chalky right to the surface of the vines. You can literally pick up earth from the site and write with it. This chalk is a magical ingredient to the top vineyards of Champagne because it moderates water so perfectly. In a region that can get very wet, the chalk is excellent at absorbing water away from the vines, at the same time locking in water so in periods of drought to be released when needed to hydrate the vines.

The other key factor to the site is its proximity the river. Benoit explains that there are two styles of wine made in single site Champagne. It is either a Mountain Wine or a River Wine and Cuvee Louis is a River Wine. Benoit explains that the river is a great moderator of heat, avoiding any excess -“In Champagne we don’t need too much sun. The sun makes sugar but not the aromas”. Sun in a fresh moderate atmosphere produces aromatics in the grapes. Benoit compares it to tomatoes grown in a greenhouse. “Yes they may be sweet because they have lots of sugar, but they have no flavour. Freshness keeps aromatic sensitivity in the grapes”. This slower maturing of the grapes through the growing season produces high concentration of flavour whilst retaining all the vibrant acidity and adequate sugar production too. All these benefits are ideal for a long aged Champagne such as the Cuvee Tarlant. The wine is aged in four year old oak barrels – which help build layered texture in the palate. With such a linear acidity the Champagne is robust enough to be battonaged regularly prior to second fermentation adding further body and richness. The current Cuvee Louis release is made up of vintages from ‘96, ‘97, ‘98, ‘99 and ‘2000 and has been aged together on its lees for a staggering 15 years. Due to the natural richness, the wine needs no dosage following disgorgement which took place in 2016.

Benoit’s approach is to bring out more of the natural elements that put their stamp on the wine. Of course he doesn’t do this at the expense of all winemaking processes, but he hopes the terroir of these special sites of “Les Crayons” in his Cuvee Louis and “Les Sables” in his La Vigne d’Antan shines out beyond the Champagne processes. These days Benoit keeps returning back to Georgia where his re-engagement back to the winemaking techniques that pre-date Champagne is his next step in a move further away from standardisation. Since being mesmerized by the wines of Georgia grown in underground clay pots fermented on their skins he has since imported some large Georgian clay pots (Qvevri) himself and has started to experiment making Champagne in ways that acknowledge the historic path of Champagne production as well as attempting to produce Champagne with techniques that predate it. We look forward to the results and salute Benoit's exploration into the unknown.