Click here to view the full selection of wines from the Massandra Collection available at FINE+RARE.

In March FINE+RARE held a very special public tasting of fortified wines from the enigmatic Massandra winery, on the south coast of the Crimean peninsula. The wines spanned the entire history of the winery - from 1983 all the way back to their first ever vintage in 1894. The grapes are picked relatively early, with no desiccation or noble rot, to retain very high acidity. Fortification takes place early into the fermentation. Massandra claim their top wines only reach their optimal drinking window after 40 to 60 years in the cellar.

Every single bottle was in fabulous condition, a testament to the longevity and robustness of these truly fine and rare wines... especially considering the journey they have been on, passing through the hands of the likes of Stalin prior to reaching us in London in 2018. The Massandra winery has one of the most fascinating histories in all of wine, finding itself actively involved in many of the distinct political epochs throughout the turbulent history of the region - from Tsars to Despots, through Revolution and Reform.

The Massandra winery was originally built for Tsar Nicolas II in 1894 who wanted a winery to produce fine wine specifically for his royal palaces. Following the Russian revolution and his execution, Stalin (then General Secretary) ordered all the wine from the palaces to be brought back to the Massandra winery. In 1918 the winery became nationalised and later state protected under the USSR. Just before the Nazis invaded and occupied the Crimea in 1942, Stalin personally ordered the entire Massandra Collection of fine wine to be packed up on horse and cart and sent to Georgia for safekeeping. He later ordered the return of the wines back to the winery after the war. Extreme and dramatic efforts during such a turbulent time indicates the value the Russian government placed on these wines.

Even in modern times, the winery remains at the centre of political events in Russia and the Ukraine. Following the collapse of the USSR and the independence of the Ukraine, Russia stopped trading with the winery, which was by far its largest market. In Russia, Massandra is the third most recognised brand in Russia. Facing bankruptcy, and desperate to pay its 4500 workers following the collapse of the Soviet Union in the mid nineties, for the first time in its history, Massandra sold some of its finest wines to collectors in the West.

Following annexation of the Crimea, the Massandra winery is now back under Russian control and EU and US sanctions have again closed the door to any further exports to the West. In 2014, Putin visited the winery with Berlusconi where they opened one of the oldest wines known to exist on the planet - a 1775 bottle of Sherry originating form the Tsars initial collection. Following this, the Ukrainian government in exile pressed charges of embezzlement against the current Russian manager of the winery for opening such an historically important bottle.

The F+R Tasting was an incredible journey through time. My personal favourite was the 1939 Kagor Ayu Dag made from red varietals with one of the most haunting and complex aromas I have ever experienced. Just to think that they even made wine there in 1939 is pretty unbelievable, the fact that it is still in existence following the proceeding years is another incredible feat and the fact that it is showing so well after 80 years in bottle leaves you speechless. The 1894 was equally extraordinary. The wine had another level of rich viscosity. So dense and unctuous that everyone's eyes lit up in astonishment on tasting it. Every single wine (8 in total) dating from 1983 to 1894 was in perfect condition and a showcase of the different varietals they fortify. Most reputable from the winery is their white, pink and black Muscats, but their Pinot Gris and Tokays were equally impressive. 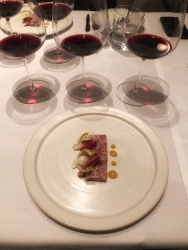