EditorialwinesNew Releases Not To Be Missed This Month: September

New Releases Not To Be Missed This Month: September

As the summer holidays draw to a close, the wine industry bursts back into action in September with a flurry of new releases from some of the world’s finest wineries. Top releases this month include wines from almost every corner of the globe, providing something to suit everyone’s tastes. The most notable releases include Masseto 2015, Chateau d'Yquem 2016, Solaia 2015, Hommage a J Perrin 2016 (Chateau Beaucastel’s top Chateauneuf du Pape) and Opus One 2015.

These wines are on many collectors' wishlists but this year excitement is at an all-time high with a string of top vintages from various regions meaning that the releases are some of the best wines ever made at these estates.

Solaia is one of the two flagship wines coming from Antinori’s Tenuta Tignanello estate based in the heart of the Chianti Classico region. First produced in 1978, Solaia is only made in top vintages. Whilst the Tignanello cuvee is their predominantly Sangiovese based blend, Solaia is the estate's Cabernet Sauvignon cuvee with additional Cabernet Franc and Sangiovese incorporated into the blend. The use of Cabernet Sauvignon in both Solaia and Tignanello, despite the estate's location in the Chianti Classico region, means both wines are classified as IGT Tuscany. Antinori was one of the original estates to champion the term “Super Tuscan”.

Both Solaia and Tignanello vineyards are situated on neighbouring hillsides; Solaia’s 20 hectares, at an altitude of 400 metres, are south-west facing and located in the sunniest part of the Tignanello estate. The name Solaia means "the sunny one". Following a recent visit to the winery and a retrospective tasting, Antonio Galloni from Vinous states: “I am convinced the Solaia vineyard is one of the greatest sites in the world for making wine”.

We have been consistently praising the quality of 2015 Tuscans at F+R and with Solaia up there as the crème de la crème of the region, this is one vintage not to miss. Whilst we still await reviews from the Wine Advocate and Vinous, James Suckling has already scored the 2015 a perfect 100 points, describing it as potentially the greatest Solaia ever made: “The nose to this Solaia is truly phenomenal with currants, blackberries, roses and violets. So perfumed. Full-bodied and everything is in check and harmony with polished tannins that last for minutes. Purity and focus. Is it the greatest Solaia ever? So drinkable already, but this is a wine for ages ahead.”

Opus One was a joint venture between Baron Philippe de Rothschild of Chateau Mouton Rothschild and the famous Napa Valley wine producer Robert Mondavi. It is a Bordeaux blend, typically made from 82% Cabernet Sauvignon, 7% Cabernet Franc, 4% Merlot, 4% Petit Verdot and 3% Malbec. The first vintage released was 1979 (in 1984) and since then it has remained one of the most expensive, revered and iconic wines made in California. Following the sale of Mondavi to Constellation Brands, the Rothschild estate took control of the vineyard management and administration of the winery in 2004.

The vineyards are based in the Oakville AVA and consist of 170 acres, 100 acres of which are the prestigious “To Kalon” vineyard. Originally planted in 1868, To Kalon has historically been recognised as one of the very top vineyards in California and is the site for all of Robert Mondavi's top wines. In the October 2014 issue, Robert Parker’s Wine Advocate scored four different wines from this vineyard the perfect 100 point score (and dozens more over 95 points) cementing its reputation into legend.

The estate has a fanatical global following that makes each new vintage of tremendous interest around the world. The 2015 has received fantastic scores from Robert Parker’s Wine Advocate, James Suckling and Antonio Galloni, with scores ranging from 96-98+. The 2015 is due for release next week.

Another 2015 Super Tuscan to be released this month is the monolithic Masseto. In their own words, 2015 for Masseto was a “textbook vintage”. The weather behaved impeccably, producing a wine with the perfect degree of phenolic ripeness along with abundant yet soft and silky tannins. The Head Winemaker at Masseto, Axel Heinz, outlines how the marine influence was fundamental for the 2015 vintage, producing cool sea breezes and a magnified intensity of light, especially towards the end of day. Similarly the vineyard's blue clay soils provide the perfect balance of heat intensity by day and cooling influences at night to produce a wine with both power and elegance.

The vineyard was planted in 1984 following the advice from the legendary Russian-American wine consultant Andre Tchelistcheff (known for his pioneering work in Napa Valley through the 60s and 70s.) A lover of Merlot, he instantly identified the blue clay soils on the Masseto hill as ideal for Merlot, despite initially looking for sites to plant Cabernet Sauvignon. Merlot had never really been planted in Bolgheri and Lodovico Antinori (the owner of the property) was hesitant at first before following the advice from Tchelistcheff. It was clearly the right decision, providing Masseto with its unique identity and the most expensive Super Tuscan on the market. Steven Brook from Decanter suggests Masseto’s secret is “to marry the imposing character of a warm-climate Merlot with an intrinsically European finesse.”

The winery produces on average 30,000 bottles each year, with the first vintage being in 1987. Whilst originally owned by Antinori, the property was sold to Mondavi, before being bought by Frescobaldi. They also own the larger-site sister wine, Ornellaia (the Cabernet Sauvignon based Super Tuscan), situated on vineyards neighbouring Sassicaia.

Hommage is the top cuvee from the prestigious Southern Rhone producer Chateau Beaucastel. The wine is made in tiny quantities and only in the finest vintages. Whilst the Mourvedre variety plays a distinct role in all of Beaucastel’s Chateauneuf du Papes, in Hommage it can constitute up to 60% of the blend. The estate uses 13 different varietals in their cuvees but they are all vinified separately before being blended. Marc Perrin describes how each variety brings something different to the wine, the Granache and Cinsault bring warmth, colour and roundness. The Mourvedre, Syrah, Muscardin and Vaccarese provide structure, ageing abilities and colour. The Counoise and Picpoul provide body, freshness and very particular aromas. Amazingly the 2016 eclipsed the extraordinary 2015 vintage in the Southern Rhone and Hommage a J. Perrin 2016 is another cuvee that is potentially the best ever made at the estate.

This historic winery remains a family affair, headed up by Jacques Perrin’s sons, Jean-Pierre and Francois. The fifth generation - Marc, Pierre, Thomas, Cecile, Charles, Mathieu and Cesar - also all work at the estate. The estate was one of the first in Southern Rhone to become organic (in 1950) and then biodynamic (in 1974).

The property has vineyards covering 150 hectares, of which 100 are planted with vines. The remaining 30 hectares are farmed with rotated crops – every year, 1-2 hectares of vines are ploughed up and the equivalent replanted. Despite these large holdings only a miniscule proportion is used to produce the Hommage a J. Perrin. Many critics believe that Hommage is one of the most age-worthy wines in Chateauneuf du Pape.

The undisputed finest sweet wine in the world, Chateau d'Yquem, is also released this month. Ideally situated at the highest elevation in Sauternes, its location provides the perfect conditions for noble rot, producing wines of exceptional quality every year with an extraordinary ageing potential of 100 years plus. Unlike most of Bordeaux, Yquem does not release its wine during the En Primeur campaign of previous vintage, instead they release the finished wine 18 months later. A compelling reason to buy Yquem on release is to be able to buy in alternative formats to the standard 75cl bottles. These are filled to order and so are always rare on the market once the wine is physical; if you’d like to guarantee owning them in the size of your choice, now is the time... 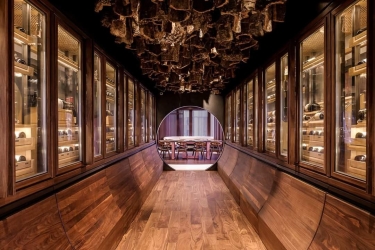