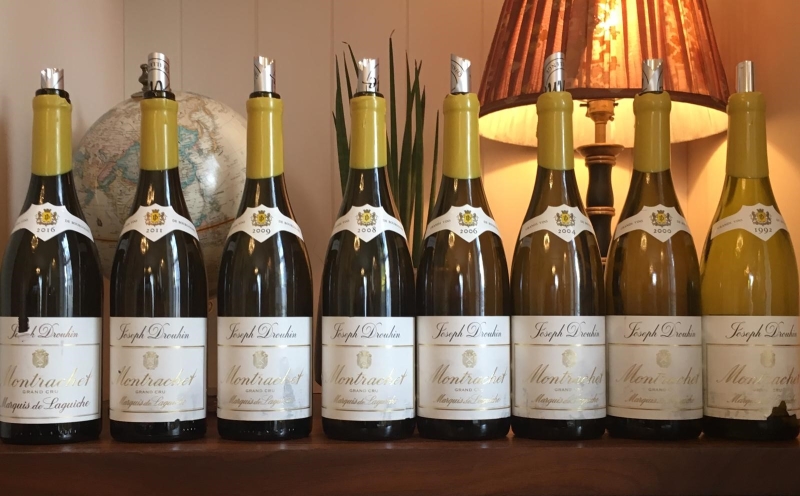 The Drouhin-Laguiche relationship has borne beautiful fruit since the fortuitous meeting of Maurice Drouhin and the Marquis de Laguiche during the Second World War; when they met, became friends and decided to combine the Marquis’ ownership of a prime piece of the already celebrated Montrachet Grand Cru and Maurice’s skills as a négociant. Maurice bought two barrels in 1943 and the relationship has flourished ever since.

The Laguiche family remain the single largest holder of Montrachet hectarage, amongst a total of 16 growers. They now own 25% of the land (down from 50% previously) with 2.06 ha of a total of 8 ha, with five separate south-east facing plots in the very eastern Puligny side of the Grand Cru, reaching from Chevalier Montrachet in the north to Batard Montrachet in the south.

These days, Philippe Drouhin, the youngest of the triumvirate of Drouhin siblings in charge of the domain, and its vineyard manager, works closely with the eldest son of the Laguiche family. The Drouhins are very much in charge of essential decisions in the vineyards, such as deciding on which dates to harvest.

In a vertical tasting hosted by Head Winemaker Veronique Drouhin, we were given the chance to taste seven vintages, dating from 1992 to 2016. With refreshing candour and spontaneity (Veronique had not recently tasted many of the vintages on offer), it was a joint exploration and discovery, with more than a few surprises along the way...

First up was the 2016 – a vintage still very much in memory as fraught by hail and extremely reduced yields – so much so that six producers, including Lafon and DRC, ended up combining their barrels of Montrachet. However, an excellent August and September, with heat spikes followed by rain helping to keep the vines from shutting down, resulted in excellent ripeness and freshness, though not with particularly high acidity in the final wines.

On tasting, the 2016 displayed generous lashings of ripe peaches and citrus peel, smoke and ginger spice, accompanied by nevertheless super fresh acidity, and a very mineral and saline finish.

Whilst not a standout vintage for reds, 2011 should be for whites, with a warm spring and a pretty cool summer. Veronique remembers the earliest harvest in history this year.

The 2011 was, at this point, speaking more aromatically than the 2016, very open with nutty aromas, apricot, and quince; on the palate, salinity, sweet spice and creamy leesiness, with soft acid and an elegant full-flavoured finish. With time in glass the smokiness became more pronounced.

2009 was an easy vintage, with ideal conditions and generous yields. Veronique pointed out that every vintage in history ending in a nine, except for 1939, has been a great Burgundy vintage. Fingers crossed for 2019…

Fleshy, ripe fruit, super powerful palate with lush, creamy notes but with focused intensity and great acidity. Still some oak perceptible on the nose, but beautifully meddled into the spice and fruit.

2008 saw unstable conditions, except at harvest, which saved the vintage and produced high levels of acidity in small berries and a small crop. For Veronique, the 2007s and 2008s are what she is drinking now.

2006 was a challenging vintage and nosing the 2006 Montrachet we were immediately faced with a much more developed wine. Deep gold in colour, very nutty and marmalade-driven aromas. This led to a very open and frank conversation with Veronique around premox and whether this was a concern for the domaine. Certainly, they have experienced it, especially the 1996 vintage, which suffered much too soon.

However, the 2006, 12 years on, still gave so much pleasure on the palate, with air those developed characters turned to gorgeous caramel and chocolate, and whilst this was certainly the effect of age, who’s to say it’s premature when it is this good? Granted, it may not live forever, but it is beautiful right now.

The 2004 vintage also had its challenges – famously the reds suffered from what has been described as ladybird taint. None of that here.

The 2004 was an absolute revelation. An exotic nose that was so alive and young, fresh grapefruit, pineapple and lemon, beautifully floral, herbal and smokey, so enveloping and all so integrated. Ginger spice giving a richness, but all so fresh and in a fabulous moment. Pure elegance. We were suddenly drinking a much younger wine than not only the 2006, but even the 2008.

2000 saw a mild winter and a warm May and June. This was another surprisingly youthful wine, and perhaps was at this moment in time a little less expressive than the 2004.

A honeyed nose, some hazelnut and dried apricots. With air the nose became more savoury and saline, and really very appealing. On the palate this had beautiful fresh acidity, and very clean young fresh apple finish.

Finally, the 1992, which Veronique remembers as a very good vintage for white Burgundy, that gave a large crop.

Beautiful russet apple, quince, hazelnut and praline, truffle, with a mineral and saline backbone still holding it together fabulously. This is fantastic and powerful and a real privilege to taste.