Louis Jadot is arguably the most consistent negociant house in Burgundy. A company that has managed to straddle both the entry level and fine wine market, whilst retaining respect in both. At the entry level, they offer tremendous consistency at a price point rarely found in Burgundy. At the top end, with their Premier Cru and Grand Cru sites, their wines sit comfortably alongside other top producers of these ‘hallowed ground’ sites. Tasting through just a portion of their vast range of over 250 wines, it never fails to impress how they retain the varied terroirs of each of the wines they produce and, at the top end, produce real ‘wow-factor’ wines.

For Frederic the brightness in the weather proved to be the hallmark of the vintage, with remarkable levels of sunshine prevailing from April through to September. This meant that flowering occurred in ideal conditions over the course of a few days towards the end of May/beginning of June, promising homogenous ripening.

Veraison kicked off during the early part of July and lasted for nearly six weeks. This unusual extension was caused by the high summer temperatures and the lack of water in certain appellations (Mâconnais, Chablis).

This meant that ripening was a long, slow process and by the end of August, the berries were still fairly firm and the skins were thick. During vineyard visits at the end of August, Frederic states “we saw that the grapes were in a near-perfect state of health and that yields promised to be generous for both reds and whites. Skins were thick and it was important to give them the time necessary to ripen fully. Luckily the weather forecast allowed us to do so with confidence.”

They began picking right at the end of August (Thursday 29/08), with the first bunches harvested from some early ripening parcels in Volnay, Meursault and then Beaune. These areas had ripened ahead of schedule, and the Pinot was right at the end of its maturation cycle.

Each year, F+R works directly with Louis Jadot to select single casks that we can offer exclusively to our customers. This year for the Burgundy En Primeur 2018 we are thrilled to offer both a selection of whites and one red cuvee from three of the most exciting sites in the Cote d’Or.

The Gouttes d’Or translates as the “drops of gold” and consists of a gentle slope, located between 230 and 360 metres above sea level at the most northern run of premier cru sites neighbouring Le Porusot and Les Boucheres to the south and the village vineyard of Les Grands Charrons to the north.

The terroir has particularly shallow calcerous soils with white marl that is very stony producing an aroma profile that is typically spicy, allied with white flower notes. Despite the thin top soil Sigfried Pic from Louis Jadot describes the Gouttes d’Or as the creamiest and roundest of the Meursault Premier Crus, stating: “it is really the perfect example of what people think Meursault should be, rich and creamy.” Due to the east facing exposition the vineyard enjoys a lot of sunshine bringing concentration to the wine.

Jasper Morris outlines that the vineyard has in fact a historic reputation for quality with Thomas Jefferson singling it out as his favourite in Meursault.

The grapes were hand harvested and collected in small containers to preserve the integrity of the fruit. The grapes are then pressed gently and fermented in the barrels from Jadot's own cooperage, a third of which are new. The ageing lasts 15 months on it lees before bottling.

Very open and flamboyant on the nose – aromas of fresh cream and jasmine, exotic and mature orchard fruits. Palate is beautifully pure and vibrant. Full bodied, yet the richness perfectly balanced by fresh stone fruit and a sense of energy. Layers of flavour on the finish. Gorgeous.

Incredible nose which seems to offer all ends of the aroma spectrum – marzipan and intense mineral, fresh lime and ripe pears, a hint of honeysuckle. A real sense of energy on the palate. Vibrant minerality and razor sharp acidity with fresh citrus flavours, which gently relax on the long, mouthwatering finish. This could very easily be mistaken for a top Puligny from a domaine which commands much higher prices. Superb.

Au Closeau is one of those beautifully positioned vineyards, nestled underneath one of the top Grand Cru sites in the Cote d’Or. It sits directly under Mazis-Chambertin Grand Cru, 280 metres up the hillside, on rocky clay soils. This single site cuvee provides close to Grand Cru quality at a fraction of the price, representing one of the best value Premier Cru sites available on the market.

A single expression of this site is a rarity even for Burgundy, since most producers’ land holdings in this vineyard are too small to be able to bottle under one cuvee. As far as we are aware, only one other producer bottles their wine as single vineyard, providing only two authentic insights into the terroir of this well-positioned site.

Even Louis Jadot’s plots on this site is extremely small. According to Sigfried the profile if Au Closeau is very pure, intense and generous Gevrey with a lot of fruit intensity.

“So delicate on the nose, the Gevrey Au Closeau is one of the most elegant wines in this lineup. There’s a softness to it, and the purity of fruit is just astonishing. The finish is supple yet quite fleshy belying the backbone underneath. Very approachable, this should please impatient drinkers that are waiting for their Mazis to open-up!”

We will be releasing the first of our three single casks from Louis Jadot in the next few weeks. Watch this space. 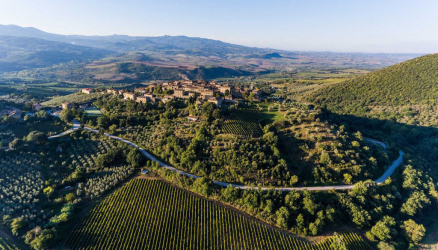