EditorialwinesKrug 2002: One of the most exciting releases of the decade

Krug 2002: One of the most exciting releases of the decade 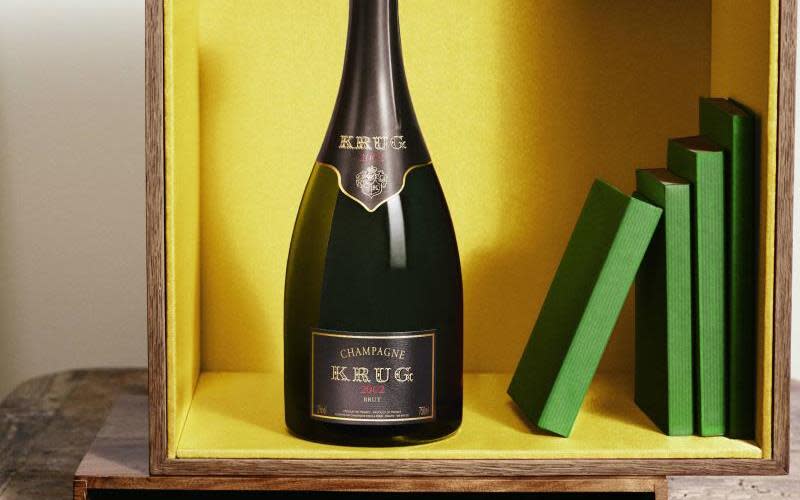 For those of you who have been champing at the bit for the release of Krug 2002, one of the greatest vintages from the King of Champagne, the long wait is almost over. We've now tasted it and can confirm that it is unequivocally worth all of the hype. But, as supply will be extremely limited and demand unimaginably high, you'll have to be quick...

For anyone who loves top end Champagne, this is the moment you've been waiting for. The release of Krug 2002 has been held back and held back, causing anticipation to rise to an almost unbearable level. But the long-awaited Krug 2002 will be released, after 14 years in their cellar, on 1 February 2016.

The first Krug vintage of the new millennium and hailing from one of Champagne's greatest ever vintages, this highly sought-after, miniscule allocation wine is already generating an enormous (and well-warranted) buzz.

An expert blend of 40% Pinot Noir, 39% Chardonnay and 21% Pinot Meunier, the Krug 2002 has been called an “Ode to Nature” due to its expressive, generous and rich fruit.

Krug’s Cellar Master Eric Lebel, who has likened his “muscular” and “assertive” creation to “a purebred stallion”, said of the 2002 vintage that: “It was a magnificent year and delivered everything you’d want in terms of sun and heat. There were no problems with hail or frost; the circumstances were close to perfect.”

Krug 2002 will be released on 1 February 2016 and prices have yet to be set. Demand will be fierce, and is sure to outstrip supply. Therefore, initial allocations are likely to sell rapidly. Further allocations and wines from the secondary market will become available at a later date, but the price is likely to increase. If you are interested in this wine, let us know via the registration link below…

Registering your interest will ensure that we are actively seeking this wine soon to be legendary wine for you and we will do our best to offer you an allocation.

The eagle-eyed amongst you will have noticed that the 2003 vintage was released ahead of the 2002. This was because the 2002 showed such immense ageing potential. Michael Edwards suggested a drinking window of 2018-2050. Eric Lebel believes that its freshness, energy and intensity will see it continue to improve and evolve “for a long time.” And here at FINE+RARE we fully expect whatever is not consumed immediately to be fought over for decades to come.

In his review for Decanter Magazine Micheal Edwards said:

“The Krug 2002 vintage Champagne is a mix of bright Welsh gold and pale green lights and has a perfect flow of tiny bubbles. What aromatics – spring flowers from well-sited Pinot Meunier, and exoticism in the Chardonnay. The beating heart of the wine is powerful, poised and very complex Pinot Noir, still biding its time to majestically unfold. Magnificent.”

Craig Norton, FINE+RARE’s Head of Sales, and Hannah Blair, buyer at FINE+RARE, were both invited to the Krug 2002 launch in Shoreditch on Monday 11 January. Both testified that it was well worth the wait. Craig waxed lyrical afterwards:

“Lemony, warm golden straw colour. Flecks of lime green. Spirals of fine bubbles. Very pure and delicate on the nose, melted butter, brioche, slight toasty note but subtle. Caramelised baked apple. Pastry. Touch of smoke. Amazing intensity, rich, but pure, restrained, understated. Freshly roasted pinenuts, touch of salinity. Vibrant, nervy minerality. Classy, elegant, not overdone like the 03, everything in perfect harmony and working together. Beautifully weighted, mouth coating, soft, delicate. Hint of vanilla caramel on the finish. This is a special wine in its infancy, loaded with potential. Has absolutely everything in abundance. Fascinating. Stunning Champagne. One of the most exciting releases of the decade.”

Krug recommend pairing the wine with the music of Gregory Porter and duck breast, roasted butternut squash, cinnamon brioche, orange tiramisu or, unusually, a dhal curry. They describe the experience as follows:

“At first sight a lovely bright golden colour. A very charismatic fresh nose, promise of natural intensity and elegance with strong presence of fruits, fruits of all types. A diverse bouquet of orange aromas with some notes of liquorice and light chocolate biscuit can be enjoyed. On the palate, astonishing, balanced and delicate with significant fresh, tropical, wild and crystalised fruits. It is a hymn to fruit: red, white and citrus fruit with notes of cassis, chocolate, candied-orange peel, cocoa beans, honey with hints of smoke and toast enhanced by a vibrant, persistent long finish.”

2002 provided near-perfect conditions for Champagne and stands up to great vintages such as 1990 and 1996. It has been described as the vintage of decade and has almost become a brand in its own right. So couple that with the strength of Krug's reputation and this new release will be a sure-fire winner for Champagne connoisseurs. Jancis Robinson describes 2002 as: “A magnificent vintage for Champagne.” Wine Advocate goes even further by saying: “2002 was an outstanding vintage, most likely the best of the decade. The finest 2002s are powerful, firmly structured and truly mineral but neither lack freshness nor finesse.”

So if you aren’t one of the lucky few to get their hands on the Krug 2002, all is not lost. As many have been waiting for Krug's release, there are many alternatives still in the market from this fabulous vintage. Take for example Taittinger Comtes de Champagne 2002, which Antonio Galloni ranks as "one of the greatest Champagnes ever made." Or alternatively, we'd highly recommend the incredible Salon Le Mesnil 2002, which received 99 points from James Suckling and was described as “utterly mesmerising” by Antonio Galloni, or Bollinger R.D. 2002, which also received 99 points from James Suckling and Antonio Galloni called it “super-finessed” and “impossible to resist”.

Krug is unquestionably now one of the most famous Champagnes in the world, but the house’s history begins in 1800 with the birth of Joseph Krug, a butcher’s son from Mainz, Germany. Joseph moved to France at the age of 24 and was employed as an accountant by Champagne Jacquesson shortly after. In the eight years he spent at Jacquesson he quickly rose to partner and pushed his role beyond simply accountancy, travelling around Europe gathering feedback from the market and even blending a little Champagne himself. In 1943, at the age of 42 – when most would have been thinking about retirement – he set up Krug & Compagnie with the modus operandi of creating the very best Champagne every year regardless of vintage variations. Joseph recognised the importance of terroir and his teaching of plot to plot tasting has been passed down through six generations of Krugs, from his son Paul all the way to Olivier who is one of the five permanent members of the house’s tasting committee today. Browse our full range of Krug here.

Why not browse our other spectacular champagnes from the 2002 vintage?