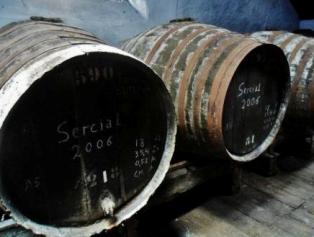 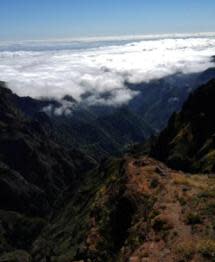 That’s Madeira the fortified wine favoured by none other than Thomas Jefferson, who used it to toast the Declaration of Independence; George Washington, Benjamin Franklin and John Adams to name a few, oh, and it was the drink of choice to christen the USS Constitution in 1797! Actually Madeira the island is pretty amazing too. A volcanic island sitting between the Portuguese and West African coast, where the mix of sea air and sunshine seems to create an enchanting atmosphere of dense cloud that rises and falls throughout the day. In the morning you might find yourself below a dense pillow of white candy-floss, but drive up the hill a few thousand feet (a much more pleasant experience than you might imagine) and you are standing above the clouds, looking up to the clear blue sky and the ether that is beyond, and looking down somewhat authoritatively on the world. What could be better? Perhaps a glass of medium-sweet Madeira in one hand and a little dark chocolate in the other? Yes please! 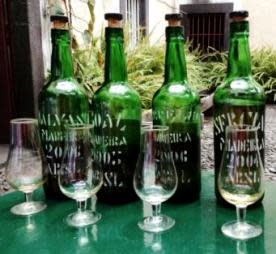 As well as the majestic atmosphere, Madeira’s strategic position gave rise, apparently accidentally, to this almost painfully complex, delicious, decadent wine. Back in the 16th century Madeira was an important port for wines being transported on ships to the New World and the East Indies. In order for them to be drinkable at their destination, they were fortified with alcohol (made from sugar cane juice which is grown widely on Madeira). This, together with the tropical heat and constant movement, baked the wine over time, developing complex flavours of caramel, toffee, molasses and raisins. In the present day, wine made from the classic grapes: Sercial, Verdelho, Boal and Malmsey, are heated up to 55 degrees centigrade for a few months to create a fortified wine ranging from dry to sweet using the ‘estufagem’ process. However, a wee pre-holiday research led me to a little, rather hidden gem in Funchal – Artur de Barros e Sousa - the last Madeira producer to use the traditional ‘canteiro’ method of ageing where casks mature in special rooms (estufas), or on trestles in the winery where the heat of the island sun naturally matures and concentrates the wine. After the intoxicating smells of old casks and a quick tour by fourth generation brothers of the founder, we sat in the tiny courtyard with vines above to sample their delights.

The driest Madeira is made from Sercial grapes that produce a crisp, citric refreshing style which Jancis Robinson describes as “…Racy with that wonderful purity and acidity, yet heady and with massive depth of fruit. Tense, serious, complex.” It is a beautifully elegant and refined expression of Madeira that would make a perfect aperitif. Now for more poetry, Neal Martin writes that a 1980 Verdelho “…has an elegant, refined bouquet that is pure and seductive. It offers precise aromas of orange peel, tangerine, dried honey and wax resin with great delineation…It builds nicely in the mouth with tangy, oxidative notes that are perfectly in tune with the sweetness.” This goes to show how well Madeira ages. And for my favourite – Boal (medium-sweet) - A glass of this takes you on a heady journey of intense baked peach, apricot and spice, grounded with rich dark chocolate, walnut, smoky molasses and raisin flavours, all balanced with a hit of acidity. Indeed, Neal Martin urges you to “Imagine a Minotaur dancing to Swan Lake” in order to imagine the impressive 1978 Barbeito Boal Fasqueira! Finally the sweetest of them all – Malmsey – where the flavours develop into dried fruits with toffee, molasses and Asian spices, while still retaining the balancing acidity, body and impressive length that is so satisfying. Malmsey will put you in a dreamy state of serenity where any problem melts away into the sweet nectar.

I urge you all to find the Madeira style that suits you and enjoy its majestic, complex, deeply satisfying flavours. Let’s hope Madeira will once again step regally into the limelight, as it did in the 18th century, to enjoy a second ‘golden age’, because it is certainly well deserved and long overdue.