EditorialwinesItalian Icons to be released via La Place de Bordeaux

Italian Icons to be released via La Place de Bordeaux

In 2004, the historic wine trading and distribution network 'La Place de Bordeaux' broke with tradition by listing Opus One, selling for the first time a wine from outside of Bordeaux. With the international sales success of Opus One, a number of fine wine icons from around the world have since followed suit creating a September campaign of releases coming through “La Place”. F+R explores the recent additions of Italian Icons that are now using 'La Place' as a global route to market including the wines of Bibi Graetz, Galtrona and Caiarossa.

This is briefly how it works: wines are sold from the Chateau to Bordeaux Negociants (via a Courtier) before being sold on to individual wine merchants, and then subsequently on to the consumer. This is a historic trading system originating from the Middle Ages. Originally, aristocratic owners of Chateaux did not want to deal directly with the merchant classes and therefore used courtiers who would act as the go between from the Chateaux and the negociants.

Whilst times have changed somewhat – many of the aristocrats have been replaced by banks and insurance companies – the system remains in place. La Place de Bordeaux’s antiquated distribution system is often seen in the contemporary wine scene as outdated and cumbersome, however Bordeaux’s historic and established route to market has become an attractive approach for other fine wine estates from outside of Bordeaux.

Following the spring Bordeaux En Primeur Campaign, these early weeks in September are becoming known in the fine wine world as the second most important time in the year for a number of Bordeaux negociants. This is because “La Place” has become the go-to place to source new releases of top wines from Napa, Chile, Argentina as well as Italy’s Super Tuscans. Just this week we have seen the releases of: Solaia, Opus One, Masseto, Clos Apalta and Almaviva all exclusively released via the Bordeaux Place. In many ways, it seems no surprise since the Super Tuscans, Napa and much of South America’s top wines are “Bordeaux blends”. If anyone knows how to sell Cabernet and Merlot based red blends, it is the Bordeaux negociants. But rather than the varietals, it is the established distribution network these historic negociants have built up over the years that make them so appealing to other fine wine producers.

For fine wine producers with very little infrastructure in terms of marketing and distribution, selling their wine through the Place de Bordeaux has been the perfect place to sell their wines. As the wine is released on to the market via La Place, within hours, the wine would have been offered to thousands of merchants reaching millions of customers almost immediately. For a single winery to invest in reaching that sort of volume of potential customers so quickly, would simply not be financially feasible and therefore becomes a huge asset to these fine wine producers.

Colore is the top wine from Bibi Graetz, sourced from some of the oldest vineyards in Tuscany. The wine is a blend of indigenous varietals (predominantly Sangiovese as well as small proportions of Canaiolo and Colorino). According to Graetz the Colorino brings fruit and velvety tannins, the Canaiolo minerality and intensity, whilst the Sangiovese represents the structure and power of the wine. The wine comes from 3 separate vineyards with very distinct personality traits. The Lamole vineyard is situated at 620 metres and has vines aged 80 years and older, producing small clusters of tiny berries. The Vincigliata vineyard was the original vineyard of Colore situated at 300 metres altitude with soils dominated by clay and the Galestro rocks typical of the Chianti Classico region, whilst the Sienna vineyard grown on more fertile soils, high in siliceous stone bring power and structure to the wines.

Testamatta is 100% sangiovese red wine originating from 5 separate vineyards in the Chianti region of Tuscany. All the vines are over 50 years of age. The wine is often classified as a “Super Tuscan” despite being made from the indigenous sangiovese. This is largely because the qualitative approach taken to make Testamatta and Colore has more in common with the approach most closely associated with the Super Tuscans. Bibi Graetz harvests each of these vineyards up to 8 separate times – picking the bunches only when they are at their perfect level of ripeness.

Galatrona is Petrole’s flagship wine made from 100% merlot grown in the Valdarno di Sopra DOC. Valdarna is a sub-zone of the wider Chianti region that dropped its Chianti association to allow for a number of top wineries to make wines from international varieties (Super Tuscans) – such as Galatrona, whilst remaining under DOC status. This sub region has a long history of producing some of Tuscany’s finest wines with the region classified back to the early 1700s. The Valdarno di Sopra DOC however is one of the most recent, coming into operation in the 1960s. The DOC allows for Chardonnay, Sauvignon Blanc, Cabernet Sauvignon, Cabernet Franc, Merlot, Syrah and the indigenous Sangiovese to made under the in appellation.

Galatrona is grown exclusively on a 10-hectare plot planted at various times in the 1990s. Similar to the benefits of Pomerol, the merlot benefits from a high content of clay in the soil keeping moisture in the soil over the long dry Tuscan summer.

Caiarossa is unsurprisingly sold via La Place in Bordeaux because it is owned by Eric Albada Jelgersma who also owns Chateau Giscours and Chateau du Tertre in Bordeaux. First produced in 2003 the Caiarossa is a “Super Tuscan” blend of international varietals (Cabernet Franc, Merlot, Cabernet Sauvignon, Petit Verdot, Syrah and Sangiovese) grown on the Tuscan coast located in Val di Cecina, north of Bolgheri. The property is 100% biodynamic.

The properties qualitative approach allied with some exceptional vintages in the region has seen a real upswing in the quality of this top cuvee over the last few vintages, becoming one of the regions most consistent Super Tuscans. 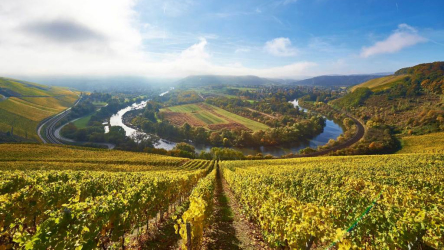