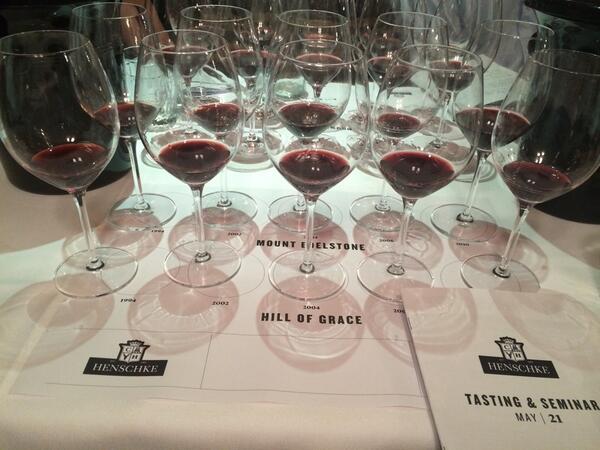 **A couple of weeks ago I was accompanied by Private Client Sales Account Managers Simon Brewster and David Massarella, to a tasting and seminar on exceptional Australian Shiraz, hosted by Stephen and Prue Henschke.  The delicate fruit aromas that filled the arched, cellar-like room in Hawkesmoor, Spitalfields ignited an anticipation for the brilliant wines that were to come.

A Short History of Henschke Henschke are one of the founding members of Australia’s First Families of Wine – a unique initiative to showcase Australia’s heritage, passion and winemaking skill to the world. We delved deeply into the family’s long connection to these Barossa vineyards from their initial settlement in 1841; the history that has created what Henschke is today could rival that of many ‘old world’ wines.

The family originally produced fortified wines for export that would have the ability to survive the long voyage to Europe. It was not until the middle of the 20th Century with the influx of Greek and Italian immigrants that Henschke moved away from this. The new residents of Barossa sought wines to complement their native cuisines and Stephen’s father Cyril, had the answer: during the 1950s he pioneered the now infamous single vineyard wines of the Eden Valley.

Prue commenced her role as viticulturist in 1987. She introduced organic and biodynamic methods to ensure the sustainability of the vineyards. Her passion for the land that she nurtures is captivating; the intricate details of these procedures have truly made Henschke a leader in this field.  Biodynamic viticulture focuses on working with the local natural environment and nature’s cycles, allowing Henschke to utilise natural alternatives to the energy-intensive fertilisers and pesticides to protect and enrich the land.

The Hill of Grace and Mount Edelstone vineyards boast the oldest Shiraz vines in the world, originally being planted in the late 19th Century from pre-phylloxera cuttings shipped over from Europe.

Mount Edelstone Shiraz The Mount Edelstone vineyard was acquired by the Henschke family in 1952 and boasts the title of the oldest single vineyard wine in Australia (as far as they know). The name is a translation from the German Edelstein, meaning gemstone. The 16ha vineyard is situated at an altitude of 400m with an easterly aspect, preventing direct exposure to the the afternoon sun, enabling the grapes to mature slowly. This produces elegant wines with notes of blueberries, dark plums, blackberries, black pepper, crushed bay leaves and sage.

We commenced the tasting with the 1994 Mount Edelstone Shiraz, which was easily the standout vintage of the tasting. An utterly exquisite wine with huge depth and complexity that opened up to reveal further nuances of leather, prunes and a finish that seemed to go on forever.

Moving on to the 2002, 2004 and 2006 vintages, these were wines with such delicacy and notes of fruit and spice creating deep and complex wines with excellent length.

The final Mount Edelstone we sampled was the 2010, which perfectly exhibited the early stages of development with an intensely perfumed nose of dark fruits and crushed Sage leaves. All the components were present for this to develop beautifully in the bottle.

Hill of Grace Next we moved onto the infamous Hill of Grace. The 8ha vineyard, again, sits at an altitude of 400m with north-east facing slopes. It was acquired by the Henschke family in 1951 and had its inaugural vintage in 1958.

The Hill of Grace is a deep, dark, brooding wine full of dark plum and blackcurrant, complimented by notes of exotic spice and cedar. The 1994 exhibited the longevity that these wines have to offer, with more delicate fruit flavours and an added complexity.

We then skipped almost a decade to 2002: a standout vintage according to Stephen Henschke and also his father’s favourite wine. What's clear here is that the cool season has graced this wine with a majestic quality and a stunning complexity.

The 2004 was the least memorable of the line-up, but by no means lacking the quality expected of these wines; in fact it is given 96 points by the Wine Advocate, but just didn’t quite have the complexity found in the other wines. The high-scoring 2006 delighted us with a highly perfumed bouquet common throughout Australian Shiraz from this vintage.

We finished the tasting with the 2008 Hill of Grace, representing the 50th vintage of this wine. Stephen described a recent tasting of the 1958 and 2008, referring to them as the 'bookends', encompassing the wines development from Cyril’s first production.

It is clear to see why these wines have been so well received throughout the world, but after falling for the entire Mount Edelstone range, the Hill of Grace seemed somewhat of a disappointment. In fact, overall the Mount Edelstone range outshone the Hill of Grace in every vintage; in our opinion these wines live up to their namesake and truly are the gemstones of Henschke.

To view our current listings of Henschke, please click here.