EditorialwinesDarioush: From the historic Iranian winemaking city of Shiraz to California dreamin’

Darioush: From the historic Iranian winemaking city of Shiraz to California dreamin’

“Chose the cup bearer and the wine. Drink. Sing like the starling or the nightingale". (Rudaki, Persian poet, 858-941 AD)

Owner Darioush Khaledi is an extraordinary figure in today’s world of wine. Born and raised in the historical wine producing city of Shiraz in Iran, winemaking was instilled in him by his father at an early age. The historic city of Shiraz is known as the city of poets, literature and wine and these rich cultural and winemaking roots have continued to fascinate him throughout his life. 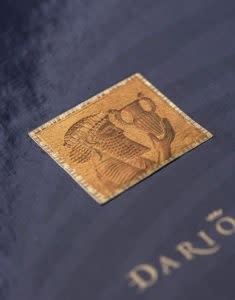 Archaeological studies in 1968 discovered ancient clay jars in the Zagros Mountains of Northern Iran that date back to the Neolithic period over 7000 years ago. Chemical analysis of the stains in the jars were found to be wine residue, and provided the first scientific proof of wine production in ancient Iran and the oldest recorded in the world. Evidence shows the first examples of wine cultivation and the art of winemaking descended from the mountains to the city of Shiraz around 2500 BC. As a comparison, the earliest proof of winemaking in France dates back to 500 BC.

Whilst this cements Iran’s historical association with winemaking, the grape variety it shares its name with, the variety Shiraz (or Syrah as it is known outside of Australia) does not in fact originate from the city of Shiraz. Until recent DNA testing of the varietal in 1998, legend had it that the Syrah vine originated from Ancient Persia and was first planted on the Hermitage Hill in the Rhone Valley in the 13th century by a knight called Gaspard de Sterimberg returning back from the Crusades. Following the DNA testing it turned out in fact to be a crossing of varieties local to the Rhone Valley.

Winemaking continued to be a key industry in ancient Persian / Iranian history right up until the Islamic Revolution in 1979. At the time of the revolution there were around 300 wineries in operation. Alcohol was banned by the new Iranian leaders after the revolution. The wineries were shut down, the commercial vineyards were ripped up and many of the top sites were reduced to growing table grapes, as remains the case today. 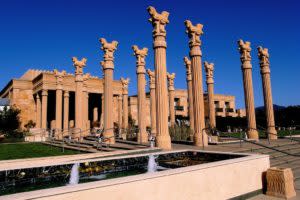 In 1977, Darioush emigrated to the US to pursue his ambitions as an entrepreneur and his dream to one day return to winemaking. Darioush's first successful entrepreneurial project was in the 1960s and 70s, working in construction in pre-revolutionary Iran. He escaped the corruption endemic in the country prior to the revolution and set out a new project from scratch in the US, buying a small failing supermarket in Compton, LA in the late 70s. Within 20 years he expanded to 44 supermarkets, also making a significant investment in LA real estate at a time when land was cheap. By the late 90s, after selling the supermarkets and capitalising on his investments, Darioush was finally in a position to return back to his heritage and his dream of making wine. 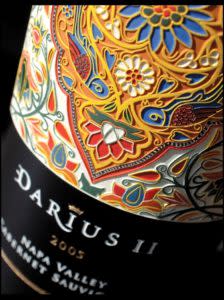 Darioush was always a big fan of Bordeaux but was drawn to the opportunities laid out in the West Coast of the US and so looked for vineyard sites where he could capitalise on the ripeness of Californian fruit whilst retaining cooler climate Bordeaux influences. A man whose life has been defined by radical changes was not afraid to go against the fashion of high octane, very ripe, highly extracted Californian Cabernets. Instead he chose to seek out a site in the cooler southern region of the Napa Valley AVA and more recently from the mountain site of Mount Veeder. Whilst this style is more in vogue these days, Darioush and his winemaker Steve Devitt, who has been making wine at Darioush since their inaugural vintage in 1997 and is now in his 46th vintage in Napa, have together let their personal style and tastes lead the way, rather than following what fashion dictates. As a result, the wines effortlessly combine brilliant Napa fruit with an elegantly restrained European sensibility.