Louis Jadot is arguably the most consistent negociant house in Burgundy. A company that has managed to straddle both the entry level and fine wine market, whilst retaining respect in both. At entry level, they offer tremendous consistency at a price point rarely found in Burgundy. At the top end, with their Premier Cru and Grand Cru sites, their wines sit comfortably alongside other top producers of these ‘hallowed ground’ sites.

Clos de Beze is one of the great Grand Cru Burgundy sites and one of the oldest. Frederic pointed out that grapes have been grown on the Clos de Beze site for the last 2000 years and is actually the first named single clos (walled) vineyard in Burgundy, pre-dating Clos Vougeot back to the 7th century. Amazingly the borders that demarcate the 15 hectares that make up the entirety of Clos de Beze have not changed since 630AD. 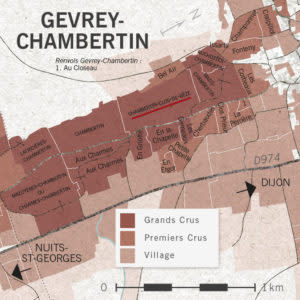 Whilst Louis Jadot has only owned vineyards in Clos de Beze since 1985 it continues to vinify its wine in the same way regardless of vintage. Jadot in fact makes each of its red wines in exactly the same way enabling the different terroir expressions to show through evenly, from village wines right through to Grand Crus. With such consistent and minimal intervention in the winemaking process, tasting a selection of vintages from 2015 to 1989 was a great insight into the characteristics of the sight and how it expresses the effects of each vintage.

An important point was raised by Frederic during the tasting about what defines a Grand Cru against a Premier Cru and Village wine. Of course the terroir, soil type etc. is an important element but a more generalized relevance perhaps even overshadows this, and that is reliability. The Grand Crus are the most reliable sites in the Cote d’Or in terms of reaching adequate ripeness levels even in lesser vintages. A worthy point when thinking about what wines to buy and the high variance in price between better and lesser vintages. 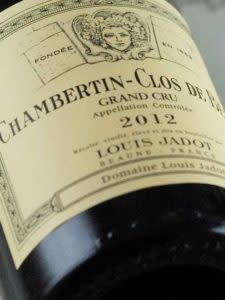 2015 – Whilst the final result has been declared by many as one of the great modern vintages for red wine in Burgundy, Frederic describes the growing season as anything but easy. Whilst ripeness was not hard to obtain, yields were down due to millerandage (shrinking of grapes due to problems at flowering – not necessarily a bad thing for flavour since it concentrates tannins and ripeness but yields are drastically reduced). Odium was also a real concern. Lots of hard work was required in the vineyard.

Highly perfumed with a slight confected sweetness to the fruit, still very much in a primary phase. The generosity of fruit is brilliantly balanced by great freshness and the tannins evenly set on the palate, with a nice stony minerality and power on the finish.

2014 – Defined by a hot Spring (Apr-June) followed by a poor summer, which slowed down the ripening of the grapes. By August there was concerns over botrytis and under ripeness but the vintage was saved by September which was not hot but very dry for 3 weeks leading up to harvest. View product here

Lovely aromas of redcurrants, black cherry and a wonderful earthy coolness which gives it a beguiling quality. Great textural finesse, a slight vinous flavour and great breadth on the palate. Exceptional.

2011 – Marked by a terrible July –lots of rain, grey skies. Early bloom and early harvest but the grapes lacked ripeness in many parts of the Cote d’Or.

Nutty, fresh almonds and fresh soil aromas. More earthy fruit and touch of tertiary undergrowth on the palate and more linear than the ‘14 and ‘15. Despite having less juiciness the hallmarks of power, intensity and complex aromatics are all still there and the wine remains very elegant. View product here

2009 – A straightforward growing season. High quantity and very little disease in the vineyard. It was a very generous year with tanks filled to the brim. It was a “perfect” growing season, perfect flowering and no sorting required at harvest. View product here

Ripe, juicy, plush and generous. Very fruit driven, the power and depth as well as intensity seems currently overshadowed by the ripe fruit but very elegant. Intensity and power will take over as the fruity elements develops (?)

The wine has great structural impact, good power and intensity. There is also a lovely level of ripeness of black cherry, and plenty of sappy dry extract. The wine remains fairly tightly wrapped. For Frederic this is typical of vintages which had a lack of water. He points out 1976 was similar and only just starting to drink now. I wonder how many 2005s will still be around after 40+ years. Requires patience!

Underwhelming against its counterparts. The wine compared to the 05 is distinctly watery and lacks concentration. There is lightness to the palate and even a slight sour taste. Fully developed tertiary aromas, touch meaty, vegetal and a bit lean.

The wine has a great combination of generosity of fruit at excellent level of ripeness and purity whilst retaining a vibrant refreshing acidity, giving the wine great intensity and power. The tannins are seamless producing a lovely elegant frame and there is a nice tertiary smokiness. Excellent.

1995 – A difficult vintage and another vintage with millerandage producing quite austere/ tannic reds, what Frederic describes as a “skins” vintage.

The wine has great power and concentration of earthy fruit and savoury undergrowth flavours. Still tannic but decent intensity and sappiness (with the elegance coming through) despite the austerity. “The power of the skins builds for decades” – for Frederic the top wines from 1995 are still too young and more patience is required.

Lovely aromatic complexity – exotic spice as well as developed soy aromas. The palate has great ripe, generous fruit density whilst a firm tannin framework holds the wine together very well. For Frederic this wine has barely moved with age and retains all the strength and intensity of a much younger wine. “You can still feel the effects of the sun and the quality of the grapes from the ’89 vintage”.

Darioush: From the historic Iranian winemaking city of Shiraz to California dreamin’