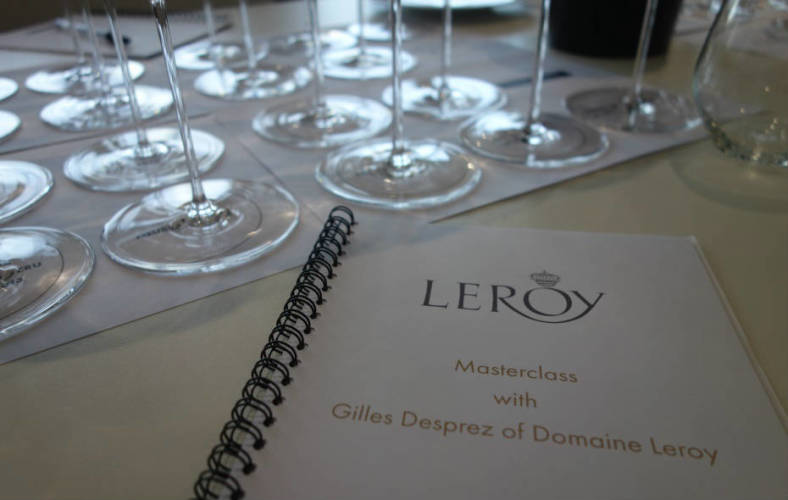 Many of London's top sommeliers gathered at FINE+RARE for a breakfast Leroy Masterclass. Find out more below... 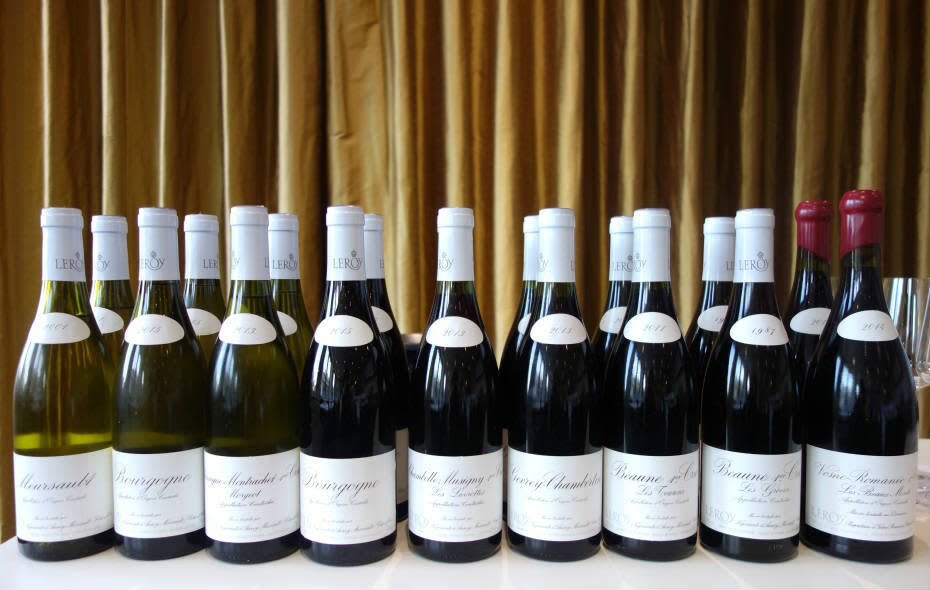 Just after breakfast on Tuesday 4 July FINE+RARE hosted a Leroy Masterclass for sommeliers of some of London’s finest restaurants and establishments. Read on to get a flavour of the proceedings…

While Domaine de la Romanée-Conti is virtually a household name, Leroy remains very much the intellectual property of those in the know.  Therefore, tasting the latter’s wines always feels like you are being inducted into a secret society. And that sense is further heightened when the Leroy tasting is attended by the sommeliers of London’s top restaurants: a tight global clique comprising some of the capital’s most knowledgeable wine experts. The excitement in our tasting room was palpable despite the early start and the glorious day outside, such is the allure of Leroy… 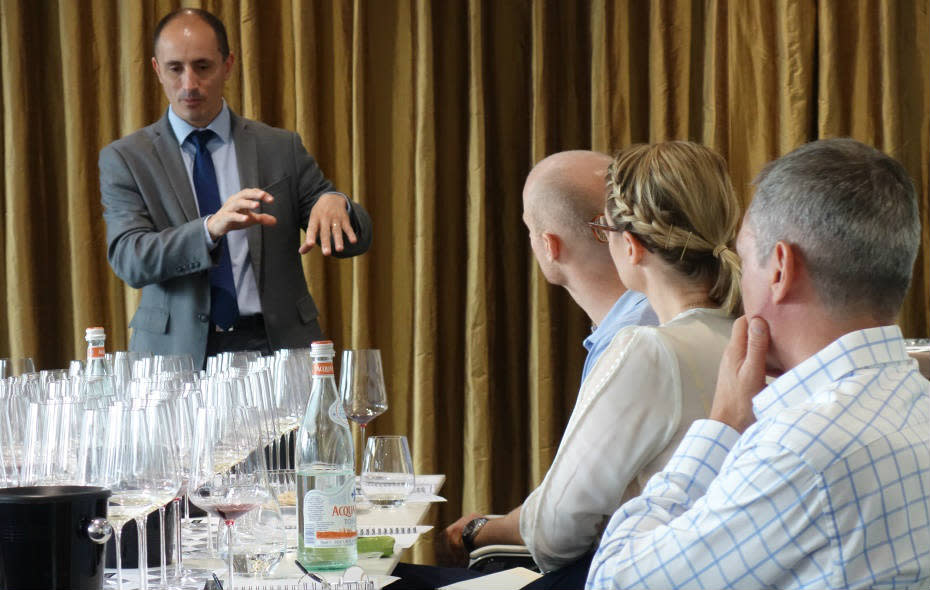 The tasting was hosted by Gilles Desprez, who headed up Leroy’s operation in the US for many years before returning to the domaine itself. Prior to that he was a sommelier himself at many prestigious establishments, including Louis XV in Monaco (where he replaced Frédéric Roemer who was also poached by Leroy for selling more of their wines through one hotel than the whole of Paris put together), Le Manoir aux Quat’Saisons in Oxford, L’Orangerie in Los Angeles and Jacques Maximin near Nice.

Despite working at one the most prestigious addresses in the world of fine wine and constantly brushing shoulders with the industry’s elite, Gilles is incredibly humble. During the tasting he admitted to always offering to help with the bottling at Domaine d’Auvenay, just on the off chance of managing to catch a quick taste of Leroy’s rare sister wines. He also points out that when talking about Leroy in the small village in Burgundy he lives in, the locals often look blankly at him; this super producer remains inexplicably under-the-radar even so close to home. This lack of pretention among Leroy’s staff may be down to the humbling character and status of the owner. When it comes to Lalou Bize-Leroy, Gilles points out respectfully that “if she says no, we don’t argue.”

Leroy is one of the most prestigious names in the whole of Burgundy. The hugely sought-after wines attract praise from every wine critic lucky enough to have tasted them, with Clive Coates MW calling Leroy “the greatest estate in Burgundy”.  Robert Parker agrees, saying of its owner that: “Lalou Bize-Leroy stands virtually alone at the top of Burgundy's quality hierarchy” adding “her wines embarrass much of what is produced in Burgundy.” Parker’s colleague Neal Martin describes Madame Bize-Leroy, who turned 85 last March, as “a one-off who truly deserves the title of legend” and Jancis Robinson calls her “Burgundy’s most celebrated vigneronne”.

FINE+RARE’s longstanding partnership with Leroy and our annual visit to the estate is a treasured fixture on the calendar. From first selling her wines in 1995 to our status today of receiving the largest direct allocation of any UK wine merchant, our journey with Leroy has been one of our proudest achievements.

Lalou Bize-Leroy began working for her father’s négociant Maison Leroy. Her destiny was obviously written in the stars as at birth her lips were wetted with Le Musigny 1929 and her first vintage was the legendary 1955. While working for her father, she developed an encyclopaedic knowledge of Burgundy’s terroir, on which the business’ incredible success has been built. Her father had secured 50% ownership of Domaine de la Romanée-Conti and this resulted in Lalou Bize-Leroy co-managing the incredible estate. Selling DRC’s wines allowed Leroy to build up an enviable back-vintage inventory of their own (their cellar now contains around 2 million bottles). Her departure from DRC in the 1990s has garnered much speculation (she still retains 25% shares), but what is undeniable is that by concentrating her attention on her businesses d’Auvenay and Leroy, she created serious competition in Burgundy and many of her innovations have been now been adopted by the region’s elite, including her former employer. But what is that makes her and her wines so special?

Leroy’s ethos is that the wines must have an identity that reflects where they come from and that is why they became one of the very first producers in the region to farm biodynamically. Achieving “identity” when you have complete control of the impressive holdings that Domaine Leroy and Domaine d’Auvenay have is maybe not so difficult. But when it comes to Maison Leroy, the négociant side of the business, it is a lot more challenging. And that is where Lalou Bize-Leroy’s phenomenal palate and knowledge of terroir come into play…

Courtiers present wines to Lalou Bize-Leroy, which she tastes blind, unlabelled and unpriced. With her incredible talent for tasting, she decides what the wine is, whether it displays sufficient “identity” and if the quality is high enough to stake her reputation and name on. Those that pass the test are always a delight to taste, whether they are Grand Cru or basic Bourgogne.

This brings us to another reason why Leroy is so special. The top wines rival the likes of Domaine de la Romanée-Conti, Pétrus and Le Pin, but they also offer entry level wines, something that few of their peers do. Although at the very pinnacle of Burgundy, Leroy remains accessible.

At the tasting we revisited the fabulous 2015 Bourgogne Blanc and Bourgogne Rouge. These wines are very reasonably priced when you consider where they come from. And they are of incredible quality. As Gilles puts it, these are “the calling card of the house”, so are viewed as the most important wines Leroy produces; despite being just Bourgogne they are viewed as the real flagships and are treated with that level of respect. The reception in the market has been testament to their quality; Leroy began selling the Bourgogne Rouge 2015 in January and had sold out at the winery by April. But don’t worry, FINE+RARE have secured a sizeable allocation of each. Both the 2015 Bourgogne Rouge and Blanc showed beautifully at the tasting and demonstrated the immense variety on offer…

As well as the fresh and wonderfully drinkable 2015s from a vintage that has been met with rave reviews, we also sampled the Beaune Greves Premier Cru from the challenging 1987 vintage, one that was rather brushed under the carpet by the sensational three years that followed.

Leroy releases its wines when deemed ready. This means that they give their fans access to not only crisp and youthful wines, but also fully mature and wonderfully developed back vintages. Holding back wines ensures not only excellent provenance, but also the unique opportunity to sample back-vintages that would have long since disappeared from other houses. As Gilles puts it: “not many people do what we do.”

What underpins every wine from Leroy is a sense of energy. Whether it is the latest outturn or a wine with thirty years under its belt, hot or cool vintage, they are all vibrant and alive. Maybe this comes from the fact that its octogenarian owner still goes rock climbing? These wines have real longevity, proven by a tasting in April 2015 of Leroy’s 1955 vintage, attended by Jancis Robinson, Antonio Galloni, Neal Martin, Matt Kramer, Bruce Sanderson, Michel Bettane, Jeannie Cho Lee and many more. Antonio Galloni noted that these sexagenarian wines were “now fully mature” and Jancis Robinson noted that each wine was “a peerless example of its appellation, and still going strong at 60 years old, like their guardian.” But don’t think that this vastly experienced producer is resting on her laurels; her own energy wouldn’t allow it…

One might assume that a business that has built the reputation that Leroy has, would be content. But far from it, this consummate bunch of perfectionist is always looking to improve. They divide their vineyards into grids testing on each section, removing copper use, using rhubarb leaves against fungus, comparing the difference between dried and fresh herb infusions, applying essential oils and analysing chips taken from vines using the Sensitive Crystallisation Method. Leroy shares learnings with the likes of Pontet Canet and pruning superstars Marco Simonit and Pierpaolo Sirch, always pushing the boundaries of the very traditional Burgundy region. On top of which, they also keep a careful eye on their neighbours, having vineyards spread throughout the region allows them to see who is spraying what and which vines look healthiest.

Rumours abound that Lalou Bize-Leroy is finishing off a book on her experiments, which is sure to be a big hit with not just her rivals but also the aspiring winemakers of the future…

During the tasting Gilles Desprez alluded to Burgundy’s well-documented aversion to change, but was positive that the “new generation is moving in right direction”, inspired in no small part by Leroy. Gilles’ bigger concern with regards to the future was climate change. Admitting that there were positive effects, they haven’t recorded what they consider a “bad vintage” since 2004 and believe that the wines are now more balanced than ever, but they do have more trouble with erratic weather. And when your plots are small and scattered as Leroy’s are and the storms, frost and hail come, Gilles says: “it is like I have ten children, which one do I save?”

Hopefully they can save them all, every time, as these wines are too special to waste a drop.

At the tasting guests were treated to the following:

Sommeliers attending described it as a “great way to start the day” and a “stunning Leroy masterclass”, and when asked how they found the wines, three responded simply: “amazing!” In the words of Gilles Desprez, to all that came “thank you for sharing breakfast with us”, we hope you enjoyed it.*

View all of the Leroy 2017 Releases here.

To browse all availability of Domaine d’Auvenay wines click here. 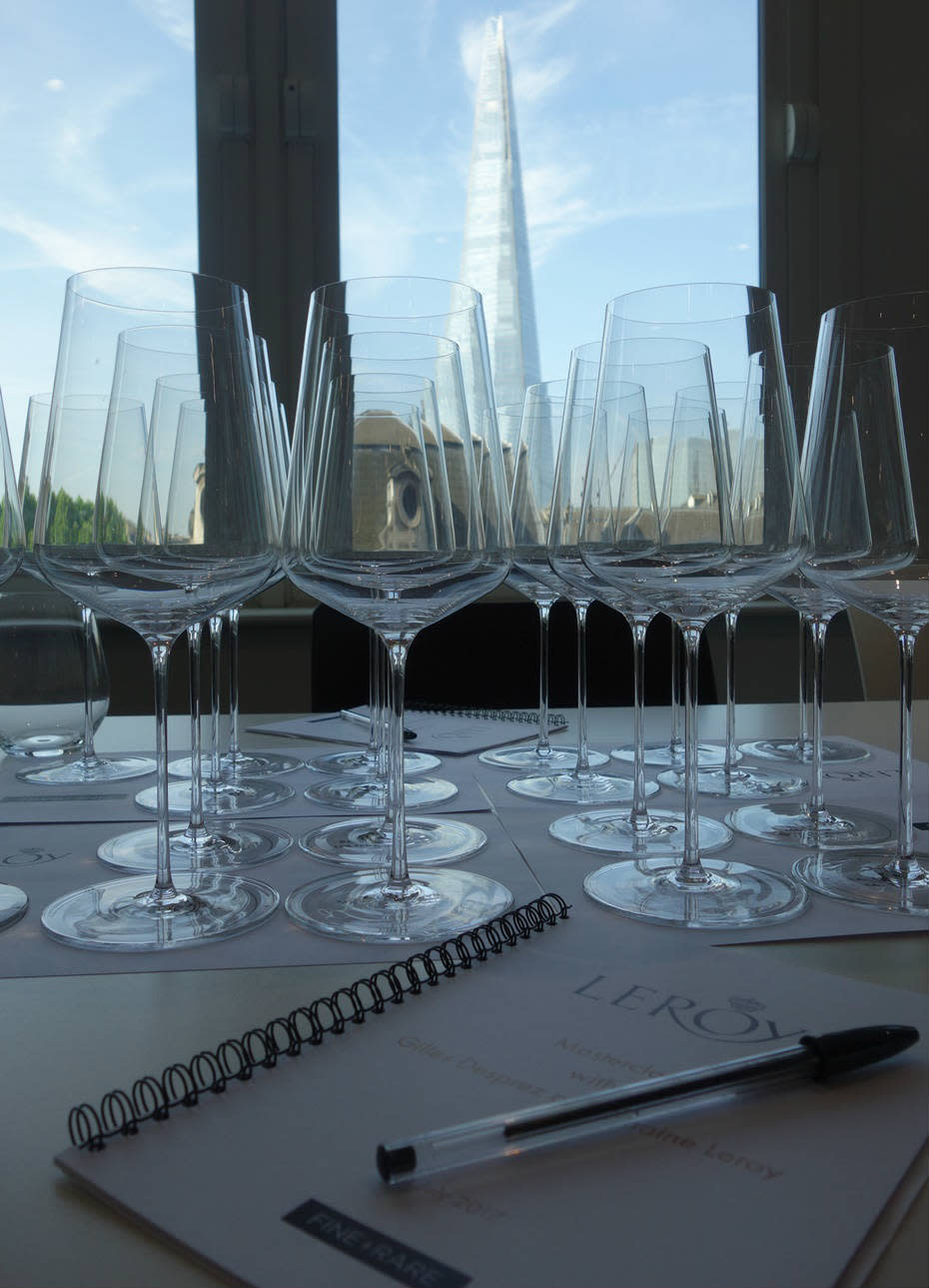