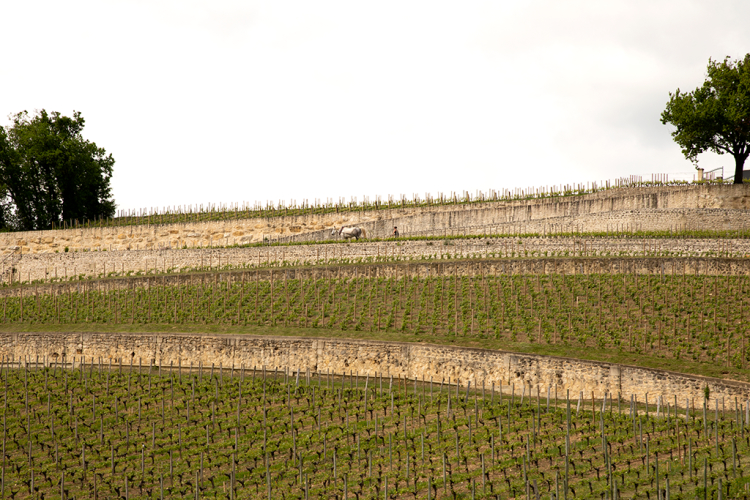 The 2021 growing season in Bordeaux was in complete contrast to the previous three vintages. Gavin Smith runs through the key moments that shaped this unique year

For good or for bad, the 2021 was a vigneron’s vintage, a year that required every bit of nous to circumnavigate the many issues that plagued the growing season. With an early budbreak and one of the latest harvests on record, it was a long and exhausting vintage for everyone involved. This was by no means a vintage that made itself – and its success was determined by the actions of man not nature.

Whereas normally there tends to be quite a bit of variation between the sub-regions of Bordeaux throughout the growing season, in 2021 things were decisively challenging everywhere. All were initially threatened by frost, followed by mildew pressure, excessive rainfall in June, cool summer temperatures and a general lack of sunshine throughout the spring and summer months – only to be rescued in the final sunny weeks leading up to harvest. Some unlucky enough (mainly around Sauternes) also suffered hail damage prior to harvest. Despite the homogenously bad weather, the varying soils and varieties throughout the region all reacted quite heterogeneously, meaning some suffered more than others.

Such were the manhours required in the vineyard in 2021, production and quality were going to be badly affected. Bear in mind this was all still at a time when Covid-19 was still a pressure point for employment, as noted by a number of wineries we visited.

The mild and very wet winter brought an early and uneven budbreak, as early as 10th March in Pessac-Léognan and 15th March in Saint-Emilion – which was a full two weeks ahead of normal. This was followed by unseasonably warm weather, Ch. Figeac in Saint Emilion registered 25˚C, resulting in the vines’ quick acceleration of growth. With the vines already so advanced, the threat of spring frosts was all too apparent. Right on cue, temperatures plunged at night. The 6th, 7th and 8th April saw black frosts cause significant damage across the region. Those worst affected in the classified sites were in Sauternes and Pessac-Léognan – with some châteaux in Sauternes witnessing their entire crop wiped out. The threat of frost was a prolonged agony for many, lasting right up until the 5th May, with temperatures recorded as low as -5˚C. For the Moueix estates in Pomerol, the combination of wind turbines and smudge candles could raise the temperature in the vineyard up by 2˚C – enough to protect the grapes. Other properties without such resources weren’t so lucky.

Ch. Margaux’s white wine vineyard is famously susceptible to frost. After installing a sprinkler system throughout the whole 8.5 hectares, the system malfunctioned, not working on 1.5 hectares where they lost everything (fortunately the remaining seven escaped harm). The frost damage was far from democratic, with estates within the same appellation seeing widely different levels of damage.

As always, the châteaux on the Left Bank closest to the Gironde such as Ch. Léoville Las Cases and Latour came away largely untouched by the frost. Further north in Saint-Éstephe, châteaux such as Calon-Ségur and Montrose were also unaffected – not just due to their close proximity to the river. The cooler clay-rich soils of the appellation mean budburst is always delayed, and with the vines not as advanced, damage was limited.

The risk of frost threatened Saint-Emilion for 10 days straight and led to a huge amount of work in the vineyards protecting the vines. The vineyards on the lower plains were worst affected, Croix Canon for instance, while Ch. Canon and neighbouring Ch. Berliquet up on the limestone plateau were spared, due to the vineyards’ fortunate south/south-west exposition – the brow of the hill protecting the vines from the freezing northeasterly winds. 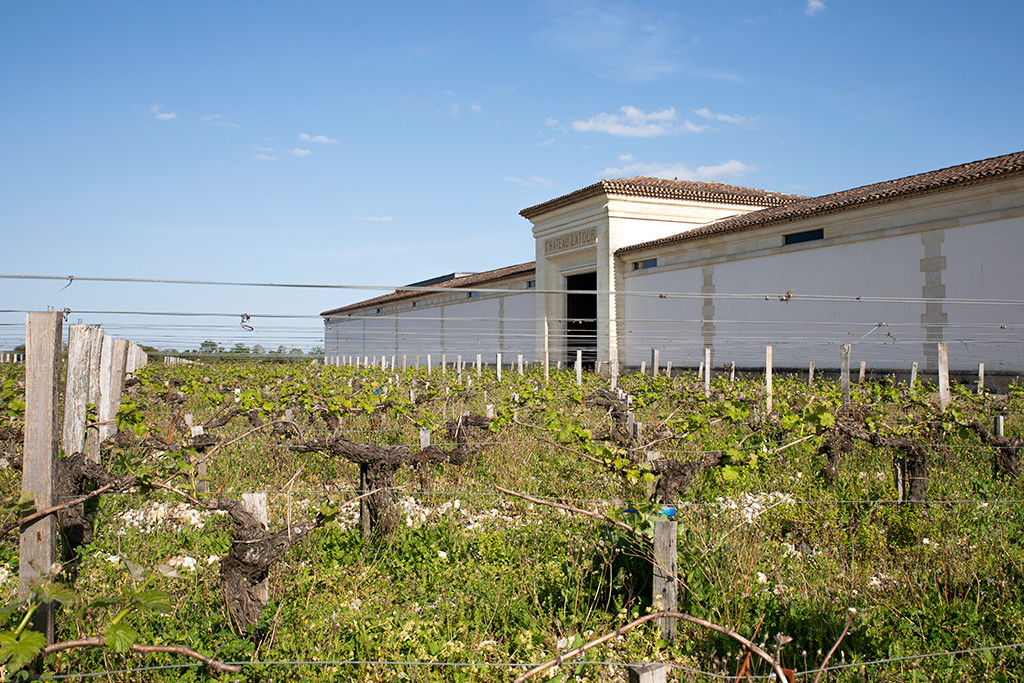 Vines basking in the sun at Ch. Latour

If there was one moment of calm throughout the 2021 growing season, it came at flowering. Clement, dry weather engendered successful flowering, though rains arrived at fruit-set, leading to coulure for the Merlot.

A huge deluge fell in June – as much as three times the month’s average rainfall. The damp, cloudy conditions saw the widespread outbreak of mildew that remained throughout June, July and into August.

Bordeaux’s proximity to the Atlantic and the naturally high levels of humidity this brings have always made it susceptible to mildew, but for many vignerons we spoke to, this was the worst outbreak they had ever seen.

The poor climatic conditions saw coulure and millerandage (the development of fewer and differently sized berries) badly affecting the Merlot on the Left Bank. This is why you’ll see such high proportions of Cabernet Sauvignon in the blends this year – with Cabernet being much less susceptible to both conditions.

Despite the blanket attack of mildew, its effects varied from property to property. Ch. Margaux believed the mildew outbreak was the worst they had ever seen, yet for them, it never reached the grapes, only the canopy – allowing them to protect the fruit from damage. Perhaps their largely Cabernet Sauvignon plots made it easier to protect; Merlot certainly wasn’t so lucky. Further north in Saint-Julien, Ch. Ducru-Beaucaillou chose to leave the grass cover throughout the growing season to soak up the humidity and reduce the rain splash which spreads the mildew to the vines. Many sprays later and the yields were still significantly impacted; their Grand Vin is 98% Cabernet Sauvignon (the highest proportion ever) and production is the lowest on record, cropping at 20hl/ha.

Ch. Pontet-Canet in Pauillac was devastated by mildew in 2018, losing two thirds of their crop. Despite the bigger outbreak in 2021, production was down only 15% – clearly having learnt how to better cope with the issue. The estate’s Justine Tesseron emphasised that you had to react fast to protect the grapes – you had to get out into the vineyards immediately after each rain episode to stop the spread. It was the year their newly built “tisanerie” came to the rescue, making them much more efficient in preparing their biodynamic sprays and reducing the overall impact.

Many estates including Ch. Cos d’Estournel and Calon-Ségur carried out early de-leafing to reduce the impact of the disease. It was a huge risk. If the climate switched to more intense sunshine, the crop would have suffered significant sunburn. But the intensity of the sun, fortunately for them, was never that strong.

With such high levels of rainfall in the summer months, the vignerons faced their next issue – a slow and uneven véraison. That moment where the energy of the vine switches from producing its canopy to ripening the grape is set off by a period of hydric stress – something which was not forthcoming in 2021. An event that typically takes place over two weeks was spread over four. The high rainfall also meant bigger berries and dilution was a concern, particularly as they edged towards harvest, worried the skins could burst and rot would set in.

Fortunately, things finally started to dry up in August and, while temperatures remained mild, the grapes pushed through véraison. The September weather finally brought some hope for the vintage and, according to many vignerons, was their saviour. Sunny days and cool nights were ideal for grapes to concentrate, retaining freshness, while producing the beguiling aromatics that are so distinct in the 2021 wines. There was a little more rain in mid-September, most notably in the Médoc, which brought concern over rot, but any significant damage was held off by a dry and sunny October. 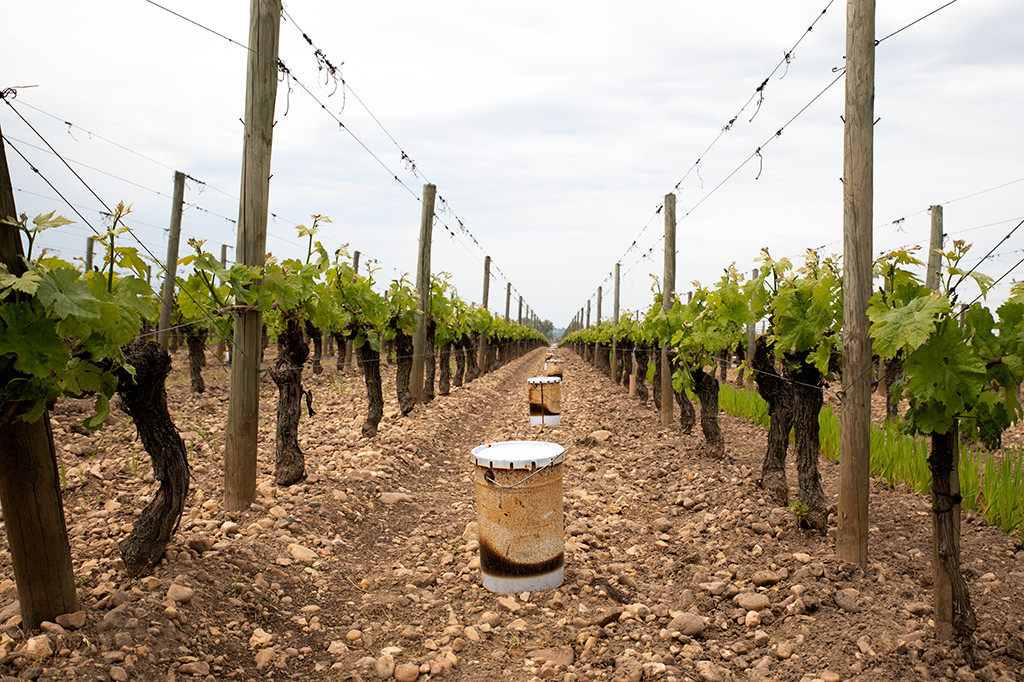 Smudge pots or "bougies" between the vines, on hand to offer protection against frost

The northern appellation of Saint-Estèphe was noticeably drier than appellations to its south, with hydric stress starting in July and “perfect weather” followed in August according to Ch. Montrose’s Lorraine Watrin. She compared the growing season to 2014, which was particularly successful in the appellation. By the end of September, throughout the regions, most of the Merlot was picked.

Of course, the Sauvignon Blanc and Sémillon grapes, capable of growing in much cooler, wetter conditions, were much less affected by all of Mother Nature’s shenanigans. For the estates that avoided the frost, the whites reached good volumes and the fresh temperatures of the growing season proved ideal for the varieties. The whites were largely picked in the first two weeks of September and the top examples proved exceptional.

For the reds, Mother Nature had one more card to play. Weather forecasts for the first weekend in October predicted heavy storms and more rainfall. With the large berries close to ripeness, a heavy storm could decimate the later-ripening Cabernets and would prove catastrophic for many on both the Left and Right Bank who rely on large proportions of Cabernet in their wines. With little choice, most ran the risk, and held out picking until the storms passed. Thankfully Mother Nature’s trump card was never played. Amazingly, the forecasters got it wrong, and the storms never came. Finally, the Cabernet was picked under sunny skies. Many châteaux such as Calon-Ségur held out as long as possible and were harvesting right up until 13th October – their latest harvest since 2012.

What is extraordinary about the 2021 vintage is the complete inverse effects of the previous three years. Three vintages of relative drought, plagued with concerns over rising sugar/ alcohol levels, vines blocked from maturation due to hydric stress, and a genuine concern that the wines would lack full phenolic maturity, due to the compacted ripening season. Every one of these concerns was turned on its head in 2021, producing wines that are the opposite of the 2018, 2019 and 2020s.

This unique season has put technology advances in Bordeaux to the test – from weather stations, UV boosting to state-of-the-art machinery – and at its best, they’ve defied the odds. A couple of decades ago, a growing season like 2021 would have produced very little wine at all, but today the Bordelais have proven that man can – at least for now – manage almost everything Mother Nature throws at them. And, most importantly, still produce wines of striking finesse and aromatic charm.

Pre-order wines, browse all available releases or read more about Bordeaux 2021, including our overview and a more detailed breakdown of the vintage by commune – including recommendations 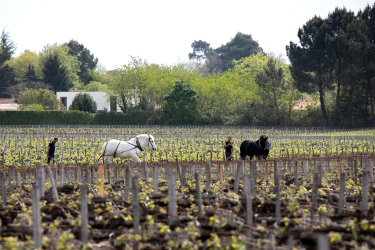