Following on from our Bordeaux 2018: Early Vintage Insight from the Producers report published last week, we have since received further reports from both Pomerol and Margaux which we wanted to share you with.

Château Margaux sent us a quick note this week stating: “2018 is an incredible vintage. We have produced the most concentrated wines ever and they look quite incredible.”

On the other side of the river in Pomorol we had a full report from Château La Conseillante, who are equally excited by the 2018 vintage. They explained that following a difficult start to the year, with plenty of wet weather and coulure, the vintage was saved by a hot and dry summer.

“The profile of the wine has been determined by the long rainy period before the summer, which ensured fresh fruit aromatics, and the severe summer drought and hot weather, which brought about concentration in the berries.  When you compare with 2016, the rainy weather was similar, but the drought was less marked. And then towards the end of the 2018 cycle, we had a dry east wind which concentrated the juices further, and the result was of course a lower yield.

We had a wonderful “Indian summer” so we had the time to pick every parcels at the right maturity. We started picking the Merlot on the 19th of September and finished on the 1st of October. The Cabernet Franc was picked on the 4th of October - 6 days for just 10.8 ha in production!

2018 is in fact a big wine. It has more concentration with bags of tannins. 2016 has great tannic structure, but the 2018 had a tannin index of 100, which is very high and unparalleled at La Conseillante. We had to make a very soft extraction and we made the fermentation in a lower temperature as usual (26°C VS 28°C) to preserve the balance and elegance of the wine.

The sensation you get is one of freshness and at the same time of opulence and richness. The tannins are suave and velvety. When my boss tasted the wine the other day he just went “wow”. It’s so good and delicious to taste even now. It’s so aromatic and already seductive."

The F+R team are out in Bordeaux this week securing a first-hand early look at the 2018 vintage for ourselves. We will update you with more news on our return... 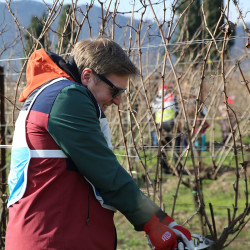