Behind the Bottle - 2018 Releases from Descendientes de J. Palacios

We have been huge fans of the wines from Alvaro Palacios’ Bierzo estate, Descendientes de J. Palacios, for many years and following the latest release of his spectacular 2018s we wanted to look behind the bottle to find out what is so special about these wines and the region of Bierzo.

Alvaro Palacios is one of the world’s most respected winemakers, having successfully produced world class wines on sites and within regions of Spain that prior to his influence remained largely forgotten. In a relatively short time, the wines he has produced in both Priorat and Bierzo have had a huge influence in raising the reputations of both of these regions to world-class status. These days these wines have become globally recognized as on par with some of the world’s finest wines.

Alvaro grew up in a family with winemaking ties going back centuries. Growing up in his family's winery in Rioja it wasn’t until he left to study oenology at the Bordeaux university that he got a taste for fine wine. During his studies he got to work at Petrus and this influence sparked off his imagination returning back to Spain looking to produce a wine of similar standards.

Alvaro’s rise to fame originated with his involvement in the clos-led revolution of Priorat in the early 1990s. This movement initially started off as a handful of winemakers who planted new clos (walled) vineyards in the most ideal sites in the region. These included Clos Eramus, Clos Mogador, Clos Martinet, Clos de l’Obac and Clos Dofi, which for the first few vintages vinified the wines together to produce one wine under the five different names. From 1992 onwards the wines were vinified separately. The next breakthrough for the region was bringing back to life ancient vines in the region. The first to do this was Alvaro Palacios who produced a wine called L’Ermita, made entirely from very old vines. Very quickly L’Ermita reached cult status when it received some of the highest ever scores for a Spanish wine from wine critic Robert Parker.  This chain of events in quick succession very quickly put Priorat on the world map. Palacios’ l’Ermita now costs upwards of $2,500 a bottle, and sits alongside other top wines from the region.

By the late nineties Alvaro’s attention turned towards Bierzo and he went into partnership with his nephew Riccardo after they both saw the potential in the region. With similar intentions to the single plot philosophy adopted in Priorat it was not long before their wines from Bierzo were been applauded with similar aplomb!

Alvaro talks about wanting his winemaking to transmit the historical and cultural pulse of the region as much as the orientations, altitudes and soils of each of the single vineyards. He always believed the medieval monks had reliably discovered the best suited terroir for winemaking and was keen to follow in their footsteps and bringing back to life some of the finest forgotten vineyards.

On investigation of the region and the old vineyards that exist there they found the perfect spot surrounding the Bierzo town of Corullon. For Alvaro and Riccardo the vineyards in this region had the perfect combination of elements they were looking for: incredibly steep slopes, very poor soil with huge diversity from plot to plot and ancient vines of the native grape variety of Mencia.

They decided to name the winery Decendientes de J. Palacios in memory of Alvaro’s father who passed away shortly after they started the Bierzo project in 2000.

The winery produces up to five single vineyard wines called Moncerbal, Las Lamas, La Faraona, San Marti and Valdafoz as well as Villa de Corullon which is made up of a blend of the old vineyards and is available in larger quantities.

In 2018 only Moncerbal, Las Lamas and La Faraona of the single vineyard sites have been released along with the Villa de Corullon. Alvaro at the tasting of the 2018s thought that the vintage in Bierzo was spectacular! After a few tricky vintages the vineyards were in perfect health in 2018 producing the best range of wines form the sites since their project started in 1999.

On tasting the wines last month we were blown away by the quality, they were really explosive both aromatically and on the palate, an incredible energy running through them. The single vineyard wines are real “wow” wines and textually thrilling.

Alvaros describes the 2018 wines as “dangling from the thread of acidity, fine but very strong at the same time, made of water and nerve, of tenacity and charm.”  They really are incredible and should not be missed.

Watch out for our offer in the next few weeks... 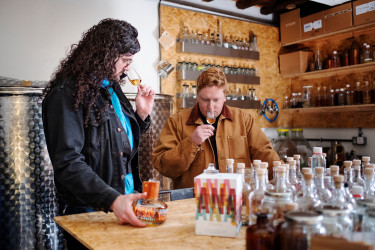