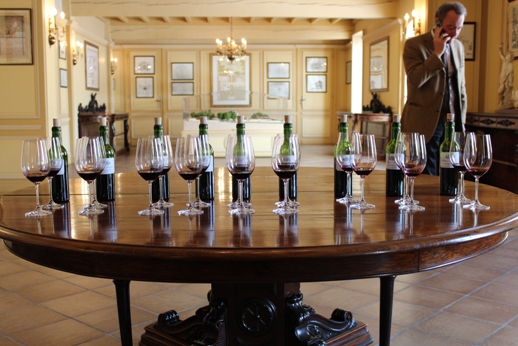 Me: “Paul, are you sure that sample is Merlot, it tastes a lot like Cabernet?”

Me: “Paul, are you really sure this isn’t a Cabernet?”

Paul Pontallier: “Hmmm, no, not any more. Let me check…”

It had started as a simple question in late Nov 2011 when I was at Ch Margaux tasting the recently bottled (and utterly perfect) 2009. I asked Paul Pontallier (Director of the estate since 1983) about the quality of the press wines (the tannic concentrated wine produced from pressing the skins and pips post fermentation which is added to the final blend in small quantities) at Margaux; with a broad grin he pronounced that the press wines are “extraordinary” and then with an even broader grin he said “and I can prove it to you. Come to the Chateau when we are blending the 2011 and you can see for yourself”

Not an invitation I was going to decline.

Fast forward to early February 2012, Bordeaux is cloaked in snow and the Bordelais are all terrified to get into their cars:

“Sauternes? No, I wouldn’t go to Sauternes in this weather, the roads will be treacherous”

"Pomerol? You really want to drive to Pomerol in the snow? I wouldn’t risk it if I were you”

You get my point.

Thankfully the staff at Margaux have made it to work and I am greeted by Paul and his right hand man (and Margaux Commercial Director) Aurelien Valance. They tell me that the actual blending had been completed just the day before and that they have selected 9 wines, including a press wine for me to taste: 2 Merlots, 4 Cabernet Sauvignons, 1 Cabernet Franc, 1 Petit Verdot and 1 press wine.

Nine component parts of the 2011 Ch Margaux blend, Paul Pontallier in the background.

“Nobody gets to do this” he says “I do it only for around four of my closest friends” (Alexandre Thienpont from VCC is popping by later to taste).

Tasting at Margaux is always a privilege but to taste the component parts of the blend at a First Growth is something I have dreamed of doing ever since my first visit to Haut Brion seven years ago and saw a map on the cellar wall showing all the vineyard plots. I asked (the then Director) Jean Bernard Delmas if he had ever thought of isolating certain plots and bottling them. Delmas looked at me like the annoying child I was (am and shall forever be) and said “Monsieur, this is Bordeaux, not Burgundy, here we blend!”

We start with two Merlots:

From a plot planted in 1982. This is an archetypal merlot. Sweet damsons and candied plums on the nose. Very rich and fleshy but with a lovely juicy acidity to keep it on the straight and narrow.

From a plot planted in the 1960s called “Eglise”. This is the sample that caused the discussion; it is so cabernet-like in fact so Margaux-like that I cannot believe this isn’t cabernet. Soon even Paul doubts its merlot-ness and has to go back to his map to clarify it for himself. It is arrow-like, linear, floral and with bright acidity. Pure Margaux expressed through merlot, really amazing stuff!

Onto the cabernet sauvignons

From 50+ year old vines on a plot composed of fine pebbles and very little clay. A classic soapy Margaux nose with a whiff of tar smoke. Fleshy and incredibly rich yet wonderfully floral and not powerful but very insistent.

From vines just 100 metres from Cab#1. Paul describes it a “the very heart of Margaux” and he’s absolutely right. A nose of violets, sappy cassis and even a whiff of the estuary. Incredibly energetic and long. Heart-stopping.

Paul tells us that this is “one of the most gifted plots”. It was replanted just 11 years ago and this is the first year it has made it into the final blend. This is pure silk but framed with formidable tannin (it has a tannin index (IPT) of 86 vs 63 in Cab#2). Fleshy and very powerful but without the length of Cab#2.

Lifted red fruit and spice, not obviously Margaux. Texturally this is very silky and with a lovely sappy quality. Fleshy tannin and a finish infused with wood smoke.

Next the Cabernet Franc followed by the Petit Verdot

Just six barrels of Cab Franc produced in 2011. This has the most incredible nose of violets and red fruit. Like a Margaux painted with a different palette of colours. Formidably tannic (IPT=100). By far the most aromatic so far and hugely powerful the long finish is drenched in mineral and toasty oak. You can imagine a grower from Chinon or Saumur tasting this and saying “bloody hell we’re never going to produce anything this good, we should just pack it in”.

16 year old vines from a massal selection of just 1.5 ha. For the first 14 years this plot had underperformed but now for the first time it is in the Grand Vin.

This has the most extraordinary aromatics of pepper, kirsch and liqueur fruits. Like Margaux viewed through the lens of Chateauneuf du Pape. Wonderful stuff!

And lastly the press wine

Inky black and with a nose of dark cherries. This is dense, weighty and outrageously tannic (IPT=115) but there is an extraordinary sense of harmony and balance: the very essence of Margaux. Sweetly fruited and with huge depth you can see how this beast can add “seasoning” to the final blend. Paul tells me that the final discussions involved what fraction of a single barrel to add to the final blend: no compromise in the pursuit of perfection.

My sincere thanks to Paul and Aurelien for allowing me to take part in this extraordinary tasting and I’m looking forward enormously to taste the final blend in April. 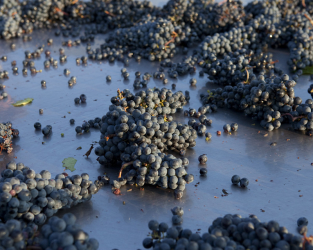