An Invitation to Dom Pérignon 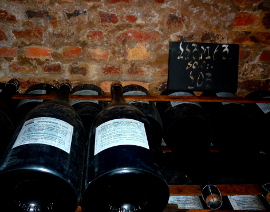 When a Dom Pérignon vintage worthy of special celebration arrives, the good folk at Moët-Hennessy invite a few select members of the British wine industry to the Champagne region for two days of decadence. The 2004, beyond any doubt, merited such an occasion.

Chateau de Saran, once a hunting lodge for Champagne royalty, is now the venue where the company entertains visiting royalty, dignitaries, VIPs, and friends. It was this distinguished and secluded spot, set amongst the vines, that we fortunate few were whisked away to for an unforgettable evening of gastronomic delight.

An aperitif of Dom Pérignon 2004, served on the balcony by waiters suited and gloved entirely in black, was very much on theme for the evening's menu – "Dark Revelation", the brainchild of Dom Pérignon’s Head Chef Pascal Tinguad. Much to the surprise of all, the 2004 vintage was the only vinous accompaniment to the exceptional 10-course meal.

The meal, which began with a bouillon of dashi and oyster jus, was hosted by Dom Pérignon’s charming and decidedly energetic winemaker Vincent Chaperon in the Chateau’s banqueting hall. The '04 was served in large crystal wine glasses (forget the traditional flute, Champagne with this much going on in terms of flavour and aroma should always be served in a proper glass). Interestingly, the bouillon turned the 2004's nose into intense smoke and minerality.

The second course, which rather decadently consisted of two separate dishes, began with tuna sashimi with jellied tomato juice, followed by grilled spider crab. Again, each dish brought certain aspects of the 2004's formidable aromatic profile to the fore, and in this course, conflict was the name of the game. With the tuna, the Champagne took on a yeasty, heady richness, whilst the crab detailed the sublime fresh fruit and floral aromas; the mousse becoming soft and creamy.

Two of the further eight courses deserve special mention. French caviar served on a chestnut crepe was easily the most perfect pairing of the night, allowing the ‘04 to display its full peacock’s tail of aromas and a savoury palate of sublime balance and structure. My note simply reads: "If I could, I would live on this".

For the dessert, we actually departed from the ’04 in order to taste the mature vintage, which Vincent believes the ‘04 will most closely resemble once it reaches the enigmatic "third period of peak drinking". If he’s right, those clients who are fortunate enough, or patient enough, to have some left in 30+years' time are in for a treat.

The 1970 Dom Pérignon Oenothèque was quite simply one of the finest wines I have ever tasted. A nose like mature Savennieres with greengage and a touch of honey, but with the added yeasty, smoky, seaweed and citrus fruit complexity of a Champagne which has been allowed to age in peace for four decades. The palate was long, still incredibly fresh and, when paired with the poached pear and mace desert, deliciously tart.

The next morning we emerged slightly bleary-eyed for a tour of Dom Pérignon’s Grand Cru vineyards and a visit to the Abbey at Hauvillers. It was in this tranquil and secluded corner of the world where the eponymous monk spent his life; the majority of which in pursuit of creating "the best wine in the world" – as he so modestly put it.

While the Abbey is now under the stewardship of the town, the cloister and the surrounding lands are still the private property of Dom Pérignon. Located on the first floor of the cloister is the library, which is today used to host tastings of some of Dom Pérignon’s rarest and most sought-after bottles. Led once again by Chaperon, the astonishing array of glassware set before each chair led us to correctly assume we were in for a very memorable experience.

Starting with a side-by-side comparison of the ’03 and ’04 vintages, one thing was apparent – be it an abnormal heatwave vintage such as ‘03 or a classic vintage of ‘04, Chaperon and his fellow winemakers know how to get the best from their grapes.

The ‘04 showed just as well as it had the night before: a nose of fresh peach and white fruit, the palate taut and full of saline, mineral flavour. In direct comparison, the ‘03 appeared even more extraordinary than usual, boasting a powerful nose of tropical fruit and smoke, a similarly densely packed palate of great structure and richness. Whilst both were open and extremely enjoyable, having clearly reached their first stage of peak drinking (six to eight years after the harvest), the next wine highlighted the benefits of a little maturity.

The ‘96 Oenothèque, lauded by critics, did not disappoint. Initially, a little muted, the nose opened to reveal layers of yeasty brioche, smoke and tropical fruit. The palate was exceptionally full-bodied and powerful, yet supple, showing the trademark Dom Pérignon elegance and fantastic length.

A black-gloved waiter then produced the rosés, each served in Burgundy glasses in order to fully appreciate their Pinot Noir-dominated aromatics. The ‘03, a deep colour of blood orange with coppery highlights, took a great deal of swirling and coaxing before it began to show a nose of very fresh strawberry and orange rind. In a similar style to the white ’03, the palate was powerful and rich, with a blistering rush of intense, interwoven flavours. Certainly a candidate for extended cellaring.

At first, the ‘02 could almost be mistaken for a white if it weren’t for its salmon-pink colour. Far more open, the initially floral nose boasted white fruit, then tell-tale raspberry and black cherry. The palate was all elegance, showing great power and persistence, distinctly sappy in a similar style of good Burgundy. Delicious now, but as before, the immediate comparison with an older vintage showed that time will reward those who choose to lay the young vintages down.

These more mature examples came in the shape of a bottle of ‘92 and ‘93 Oenothèque Rosé. Both had reached the second peak of their drinking life ("with optimised intensity"). The ‘93 showed a fascinating oriental nose of star anise, dried flowers and a background aroma we collectively could only liken to hoisin (think shredded duck pancake). The palate was svelte, full of dried red berry fruit, long and very tasty. The ‘92 was the ‘93’s polar opposite: a smoky, resinous nose of smouldering wood met with iodine and oyster. The high acidity on the palate carried a zesty lemon flavour through layers of dried red fruit ending with a gorgeous finish.

Then came the Magnums. As Chaperon noted (and trust me, I am now a firm believer) Dom Pérignon is always better from magnum. Recently, the market has seen a great demand for this format – the catch being of course that as it is released at least six years after the harvest, Dom Pérignon is ill-placed to suddenly cater for current fashions. Whilst they rejected the market’s demands for smaller formats in the early noughties because they simply "do not taste as good", Chaperon was keen to point out that they are now delightedly bottling a larger proportion of Magnums.

The next three wines, all at their third peak of maturity ("with optimised complexity"), demonstrated that patience really does pay off.

Whilst the ‘70 Oenothèque we had enjoyed the night before had been chiefly about the nose, it was the palate of the ‘71 Oenothèque magnum which reigned supreme. It was a lesson in texture – the intense, taut, yet juicy acidity combined with awesome length and finesse culminated in something truly astonishing. The aromas of iodine, smoke and mineral were deeper and somehow more grown-up than in those we tasted previously, but nonetheless, it remained fresh and youthful. I say again though: it was the palate that showed the most bewildering depth of complexity and flavour, making this wine truly unforgettable.

Although I enjoyed it immensely, for the magnum of 1985 Oenothèque Rosé I scribbled down a rather hasty note which reads: "all elegance, nose of smoke and dried fruit, very good –moving on". "Moving on" because the ‘82 had just been poured in front of me, and even sat two feet away from the glass it was overwhelmingly powerful. Deep and rich in colour, the pronounced aromas of dried fruits such as prune, fig and orange were balanced with cocoa and nut, all interwoven yet wonderfully distinct. The palate mirrored the nose – at first a little full on, it developed and relaxed over the impossibly long finish to reveal awesome depth and complexity. To my mind, Champagne really doesn’t get much better.

After leaving the tasting (with of course, what remained of the magnums), we went to lunch at Moët’s guesthouse Le Trianon, where what was left of the rosé magnums, paired wonderfully with the scallop ceviche starter and the grilled tiger prawn and carrot puree main course.

A whistle-stop walking tour of Moët’s cellars followed, and then we returned to Paris for the Eurostar, where fellow members of our carriage threw decidedly envious looks as we finished the magnum of ‘71 Oenothèque – still delicious, but not done justice by Eurostar’s thimble sized Champagne flutes.

"So what did you learn? "asked our Fine Wine Director upon my return. Well, firstly, now that I’m on very familiar terms with the ’04, that it is definitely a vintage to stock up on. Secondly, Champagne really can make a perfect accompaniment to any dish. I’d heard it said before, and of course have enjoyed great food and fizz matches in the past, but Champagne of Dom Pérignon quality, really is more versatile than most of us give it credit for. Thirdly, that old bottles of Champagne, especially from the Oenothèque series, display as wide an array of complexity and flavour as any great wine of Burgundy or Bordeaux, with the added bonus that they often taste fresher and more vivacious. And finally, to quote expert Richard Juhlin: "It might sound snobbish, but all DP and Moët Vintage should be consumed as a Grand Vintage Collection or Oenothèque in magnums to do them full justice." It makes a world of difference. 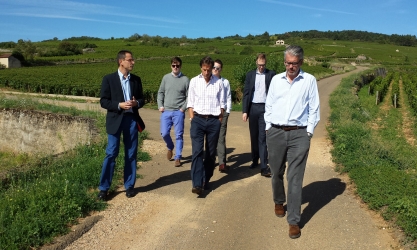 A telling trip to Burgundy: 2012 vintage