A Visit from Dal Forno

This month sees the latest 2012 releases from the mighty Dal Forno estate. A winery that has redefined the boundaries of Amarone, producing wines of extraordinary intensity and finesse every year.

We know in the past Dal Forno has not been afraid to declassify their top wine in a vintage they feel is not up to their exacting standards. Thankfully in 2012 Dal Forno were able to produce both their Valpolicella Superiore and their Amarone della Valpolicella and the results are mind-bendingly good!

On a visit to the winery last summer the F+R Sales team saw with their own eyes the meticulous attention to detail at the Dal Forno winery. Amarone production is already hugely labour-intensive but the additional checks made, berry by berry, at Dal Forno is nothing short of obsessive.

This week was the first chance we had to taste the new 2012 releases, with the Dal Forno team visiting us at the F+R London offices to showcase their wines and explain the vintage in more detail. Dal Forno Export Manager Marco Pinna explained that the 2012 is a celebration - since the vintage was very nearly perfect - but not without a touch of sadness too. The growing season was tainted by two bouts of hail which knocked out up to 70% of final yields in some parts of the vineyard, resulting in an overall reduction of about 30%. This is only made more painful by the fact that the maturity and overall quality of the grapes was virtually perfect.

Michele Dal Forno stated that “we had hail twice in 2012, the first and lighter in May, the other in July, much heavier unfortunately. Thankfully during the drying period (which is also vitally affected by the weather) was perfect in 2012 and the grapes dried up quickly and safely in such conditions. The vinification therefore was a bit earlier in 2012 (beginning of December), and as early as the fermentation this vintage was already proving to be a very good one”.

Michele expressed his delight on first tasting the wine at pressing, prior to their long élevage in oak barrels: “The wine had a deep inky colour, stunning concentration and overwhelming bouquet”. The élevage went smoothly with the wines aged for the first time in 100% new French oak for 24 months (in the past they have mixed American and French oak), then bottled and matured for a further 48 months prior to release. Due to the exceptional concentration and stability of the 2012, the extended élevage provides a sensational balance to the wine.

Asked to compare the 2012 with previous vintages, Michele could not, believing that “every year is singular and the wine is different eventually” with age. He went on to say “What is most important, in my opinion, is to keep a consistent style, so that the wine appears clearly recognisable to anyone”. Nothing quite tastes like the wines of Dal Forno - and the 2012 is no different. These are without doubt some of the most energetic, beautifully built fine wines to come out of Italy. The multi-layered texture, richness and phenomenal concentration makes these bold wines exquisitely balanced.

Don’t miss the release of the 2012s this coming week. Although production is significantly down in the vintage we will do our best to fulfil requests. 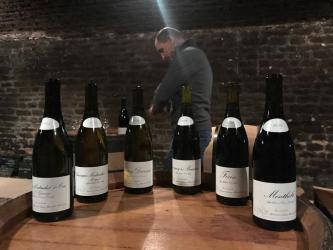