EditorialwinesA rather special tasting and a 2012 heads up

A rather special tasting and a 2012 heads up 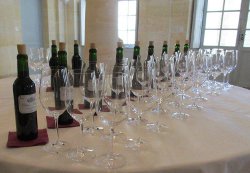 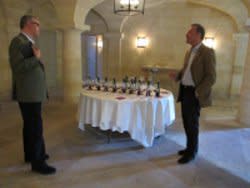 Last week Bud Cuchet and I spent a couple of days in what was a rather wet and cold Bordeaux. The reason for our trip was a very special invite from a very special man – Paul Pontallier of Château Margaux had asked us if we would like to taste the component parts of the 2012 vintage. This was quite clearly something that we simply couldn’t turn down.

The château at Margaux is probably the most beautiful in all the Médoc. Ducru-Beaucaillou may be more imposing, and Pichon Baron’s turrets are rather special, but none look quite so “royal” as Margaux. I confess that I have been bragging about the fact that we were allowed to park opposite the château itself rather than in the car park – it was that big a deal.

Paul met us in the tasting room where eleven samples awaited us. Two of Merlot, six of Cabernet Sauvignon, one each of Cabernet Franc and Petit Verdot, and one of “press” wine – this is what it sounds like it is: the wine from the juice that is actually pressed from the grapes, rather than the free run juice.

Tasting Ch. Margaux from any vintage, especially when tutored by the man who made it, is a treat and an exceptional experience but this was a new level.

The two Merlot samples came from two plots that were next to each other, or rather on top of each other – one close to the river, with more pebbly soil and the one further from the river with slightly more clay in the soil. The first has an average vine age of 55 years or so, the second 32. The difference between the two was remarkable: the first was brighter, fuller and the more elegant though Paul thought it maybe lacked a little intensity; the second, to my palate, showed more minerality and structure though was a fraction austere, more compact. This was already becoming a fascinating morning.

The first four Cabernet samples were what Paul described as “the heart of the blend”. My notes:

The next two Cabernet samples are not key components of the blend. The soil for these two plots has more clay, and the wines are that much more “chunky” as a result. They give the final blend a little more weight, though must be used with care – they must not interfere with the finesse of the wine. The analogy that we eventually decided on was that they “thickened the gravy”.

And finally the press wine. This is generally considered to be of inferior quality to the free run juice though this wasn’t apparent to us, such was the quality. This had a force to it, a density – some beef, and some real energy. Press wine of this quality is a blessing – and with the Petit Verdot this can add some seasoning to the final blend.

This fascinating tasting was followed by some treats from the bottle: 2003 Pavillon Blanc de Ch. Margaux, which one would do well not to pick as Le Montrachet if tasted blind – quite extraordinary, followed by 1999 & 2001 Ch. Margaux. I think Bud enjoyed the 2001 best – this is what I would describe as “complete” Ch. Margaux, though I found the 1999 the more seductive: this is just entering a second stage of maturity and has the tell-tale mintiness of maturing claret. Quite delicious.

Thank you Paul for such an enlightening and enjoyable tasting. 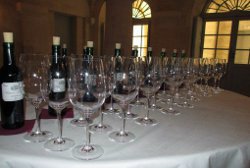