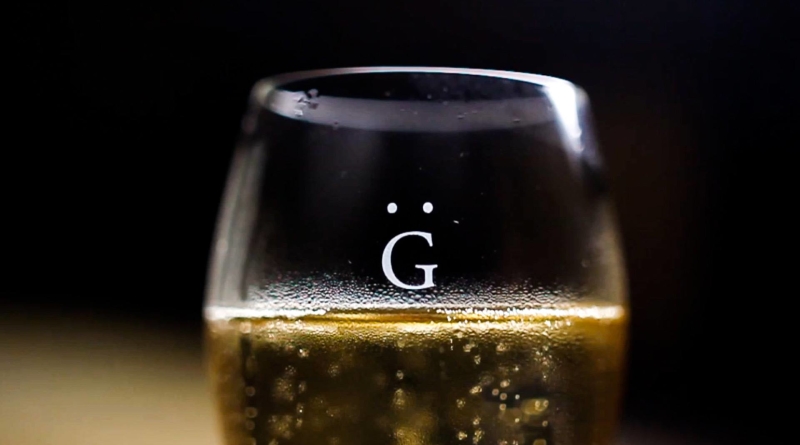 We explore the ultimate expression of terroir with Sébastien Le Golvet, the talented winemaker at Champagne Henri Giraud

We learn a lot from winemakers around the world but often it extends well beyond their vocation. No more so than with Champagne Henri Giraud winemaker Sébastien Le Golvet, whose philosophy as a vigneron extends far beyond the vineyard. Under the mentorship of his father-in-law Claude Giraud, Sébastien believes a total immersion in one’s surroundings is essential to better understand it. Working with something that is alive, Sébastien believes, requires the nurturing of a symbiotic relationship between himself, his vines and more broadly with the natural world.

Henri Giraud, one of Champagne’s most celebrated producers, takes this immersion philosophy to the extreme, from tasting their own soils to identifying varying terroirs of oak within the Argonne forest that produce the barrels for their barrel-fermented champagnes. Sébastien guides us through the extraordinary lengths they go to, his determination to reconnect with nature, and learning to trust in one’s own senses.

Inquisitive wine drinkers are eager to extrapolate why doing something in the vineyard or the winery leads to the flavours in the glass. When speaking to a vigneron it is rare to receive straightforward answers, but as Sébastien explains, it is a succession of small details. In Henri Giraud’s case, a minimum of ten-years of activity and adjustments go into a single glass of Henri Giraud champagne, as well as a lifetime of experience to help guide decisions throughout the process.

Sébastien compares his winemaking philosophy to climbing a mountain: there are many ways up and some options are more difficult than others, some can even lead to a fall, but each time he tackles that mountain, he claims he emerges with a better understanding. He remembers the pitfalls of previous vintages, or fermentations that go wrong, he takes inferences that might have led one way and chooses a different direction. Slowly finds the right path while remaining humble to the many routes available.

The multitude of factors at play in growing grapes and making wine, explains Sébastien, means a vigneron has to learn to trust one’s own sensibilities, His inferences are broad and multifaceted and not necessarily linked to winemaking:  He talks about how important  he recalls childhood memories of picking fresh cherries as a young boy, or the smells of his mother’s cooking, all providing him with a memory bank of senses that he still refers to today. 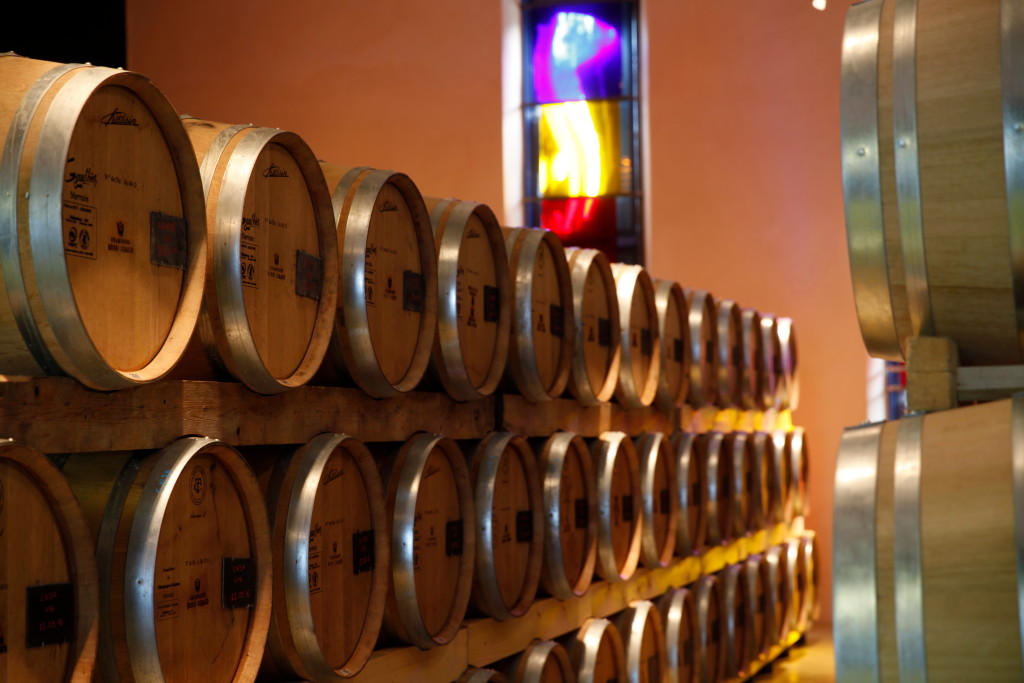 The domaine has had a fascination with oak from the Argonne forest, east of the Champagne region, since Claude Giraud took over from his father in the 1980s. Its top cuvee is even named after the forest (home to their barrels) of which 100% new oak is used in fermentation of their Argonne cuvee. Oak plays a central role across the range, with the sole exception the amphora-fermented Dame Jane Rose. Since 2016 they have stopped using any stainless-steel tanks at all in the winery, even with their “Esprit” entry level cuvee. Historically there were more than 150 coopers working in the Argonne forest producing barrels for Champagne production, but with the introduction of stainless-steel fermentation tanks, this tradition almost completely died out in the region. The cheaper more efficient effects from stainless-steel led to most Champagne houses giving up on barrel fermentation.

The obsession with oak at the domaine was not a whim. Initially Claude Giraud invested in stainless steel to test and compare the effects of different fermentation vessels on the wine. They also tested extensively with different types of amphora including cement and terracotta before eventually opting for sandstone jars, offering the right amount of porosity to imprint texture and flavours, they are looking for. The problem with stainless steel, in Sébastien’s view, is that it doesn’t retain the tension in the wine in the same way as oak barrels; they don’t believe it translates their beloved Aÿ terroir. The reasons might not be clear cut, but their evidence in extensive tasting was enough to convince.

Sébastien states that the exchange during fermentation is much quicker in stainless steel, just two months, whereas in barrel it is between six to twelve months. This long exchange of solids, yeast and lees, according to Sébastien, creates much better equilibrium in the wine, more texture and more complexity. The small volume vessel (the barrels are just 228 litres) also creates more power and intensity in the wine. Dealing with smaller vessels, according to Sébastien, also means more control of the product and less concerns with oxidation lowering the need for additions of sulphites (anti-oxygen agents) as well as giving Sébastien so many more options when it comes to blending. Each vintage he is managing 1000 + barrels. Whilst it sounds a lot, in Champagne terms this would typically amount to four or five large tanks (maximum 10 smaller tanks) which when considering the Henri Giraud domaine has over 200 different separate vineyard plots, fermenting these all together in stainless-steel tanks would lose the specific terroir inferences that remain a vital element to the Henri Girard philosophy. 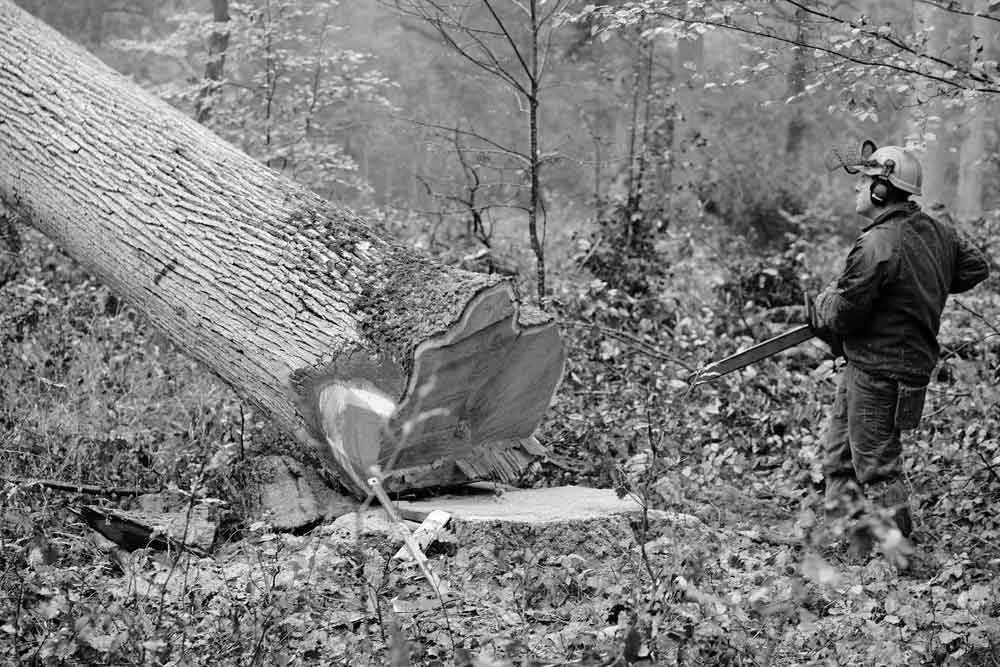 The terroirs of the Argonne Forest

While Krug, Bollinger and Selosse are strong advocates of oak barrel fermentation in Champagne, perhaps the most unique element about Domaine Henri Giraud is the lengths they go to in determining what oak they use. Henri Giraud believes the terroir of the forest plays an essential role in the final effects in their wines. The wood is sourced from the Argonne forest but within the forest based on the varying soils, different parts of the forest offer different expressions.

The domaine has identified at least ten distinct different terroirs within the Argonne forest. The three main regions they predominantly source from are Les Châtrices, La Contrôlerie and Les Haut-Bâtit. What is important about these specific terroirs, according to Le Golvet, is the geological positioning of the tree and the specific soil: a very poor, dry soil, causing the trees to grow very slowly producing wood with the tightest grain in the forest. The tighter the grain, the more delicate the effect and flavour of the wood has on the wine. For Sébastien, the wines of Aÿ are very delicate and while they want to incorporate the terroir of the forest into the wine, they don’t want to overpower it. These trees take up to 250 years to reach maturity and thus Henri Giraud has partnered with the French National Forestry Office to invest in replanting programmes. 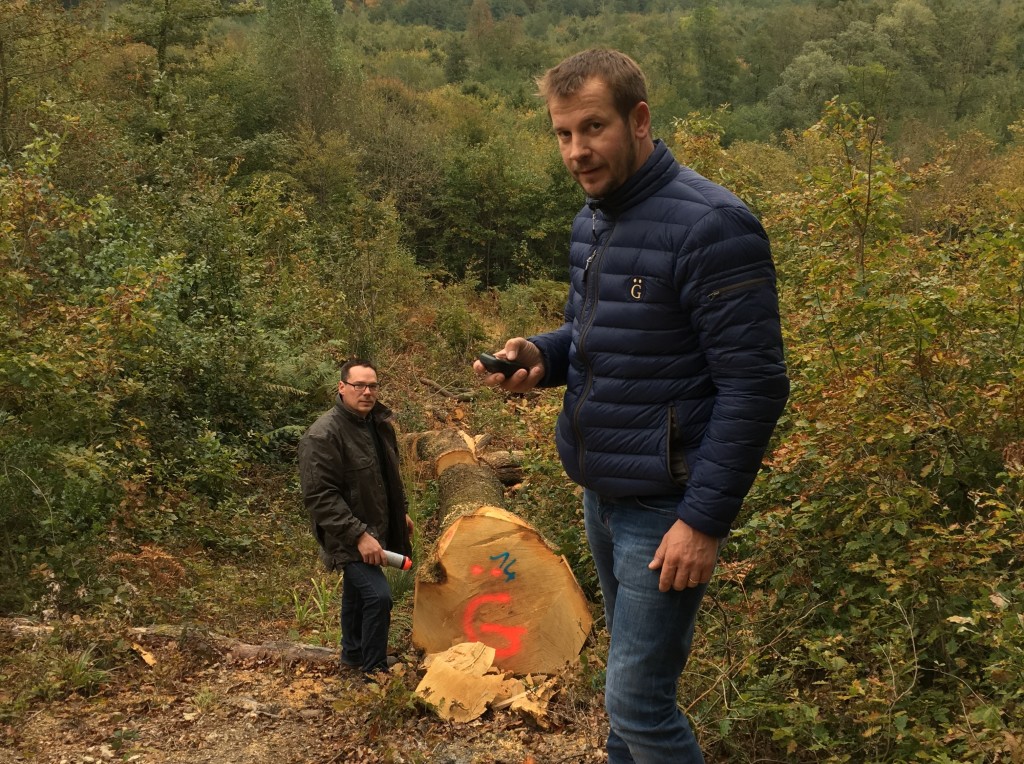 Sébastien in the Argonne Forest

For Sébastien, each of the terrorirs bring distinct characters to the wine. The oak from Les Châtrices can emphasize the effect of acidity in the final wine as well as a mineral freshness. The oak from La Contrôlerie brings red fruit and apricot notes. The oak of Les Haut-Bâtit brings power and depth and is often used in cuvees that lack the balance from maturity. How this all works they do not know, but again on tasting you can identify clear differences in the effect of using different oak from different terroirs of the forest. Sébastien is keen to share this with anyone who is interested. At Henri Giraud they make a point of making their Vin Clair wine (still Champagne wine prior to second fermentation in bottle) available to taste for visitors at the domaine throughout the year. They have the same cuvee fermented in the different types of oak for visitors to get a direct experience of how different they taste.

Bespoke barrel toasting at the domaine

One particular skill of Sébastien, seemingly fairly unique in the wine world, is that he toasts his own barrels. Trusting only his sense of smell and how specific toasts will affect different cuvees, Sébastien sources the barrels untoasted and toasts each one . Typically wine barrels are toasted for 30 to 40 minutes but he prefers a much lower heat but for around 90 minutes – sometimes longer –  depending on each barrel and using only his nose to guide him. When the toasting process starts, he describes the wood smelling of flour, and as it cooks further the aromas develop to white bread, then darker, wholemeal bread, the bitterness of the green tannins drops out from the barrel and croissant buttered notes develop.  He identifies the character he is looking for, depending on the different vineyard sites, to produce a delicate balancing act between fruit and wood. Even before harvest he has already decided how he will separate his 200 separate plots of vineyards, identifying which grapes will be fermented in specific barrels. 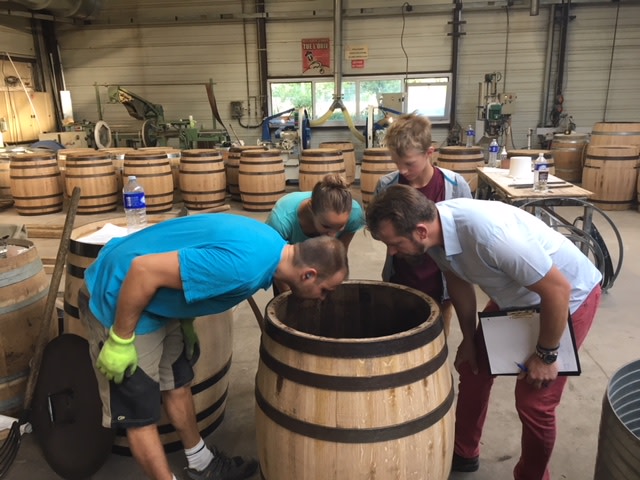 The toasting of the barrels at Henri Girard

The terroir of the Grand Cru village of Aÿ

Transparency is a key part of the Giraud philosophy. They were among the first Champagne houses to farm organically, their vines have been pesticide free since 1996. But whilst they are not officially certified, they believe recording the actual amount of chemical residuals found in the soil is a more transparent approach than a organic certification. They now identify on every bottle the molecular analysis of the wine via a QR code, identifying exactly what trace elements have reached the wine.

Receiving over 5,000 visitors every year, they are keen to share their philosophy of complete terroir immersion and transparency. Not only can you taste the different terroir effects on the oak, but they are keen to extol the virtues of the Grand Cru village of Aÿ. Sébastien explains how Aÿ has a distinct terroir, identifying key factors that resonate in the glass. The vineyards of Aÿ have a thin layer of very rich topsoil with high levels of iron oxide of which below is deep chalk mixed with clay. The south exposition brings sun intensity that “roasts” the grapes, but a small river creates a fresh breeze that blows across the vineyards, preserving freshness. There is a distinct aniseed taste from the wines of Aÿ that brings freshness; the density of chalk, its structure and flavour can be tasted in the mouth as well as providing a distinct salinity. A part of their terroir immersion at the domaine involves tasting these elements with visitors, mixing the chalk, the clay and the iron oxide with water and tasting the effects in the mouth.  It is clear, explains Sébastien, that tasting these elements helps you to understand where you feel minerality in wine – where each element sits in the palate. 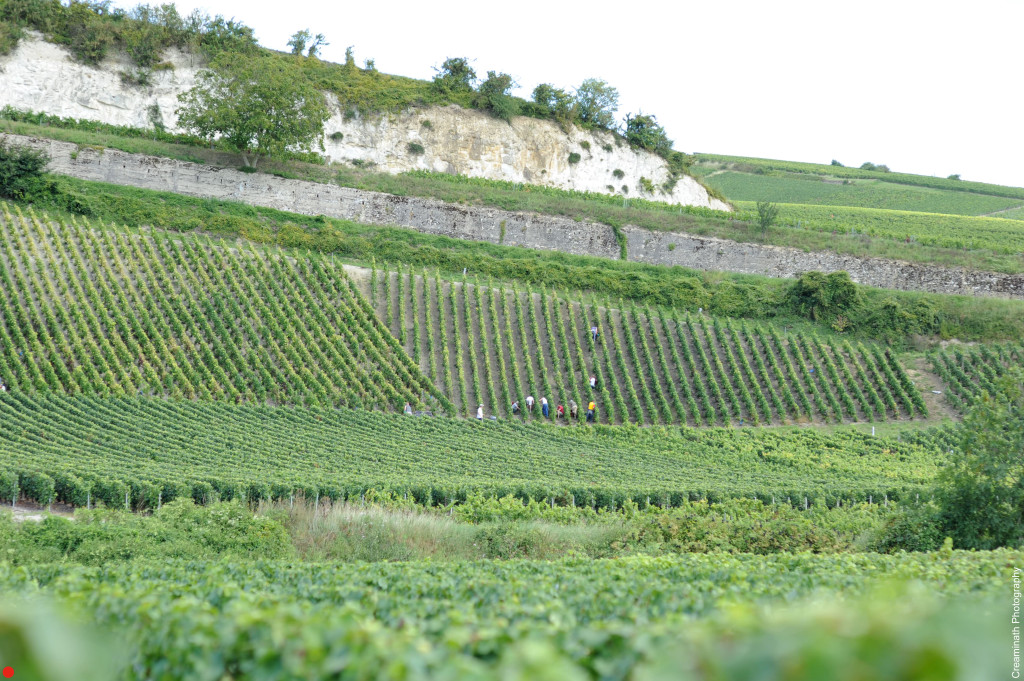 Sébastien’s conviction in terroir immersion and the power of one’s senses is best extolled in the raising of his children. He has three sons aged between seven and 16 and from a very early age he and his wife were keen to immerse them in nature, to encourage them to explore their senses, and to connect them to nature. They spend much of their time in the vineyards, in the forests and the kitchen. Sébastien recounts his memories of his mother’s cooking, the picking of fresh cherries from the tree – these are smells you never forget. He wants his children to savour these childhood memories, to help them build an extensive memory bank of sights, sounds and flavours. This immersion in their senses he believes is key to becoming a good vigneron of which he hopes his children (the 14th generation of the Henri Giraud domaine) will put into practice as Henri Giraud’s vignerons of the future.