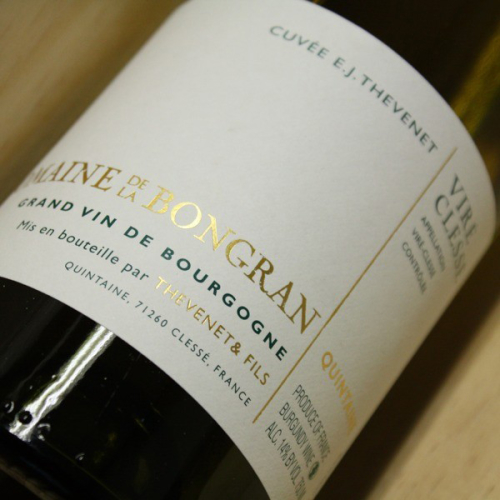 This is no ordinary Chardonnay from the Maconnais, the Domaine de la Bongran Vire Clesse has its own particular style thanks to some rather unique terroir and an uncompromising approach to its winemaking. The vines are organically-farmed on a 15 hectare estate planted on white marl in the hamlet of Quintaine, just north of Clessé. Jean Thevenet and his son Gautier take their time producing their wines and retain traditional methods passed down from generation to generation.

Ever since taking over the family estate in 1972 Jean has never been one to follow trends – keeping yields low (between 35-45 hectoliters per hectare) and picking purely on taste rather than relying on any data analytics from the lab. They have never been afraid to pick later than their peers due to their wines' amazing ability to retain acidity and freshness thanks to their unique marl blanche soils. Even in a warmer vintage like 2015, Gautier says “you don’t feel the heat, the marl soil always providing a bitterness that offsets the fruit. If anything in 2015 the heat of the vintage has only brought a really incredible structure to the wine.” On tasting, its true – the wine is incredibly rich and fresh and finishes with a wonderful mineral salinity.

For now, Gautier has not felt the bad effects of climate change, currently the warmer vintages are just bringing more complexity, structure and richness to the wines. For the 2015s, Gautier picked the grapes on the 17th September, which he states is not that much later than others in the region and perhaps just a week earlier than normal. Over the years he has learnt to trust in his terroir and even with such low yields (three times lower than the limits of the appellation) he needs to give the grapes time to reach optimum ripeness.

The Art of Élevage

Using no tricks to speed up the process, the wine ferments at a snail's pace under wild yeasts, producing a unique viscous-like texture and thanks to its distinct marl blanche soils a vibrant minerality and laser-like acidity.

Grapes are left to hang on the vines until they are ultraripe. The grapes are then gently squeezed in a Coquard press until every ounce of flavour and all the intensely honeyed aromatics have been harvested. The wines undergo ultra long fermentation and aged on the fine lees, and held back in the cellars at the domaine's expense, only being released when they are deemed ready to drink.

These wines have amazing ageing ability too. Just recently William Kelley (Wine Advocate) talked about how the 1989 Viré-Clessé is drinking at its peak now at 30 years of age!

Henri Jayer once said that a winemaker needs a chair. Less intervention, more reflection. This is somewhat mirrored in Jean Thevenet’s motto: “Terroir is to wine what a composer is to music. The winemaker being only the conductor.” In the cellars of Domaine de la Bongran intervention is minimal, with fermentations sometimes taking up to two years.

Despite Domaine de la Bongran being the most respected and appraised wine in the region, at the outset of the newly declared Viré-Clessé appellation in 1999, the wines of Domaine de la Bongran failed to qualify. The excuse from the IANO (administrative body) was that the levels of residual sugar were not considered “suitable” expressions of the region. Under these new appellation rules the wines had to have a residual sugar level lower than 2g/litre, forcing Domaine de la Bongran to declassify down to Macon Villages. Following the extreme temperatures in 2003 all producers in the region produced wines with residual sugar over 2g/litre and therefore collaboratively put pressure on the IANO to increase the allowance up to 4g/litre allowing Bongran’s Viré-Clessé to qualify under the more premium Vire Clesse Appellation.

For a body whose aim is to protect quality, specifically against over-cropping, the initial decision to omit the wines of Domaine de la Bongran seemed extraordinary, although it's fair to say the reputation of the winery precedes the appellation and if anything their inclusion has only elevated the status of the appellation.

The Viré-Clessé, also known as Cuvée Tradition, is the principal wine made at the estate, offering rich complexity, freshness and power with finesse. The wine is easily a match for the best of Puligny or Chassagne-Montrachet, they are examples of the heights that can be achieved with traditional winemaking methods.

The Cuvée Levrouté (or Levroutee) is their off dry wine typically around 18g/litre of residual sugar, only made in exceptional years, from part botrytised Chardonnay grapes, adding honey and truffle to the flavour profile.

Cuvée Botrytis is a stunning rich sweet wine, coming from principally fully botrytised grapes. The conditions necessary to make this wine is are exceptionally rare, the last vintage being 2006.

What the Critics Say

"one of Burgundy’s greatest winemakers… served blind, tasters tend to think they are Grand Cru white Burgundies from Puligny- or Chassagne-Montrachet." – Robert Parker

"The quality of what is produced here is mind-boggling" - Allen Meadows, Burghound

"Thévenet makes some of my favourite whites in all of Burgundy". – William Kelley, Wine Advocate

"quickly learned to love the wines… [which] are complex and fascinating, as age-worthy as many white Burgundy wines, perhaps even more so… Prices remain a fraction of what you would have to pay for a top Côte de Beaune, and I cannot recommend these highly enough." – Neal Martin, Vinous

"These are the wines of a genius." - Robert Parker

"Wine aficionados like to root for a winemaker who lives and breathes his calling. This is the story of a man who inspires just such support. He is Jean Thévenet... He’s obsessed with quality and makes terrific, highly distinctive white Burgundy…. Thévenet puts to shame many other producers in the Mâconnais." - Wine Spectator